Dynamite on the Diamond

by Donald B. Lucas 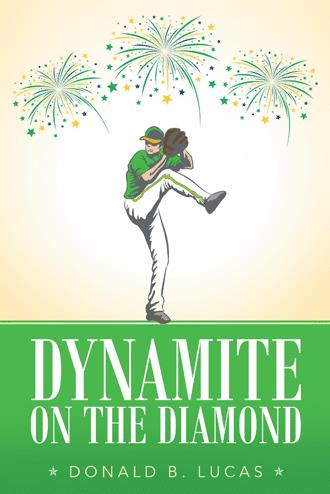 Dyno was a 14-year-old left-handed pitching phenom who caused many a batter to leave the batter's box shaking his head. His nickname, Dyno, came from his name, Thomas Nathan Taylor, and his explosive initials, TNT. It also came from his dynamite fastball and explosive personality.
Chip Newsome was Dyno's only friend and he was also his catcher on the AAU Under 15 baseball team called the Badgers. Dyno was bigger than most 14-year-old teens, standing 5’-10” with 165 pounds stretched over his muscular body. His thick dark hair, with wild strands sticking out from his hat, gave him a scary look on the mound. His blazing fastball and vicious curveball were even more frightening.
Coach Jim Robertson is the head baseball coach at nearby Forest Ridge High School. He saw a lot of young talent on this Badgers’ team that could help his program in the future. Because of this, he chose to coach this young talent. Coach saw Dyno pitch on many occasions last year when Dyno and Chip played on this same Badgers’ team. They were the only two 13-year-olds on the team and he knew they both had the talent to play for his high school team right away. Dyno always impressed him with his “stuff:” the scorching fastball; his sneaky curve; and his ability to hit spots in the strike zone. These skills were well advanced for a 14-year-old, especially a 14-year-old left-hander. As talented as Dyno was at throwing a baseball, there were personality issues that greatly concerned him. Issues so troubling, Coach Robertson feared they could tear a team apart.
Chip also had exceptional talent for a player his age. He was a tremendous defensive catcher, a solid hitter, an exceptional leader, and he was the only player who had had any success keeping Dyno in line.
Dyno had a cockiness about him that rubbed his opponents the wrong way, often to the point of verbal and physical confrontations. He was never on good terms with his teammates last year. He took most of the credit for their wins, rarely gave his teammates any credit for these same victories, but dished out the criticism when they lost. Things have started much the same this year, even though they have a better team with a better coach. The cockiness didn’t bother Coach Robertson. He always thought it was easier to take players down a notch when they were cocky and overconfident than it was to build them up when they lacked self-confidence. Dyno’s inability to be a team player is what caused Coach Robertson concern. He knew from years of experience that having a player on his team that only thought of himself could be a cancer that tore the best of teams apart.
This year's Badgers had a lot of raw talent, but talent did not always produce wins. The Badgers needed to learn to play together as a team and to develop chemistry. Right now, Dyno was preventing this from happening.

Dyno is a fourteen-year-old pitching phenom. Chip is his best friend, a highly skilled defensive catcher, a solid hitter, and an exceptional leader. Chip is also the only player who can keep hothead Dyno in line. Together, they’re the star players on the under-fifteen baseball team called the Badgers.

High school baseball coach Jim Robertson sees the Badgers’ talent so agrees to be their coach, shaping these young athletes into stars. However, Dyno proves to be a problem. He might be a gifted pitcher, but his cocky and negative attitude leaves much to be desired—so much so that his teammates start turning against him.

Coach Robertson knows a player like Dyno could tear a winning team apart, so he enlists Dyno’s best bud. Chip needs to help Dyno work through his personal issues to build trust and chemistry with his team. The Badgers could go all the way to the top if they find a way to work together and support each other, because talent alone does not produce winners.

Donald Lucas was a teacher, coach, athletic director, and elementary and middle school administrator. In addition to his career in education, he was also involved in officiating youth league, high school, and college sports for over fifty years. Twenty-one of those years was spent as a Division I coordinator of football officials. This is his first book.