A Novel Inspired by Actual Events 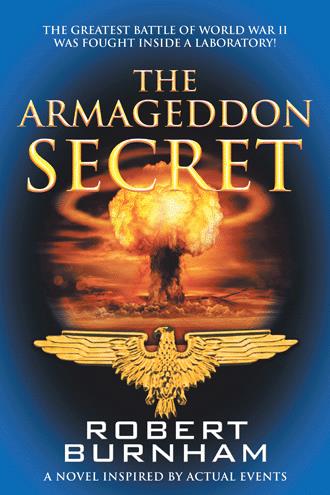 Oberstleutnant Schoe tapped his hand on the diagram and swung his foot as if kicking an imaginary ball. “So now Doctor Hahn has informed the Germany military of this super bomb possibility. Think of of it this way: If the Nazi atomic weapon can change every atom of this new element carolinum into energy, then one of these bombs with a few kilograms of it would be equivalent to exploding ten thousand ordinary bombs every single day for fourteen years!” “Schiesse!” Born shouted, his face crinkling. “Now imagine,” Schoe continued, “Hitler, with hundreds of these bastards in his criminal hands!” A collective murmur went around the table, heads shaking side to side, eyebrows raised. “It’s all coming into being. They’ve decided to call the atom research center in the Kaiser Wilhelm Institute complex Virus Haus to scare off anyone thinking of snooping around.” “And so,” Beck asked, “when does your drawing there come to mankind?” “Very soon, unless we get off our asses and do something.” Schoe dropped his gaze and crushed his cigarette into a large glass ashtray already partially filled. “What ‘something’ do you have in mind?” Schoe dragged his chair away from the table and sat slowly, looking down, unable to meet Beck’s eyes. “Sir, I have nothing more to offer you,” said the SS lieutenant. The subterranean hideaway was quiet. Alex Drake felt his muscles tighten as he organized his thoughts. He gripped the edge of the table and stood. “As your new collaborator, I can offer fresh eyes—an outsider’s viewpoint.” All faces turned toward him. “Since nobody else seems to have any ideas, let’s hear yours,” said Beck. "Maybe it’s all right there in front of us,” Drake said in a clear voice. “That ‘moderator’ name up there—whatever it is, it must be bottled-up to stop them from being able to convert the uranium to super-explosive. Find a pathway to dupe the German atom scientists, throw them off, keep them from discovering how to create carolinum. Failing at that, we’ve got to exterminate Hitler before he has access to any of these bombs. Replace his pond scum pals with a new government, and the madness stops. And finally—the Nazis can’t be allowed to go forward with making these bombs all alone, without other nations knowing about it and creating equivalent weapons. In America, we’d call that a "stalemate." We push the United States to develop its own atomic bombs to counter the Germans. Do all these things simultaneously—make it a scattershot—and one’s gonna work.” Drake sat down and looked around at the others. Sondra Spier was staring at Drake, her eyes wide and shining. Goerdeler crossed his arms. “We respect your intelligence, Drake, but as you’ve stated, you lack knowledge. There’s a big difference. In normal times, I’d declare that you should gain much more understanding before you speak out. But these times are far from normal, meaning I agree wholeheartedly with you,” he said. “Success with just one of these ventures would prevent world destruction by Hitler. General Beck, you’ve got to make someone responsible for each of these routes Drake proposes.” “And soon!” Colonel Oster said. “To say time is of the essence is a gross understatement. I know I speak for us all when I say we're pissing fear about this thing, with apologies to the lady in our presence.” Beck looked around the room, studying each person’s eyes as he collected his thoughts. “We’ll do it like this,” he said. “We immediately alert the Western Allies—especially America, with its scientific and industrial might. Oster, you’re in the best position to identify a key person in America to contact and alert to this threat, using Drake’s contacts in America. Schoe, you’re the scientist—I’m putting you in charge of stopping carolinum production. And Goerdeler, you will come up with a workable plan to assassinate this monstrosity who calls himself the Führer. You have your assignments. All infinitely risky, but look at Schoe’s diagram—we can’t let this put the whole world in a grave. Here we are. Our little group finds itself at the most crucial turning point in human history. Now go. We meet again in exactly one week. Schoe, Goerdeler, stay here.” * * * The three remaining men sat silently until the door slammed shut. A gray cloud of stale smoke hung from the ceiling. “And now we have a most unusual new member,” declared the general. “Your first impressions?’ Mayor Goerdeler crossed his arms before speaking. “Smart, very smart young man. He's not hindered by the German mentality of total obedience, our unquestioning deference to hierarchy. There’s a strange quality about him. Something about his eyes—something I can’t yet put into words.” “Drake was right,” said Beck, “when he said that he has the clarity of coming to us from the cold outside, and he isn’t afraid to speak up.” “Very bizarre to have an American as part of a German Underground unit,” said Schoe. “Without his life experiences, this would make no sense. But now we have our link to the neutral and mighty United States. We will need that link soon to work against Hitler’s super-bomb scientists.” “Adversity makes strange bedfellows,” General Beck declared. “Go home and try to sleep tonight. I hope the common sense of the morning agrees with our decision.”

1938: In a Berlin lab three years before America’s entry into World War II, Hitler’s scientists were first on the planet to release the atom's energy. Suddenly, Germany was the only nation racing to find the secret to the ultimate weapon. If the Nazis’ quest couldn’t be checked, civilization would vanish. German general Ludwig Beck’s heroic Black Orchestra Underground fighters swore to topple Hitler before he extinguished humanity. That much is history. In the heart of the terror-slammed German capital, Alex Drake, an American expat journalist with an old and very personal hatred of the Nazis, is recruited by Black Orchestra. Their network of spies has uncovered the existence of Hitler’s atom bomb project, but no German atomic scientist can be trusted to help them disrupt it. They must have a channel to America to piece together the knowledge essential to block this menace as they battle the Gestapo, betrayal from within, and their own demons to stop the German atomic bomb. Success or failure of their struggle to derail Hitler’s ultimate weapon lies with the widow of a fallen Black Orchestra member. Her courage and intelligence will ultimately decide the fate of humanity. The keystone for creating the atomic bomb: The Armageddon Secret.

Robert Burnham is a licensed professional forensic engineer with two University of Michigan engineering degrees and is a member of the National Academy of Forensic Engineers and the National Society of Professional Engineers. An adjunct professor of technology and lifelong student of science and history, he lives with his wife Suzy in Ft. Myers, Florida, and Traverse City, Michigan. He is currently working on his next novel, The Oak Ridge Secret.