The Gospel of Creation 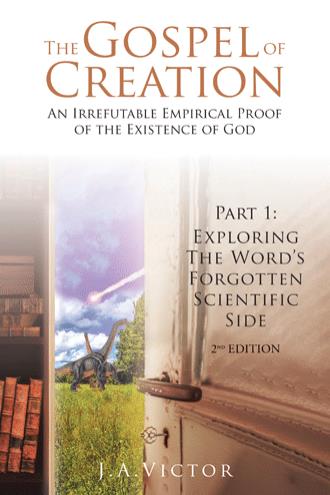 Chapter 1
St. Augustine meets Stephen Hawking1
There is probably no book in history that’s had a greater impact on human thought than the Bible. It is currently the basis of faith for over two billion souls. Its content is considered divinely inspired by over half of the world’s population. And given its enormous influence on Western culture, there are few places on earth that haven’t been touched and shaped by it in some manner.2 So with so many convinced of its divine origins, it should not be surprising that many throughout the ages have also thought that there is more to it than just a book, that hidden within its pages is a key that can be utilized to obtain even greater understanding.
St. Augustine, and many other early Christians, felt the recurrent numbers of Scripture may be the means of obtaining these hidden insights, but something prevented them (prudence perhaps)3 from taking it much further than that. It hasn’t stopped others though. But their attempts at finding this key, though many, have not, thus far, been particularly fruitful.
Consider the scriptural gymnastics performed by the Gnostics and the Kabbalists,4 for instance, in their quests for hidden truths; or all those self-deluded doomsday prophets we’ve heard of down through the centuries that claimed to have based their faulty predictions on rock-solid Biblical Accounting. And that’s not to mention those theorists of our own time who’ve given us The Bible Code and The Da Vinci Code (both of which have been thoroughly debunked, by the way).5 The list goes on and on.
All those failed attempts aside, however, given the multitude of those who’ve tried, is it not logical to wonder if their very human desire to unravel this mystery was not divinely instilled in them (and to some degree all of us) for the very purpose of our someday discovering this key? Whether or not you agree with this conjecture, in taking the leap and simply accepting the possibility that such a key exists, what should we expect from it?
Well, given what we know of the God of Judeo-Christian tradition there is actually a lot we can discern. First, we can be certain that, since God does not show favoritism to the highly intelligent, it should not be all that complicated. In fact, the Bible suggests it should be so simple a child could understand it.6 So that pretty much eliminates the beliefs of the Gnostics and all those other cultists out there who’ve based their theories on extremely convoluted logic. No, in the divine economy of Creation, Occam’s razor has always been the rule,7 and it should apply in this case, as well.
Additionally, on finding this key, the insights it gives us should not conflict with our traditional beliefs, either. If it did it would paint a picture of an inept Creator who was incapable of giving us the truth until we’d stumbled upon this key. No, the Bible, itself, tells us that it alone is sufficient,8 so this key should give rise to no new cult or religion,9 but rather support and corroborate the tenets of at least one that already exists.
And along those same lines, you should not be able to use the key to predict the date of the Second Coming (as so many from the past have tried). For the Scriptures are fairly clear that … as to the exact day or hour, no one knows it, neither the angels in heaven, nor the Son, but only the Father.10
And finally, you have to assume that once the key is discovered, God would want everyone to know of it and hopefully accept it.11 But in order for that to happen, there would have to be no doubt that it came from God. That is, it should come to us like a lightning bolt from heaven with no natural explanation that can be invoked to account for its existence.
Therefore, one great side benefit of this key would be that it provides us with a scientific proof for the existence of God. And wouldn’t that be a boon for the world?! And since it would also tell us which of the existing Bible based religions is the one established by God, imagine the possibilities! It wouldn’t happen overnight, certainly, but the potential for world peace is staggering. What, after all, would be left to wage war over if everyone adopted the same biblical moral code and acknowledged one religion, one God and one Lord?
All this may sound like pie in the sky meandering, but before scoffing at the idea, recall that Scripture does prophesy a time of peace and unity12 occurring after all the earth’s secrets are found out.13 You might also like to read the rest of this book, because the claim being made here is that this key actually does exist. And it was discovered, not by a bunch of monks laboring away for centuries in some secluded mountain monastery, and not by some short-sighted Creation Scientist either, but by an atheist (of all people) whose initial objective was to prove that no such key existed.14
So where should one expect to find it? Well since, God … is not malicious (according to Einstein, anyway)15 we can assume that it should be in a logical place. That is, it should be right where anyone else would place a key that unlocks the meaning of a manuscript: … in the beginning. And that is precisely where it was found, in the first chapter of the first book of the Bible. And doesn’t it make sense, when you think about it, that this might be the case for the Genesis account of the 6 Days of Creation?
I mean, our science tells us creation as described in the Bible took billions of years. And those who dispute it, the Young Earth Creationists, are correct in saying God didn’t need to take that long. But why even 6 days (as they claim)?

Of the many books in the Sacred Canon, there are but four Gospels. Yet for Christians, these Gospels are the focal point of the entire Bible. Indeed, there is little in the Old Testament, or the New, that cannot be understood at its highest level by contemplating the many teachings in the life of Christ, as presented in these Gospels.

But as dear as they are to Christians everywhere, who wouldn't trade them all away for one Gospel written by the Master, Himself? What new wonders might we expect to hear and what controversies might be cleared up through His direct involvement in our spiritual formation. It is a dream most every Christian has had at some time in their lives. And it is a dream that has some foundation, because the Bible actually does make mention of such a Gospel in several places.

But even without the Bible to tell us this, somehow we've always intuitively known that this Gospel existed, simply because (whether we realized it or not) we encounter it every time we interact with the natural world. It is the Gospel that the heavens declare and the sky proclaims (Ps 19.1), that is preached in all the creation that is under heaven (Col 1:23). And having been placed there by the Word, it is interwoven into that Creation like the seamless garment in which Christ, Himself, was attired.

Many throughout the ages have revered and pondered this Gospel, and the insights they've given us of it are many. But despite their efforts, no one has ever really cracked the code to fully reveal its contents. It may be that they were merely lacking in the necessary scientific knowledge, or perhaps the timing just wasn't right. Whatever the reason, with the discovery of the mathematical key called the 2/3rds Rule, this fifth Gospel is finally opened up for all to see. And it more than delivers on our expectations. reconciling mainstream science and Scripture on the subject of Creation and giving us answers to a myriad of questions, some of which we never even thought to ask. And if that's not enough, it also throws in, with no added effort, irrefutable (and falsifiable), scientific proof:

But in these troubling times, where good and evil seem to have become so intertwined, this Gospel's greatest feature may simply be in its timing. It comes to us like a love letter from God, reassuring us that He has always been with us and that His Word is as true today as it ever was. It may not always be what we wanted to hear, but it is, nevertheless, what we need to hear. It is the oldest Testament and it is the last Testament, it is God's Testament, and (in this, man's first successful attempt at deciphering it) it is ...

The Gospel of Creation.

A former atheist, former seminarian, Univ. of Mich. alumnus and chemical engineer by trade, J.A.Victor brings a unique and refreshing scientific perspective to the field of biblical exegesis. His research for the book series began from a fundamental discovery in 1992 that culminated, four years later, in a conversion experience punctuated by the epiphany that the biblical Creation epic did not conclude until Christ's declaration, "It is finished", at the Cross. This crucial, final insight made Victor's discoveries self-sustaining, transforming his role, in the process, to mere stenographer transcribing what a mathematical formula of divine origin was saying. And as might be expected, it has a great deal to say. To learn more please visit..https://www.gospelofcreation.com/part-1.