Nights of the Moonless Sky

A Tale from the Vijayanagara Empire 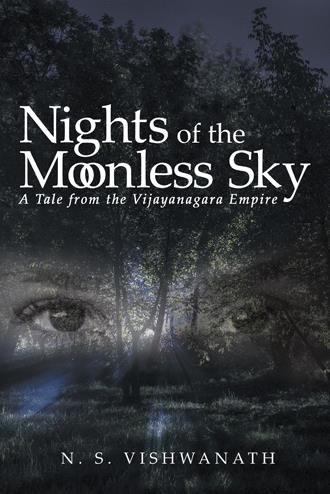 Overcome more by uncertainty than grief, Aadarshini too began to sob. Cheluvi stepped away toward the outhouse. Aadarshini followed her.
“Akka, you have taught me much about the ways of the world. Our husband is dead, and we are widows. But what is to happen next? What rituals was Giridhara alluding to?” she demanded.
“What can I say, child?’ Cheluvi explained. “We are a cultured family with reasonable traditions, unlike some where the duty of the wife to her husband is deemed to continue even in the afterlife.”
Aadarshini knew she was talking about sati. A neighboring woman back in her childhood had to undergo the ritual when her husband had died away from home. His widow, powerless to thwart tradition, was forced into a fiery death. A cremation pit was dug near the riverbank. A platform of sandalwood was laid out in the pit. The widow, alive but sedated into unconsciousness, was laid on the platform and covered with more sandalwood. When the fire was lit, a live woman turned to ashes, which were collected the following day and immersed in the river. The men who presided over the ceremony then performed several purification rituals to ensure a smooth journey for the departed souls. Aadarshini, just ten, had listened in horror as the women at the ashram recounted the episode. “Couldn’t the men in the family stop it?” she had asked, only for a bitter old woman to caustically reply, “Men? Who do you think establishes these practices, dear?”
Aadarshini, still standing by the outhouse, held a blank stare. Kalavati joined the two.
“There are several options open to us widows,” Cheluvi said, “but it’s our beloved Rajanna’s wishes that are paramount. And I have no idea what they were. Now, isn’t that strange?”
“Do you think he would want sati for us?” Aadarshini asked.
“I don’t think he would,” asserted Kalavati. “Why, even now we have widows living among us in Madhuvana, like old Lakshamma. Poor woman, she was widowed when she was just eleven. Her husband died young of a snake bite when he was defecating in the woods. Rajanna had stepped in and decreed that the family would care for her. Our traditions are most reasonable, and he was a man of reason. You, my dear, you have his young son to care for. He would not have disregarded that.”
Aadarshini broke down and couldn’t hold back her tears. She knew the men were now in conference, discussing the rituals that the three of them had to perform. The courtyard slowly emptied out. The children were brought back to their mothers. Cheluvi and Kalavati went back to Cheluvi’s room. Aadarshini had to get her mind off the proceedings of the evening. She began preparing a meal for Raghu.
“Amma,” the boy asked, “why is everyone crying?”
Aadarshini didn’t reply.
“When is Appa coming back, Amma?” Raghu pressed her.
“He has travelled far away, Raghu,” she replied, struggling to keep the poise in her voice. “The rains have been severe where he has gone. The rivers are flooded and difficult to cross. We must be patient. Don’t believe what anyone tells you about Appa. You are his son. Be brave like him. Never let anyone see you cry. He will be back when he can,” she said, holding back her tears as best she could.
Aadarshini could hear Sarala sobbing outside the kitchen. “Go home, girl,” she told her. “We’ve had a long day. Oh, how it started out, and how it has ended. Come back tomorrow. Go back home before the sun sets.”
Sarala and others like her who tended the fields or worked in homes lived in thatched huts spread across the plantation, away from Madhuvana. Aadarshini was aware that Sarala’s home was across a stream on the edge of Madhuvana, but she didn’t know exactly where. She had never been to her home.
Back in her room, she blew out the lamp by her mattress and lay beside Raghu. Sobbing intermittently, she told him a story from the Ramayana. Then she sang him a lullaby, one she had sung for him since he was born:
Sleep well, my Rama, sleep well.
You are the delight of your father, my Rama
You are the joy of your mother, my Rama
You are the scion of our race, my Rama
You are the pride of our people, my Rama
You will soon wear the crown, my Rama
If misfortune befalls you, my Rama
Your mother will always protect you, my Rama
Sleep well, my Rama, sleep well.
The soothing monotony of the melody never failed to achieve its purpose. The boy was soon fast asleep.
Aadarshini could not sleep. Her head hurt. She thought of Azam Khan. She was surprised, even a little disturbed, that despite her state of mind she could still recall his naked body, his scent, his taste.
“Ammaaaaa ...,” Raghu called out in his sleep often that night, and as many times, she patted him back to sleep.
“Narayana! Please guide me. I must raise him to be like his father and rule Madhuvana well,” she prayed through a sleepless night.
The next morning, Aadarshini came back into the portico after leaving Raghu in the zenana with the other children. Six men were whispering amongst themselves. They were the oldest men in Rajanna’s extended family and usually arbitrated, along with him, sensitive family matters. Outsiders were not privy to these discussions. There were no other women in the courtyard except the three wives. The servants had been asked to leave lest they eavesdropped and spread half-cooked truths. Aadarshini shut her eyes and chanted, I am in your refuge O Narayana! Cheluvi and Kalavati held each other, their hands trembling. Aadarshini fidgeted as she listened to the toothless Thatha Kanteeravaa, the oldest among them, who explained in a barely audible but compassionate voice that the advice he was going to deliver was a consensus arrived at after a sleepless night of deliberation.

It is the sixteenth century in South India and the Vijayanagara Empire is in the throes of a succession struggle that threatens to disrupt the peace of the realm.
Far away from the chaos, the splendorous estate of Madhuvana sits in relative heaven where its seventy-year-old patriarch, Rajanna, has just died. After elders decree that his widows are to perform an ancient ritual in which a widow is cremated alive, the lives of three people intersect. Aadarshini is Rajanna’s twenty-two-year-old third wife and mother of his heir. Azam Khan is Rajanna’s trusted bodyguard, left rudderless after the death of his master. Prabhakara Swami is the enigmatic temple priest who holds the strings that control the fates of others. When Aadarshini is thrust into a forbidding darkness, she discovers what it means to become the hero of her own story as destiny tosses her around like a straw in the wind. While events in the capital close in around her, she must seize her fate and overpower not just those who want to see her down, but also her inner demons.
In this intriguing historical thriller, the widow of a South Indian patriarch embarks on a journey of self-discovery to take control of her destiny and survive in an uncertain world.

N. S. Vishwanath (Vish) earned a PhD from the University of Pennsylvania. After a career in technology development, he recalibrated his compass to pursue his long-time interests in writing, music, and history. Today, he divides his time between the New York area and Mysore (a South Indian town with a splendorous history). His website is www.storytellervish.com. Nights of the Moonless Sky is his first novel.