The Tyranny of Political Ignorance 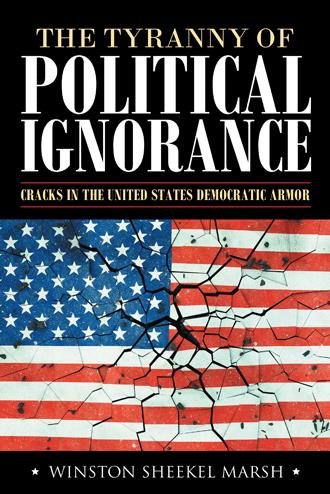 The tyranny of political ignorance, explicit in a political campaign whose leader never misses a moment to speak glowingly of a geopolitical archrival, should have motivated Congress to recapture the Founding Father's fear of foreign interference in the nation’s domestic politics. In this threat, Congress had an opportunity to fix the glaring anomalies in the system and prepare the United States to meet the challenges of comparative advantage, the burgeoning forces of demographic diversity, globalization, and the exploding scientific and technological advancements. Moreover, the United States Congress and the states are entrusted with the task of amending the Constitution. It is imperative that the Constitution be amended immediately to prevent a politically ignorant individual from ever assuming the presidency of the United States again.
The Congress should begin to fix the problem, starting at the top. It is incumbent on the Congress to examine the current constitutional qualifications for the presidency and declare it to be patently inadequate and dangerous for these times. As it stands, any rich, politically ignorant individual, born on United States soil and thirty-five years old or older, can assume the presidency of the United States. This actually happened in the presidential election of 2016 when Donald J. Trump assumed the office.
In fixing this shortcoming, the Congress must simply establish a set of criteria that categorically states what future presidents should know, understand and be able to do politically, both domestically and internationally, in order to enter the White House and learn the art of governing the nation and managing international diplomacy. To address this problem, the Congress must challenge the leading academic institutions to put a curriculum together. The public should have an opportunity to critique this curriculum and make recommendations. A bipartisan committee of the Congress must then review and approve this curriculum. Academia must be allowed to administer an examination that all future Presidents and Congresspersons must successfully complete to hold office in this democracy. It must be remembered that many Congresspersons aspire to become president. Moreover, Congress must use its oversight powers to ensure that this addendum is meticulously observed.
The first United States President, George Washington, presided over a population of four million. Then there were thirteen states. Today there is a population of over three hundred and thirty million. There are now fifty states and the territories. The qualification for the presidency has not been changed over the past two hundred and thirty three years. The United States in 1789, was basically an agriculturally based economy. The country has since transitioned through industrial, technological, scientific and information revolutions. The world is now a very complex place where specialization dominates all fields. The executive branch now employs over four million staff members; more people than there were in the entire United States at its inception. It is imperative that the qualifications for the presidency reflect the changing times and developments.
The job of the President is without question the most complex in the world. It should be observed that lawyers, doctors, engineers, teachers, nurses and all professionals must go through rigorous years of training, complete an internship and a state board examination before they can qualify to serve in those fields. None of these professionals bear a burden comparable in scope and magnitude to that of the presidency. There used to be that saying that “Anybody can be President of the United States of America.” That phase needs to be retired immediately.
In addition to the stated qualifications in the Constitution, a President needs to demonstrate clear and convincing evidence that he/she can manage at the national and international levels. The president’s reading/comprehension skills must be of a very high standard. Furthermore he/she must demonstrate super high levels of listening skills. He/she must be able to process and assimilate information at unprecedented levels. There must also be clear and convincing evidence that the president is willing to be a life-long learner. The President must be flexible and demonstrate the ability to earn the trust of all Americans, regardless of their many differences.
Additionally, as cited in Edwards, Wattenberg, and Lineberry (2016), Neumann points out that democratic theory has never been explicit about the precise requirements of knowledge and cognitive skills that must be exhibited by each citizen for the democratic system to work as intended. In light of the current wave of political apathy and the astonishing decline of political awareness, Congress must at this time, establish what the electorate needs to know, understand and be able to do to fulfill its democratic obligations. The nation's leading academic institutions should be entrusted with the task of determining the content of what the electorate needs to know, understand and be able to do politically. The electorate must be given an opportunity to review and make inputs to this curriculum. After it is approved, the Congress must then inspire a political revivalist movement to keep the United State in the vanguard of the democratic process.
Political ignorance should be addressed at all levels of the educational process. National requirements need to be set, and incentives offered to those who demonstrate depth and breadth of knowledge in the political process. Mandatory political studies as a pathway to most disciplines should be encouraged to help to instill patriotism and an understanding of the American political process. This would also inspire current and future young leaders to enter the political arena as they could be taught that they can make a difference.
Furthermore, the Congress should promote corporate buy-ins to these programs. Scholarships and other incentives to individuals who aspire to lead would make a significant difference in removing young peoples’ political apathy. Corporate ethical and professional standards spread across the entire political spectrum would help to remove some of the current inappropriate behaviors exhibited by untrained political leaders.

The Tyranny of Political Ignorance highlights cracks in the United States’ democratic armor, beginning with the Constitution’s legalization of slavery and continuing through to the Trump presidency.

President Trump, who may be the most politically ignorant individual to hold this high office, has disrupted international agreements and dismantled his predecessor’s accomplishments.

The coronavirus pandemic and the Black Lives Matter protests have further exposed Trump’s shortcomings as a leader. Future generations may observe these two cataclysmic events as blessings as they revealed Trump’s inability to lead and focused a bright light on the nation’s social and economic disparities.

The author hopes that his analysis will draw attention to the nation’s inequalities that have inhibited the United States’ progress toward the goals set forth in the Declaration of Independence and the Fourteenth Amendment of the Constitution.

Join the author as he explores the flaws in the United States democracy and advocates reform that will require the president and all members of Congress to demonstrate nationally approved levels of competence before they can hold office this democracy.

Winston Sheekel Marsh grew up as a British colonist in Jamaica before the island negotiated its independence on August 6, 1962. He was an educator in the Jamaican school system more than twenty-seven years and has always been an avid student of American history. He is a resident and citizen of the United States of America, where he has taught in colleges and high schools. He is married with six children.