Growing up in the West End of Vancouver in the 1940s. 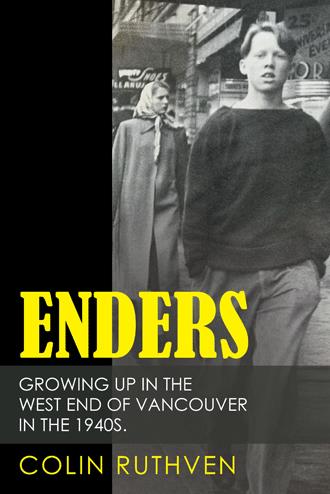 This is audaciously the first and possibly last book written by an artist who believes he has a story.

Now eighty-four, he has been sitting on this story for over sixty years. It has finally hatched, a hefty seventy-four-chapter memoir.

This is, in part, a coming of age story primarily of his first nineteen years growing up in Canada, principally the West End of Vancouver in the years during and following the Second World War. The early chapters describe the family system and early influences, sometimes light, often dark, frequently poignant, that lay the foundation for a plot that develops somewhere in the vicinity of puberty, revealing circumstances that culminate in dramatic events that require that he leave Canada at the age of nineteen.

The final three chapters are a retrospective analysis from a present perspective back through two careers and sixty-four years in the United States and describe how from complicated circumstances that caused him to leave Canada, he has had a very rich and rewarding life in the United States. He eventually became a Marine fighter pilot with two tours in Vietnam, followed by a career as lead illustrator for the Commercial Appeal, the only remaining newspaper in Memphis.

The final chapter weaves several interrelated plots together in a dramatic, surprise ending that hopefully appeals to the reader’s sympathy for personalities introduced throughout the book.

Colin Ruthven grew up in Vancouver’s lively West End in the years during and following World War II.

He shares stories that are humorously light and others that are stirringly dark, including what it was like growing up with a father who spent the war battling his own demons. His Aunt Helen, who served as a dietician in the Royal Canadian Army, would tell him how she nursed concentration camp survivors back to health after liberation.

The author deftly ties in stories highlighting his boyhood comradery with fellow “enders” with more serious moments from adolescence, leading up to his dramatic departure from Canada at age nineteen.

Ruthven, a dual citizen of Canada and the United States of America, would go on to spend several decades in America, serving as a Marine fighter pilot in the Vietnam War and retiring as a lieutenant colonel before enjoying a second career as an award-winning illustrator.

Colin Ruthven was born in Sweetgrass, Montana, but grew up in Canada with dual citizenship. He left Canada in 1954 and served in the United States Marine Corps, becoming a fighter pilot and serving two tours in Vietnam. He retired as a lieutenant colonel after twenty-one years and enjoyed a second career as an illustrator with The Commercial Appeal in Memphis, Tennessee. He lives in Memphis with his wife, Alice, where he writes and paints.