Searching for the Epic Life A Guyanese Memoir

by Rory I. Jagdeo 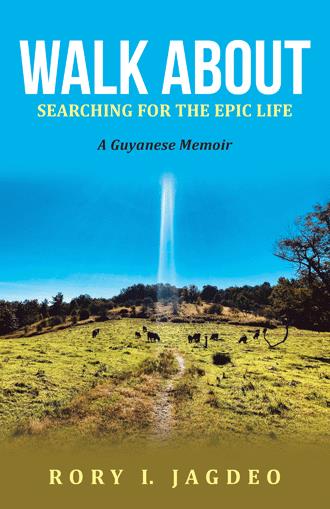 It was a hot tropical Friday evening in September of 1974; the air was thick and very humid and I was having a farewell party in a rum shop (bar) in our village. Cecil was the owner and he was cool enough to let us occupy a booth, even though we were in our late teens. In Guyana, there were no age restrictions implemented as to when we could drink; it was determined more or less by your parents. There were about ten of us, but the names and faces I recall were of Val (who currently lives in Suriname), Kailan (in New Jersey), Zubeer “Z” (recently deceased), and Eugene “Grimes” (who sadly died of a broken heart).

I was leaving for Toronto, Canada that Sunday, September 15, 1974. I was almost 20 years old, standing five foot eight inches tall, one hundred and fifteen pounds, and very dark and skinny. I was about to attend the Radio College of Canada and felt both excitement and sadness as it was the first time I was leaving home and the first time flying on jet plane.

I had just finished a two-year apprenticeship at the New Amsterdam Technical Institute in July 1974 in Electrical Practice and Installation. I even passed my City and Guilds of London Institute—a certificate that is recognized in all of the British Commonwealth. Prior to this, I had completed high school quite young at 16 and had passed 5 subjects in the General Certificate Examination (GCE) ‘O’ Levels from the London Institute. In those days, in order to graduate from high school, you had to write the same exams that the kids from England took. The written tests were taken in Guyana and all of our work was sent to London to be graded. During the August holidays, we would get so stressed out waiting for the results. English was the main subject to pass in order to find employment as a teacher. Unfortunately, I wrote English three times and failed so miserably that I gave up on this.

We ordered a bottle of rum and a few bottles of sodas for mixing. In those days when you go to a rum shop, you can only buy in quarter, half, or a full bottle. We poured our first and last drinks together that night locked in brotherly love. I still remember that very taste and the sad feelings of leaving my friends. Val had brought his guitar and we were all ready to party. Val, Z, and Grimes, could play quite well. I had been mentored by Grimes and I truly had a love for the instrument. We sang “Leaving on a Jet Plane” a thousand times at the top of our voices; people in the bar were loving every minute of it. We also played “House of the Rising Sun” and a few Beatles songs as well.

We shared so many funny stories and, feeling slightly intoxicated, I cried a few times from laughter. There were also a few times when I felt panic seeping into my soul as I questioned why my parents wanted me to go to school so far away in Toronto. When I look back now, I feel that I was very young and naïve at 19 years old. I was not ready for this big step. The expectations of my parents were that I would eventually gain residency through employment or marriage and maybe one day take them over there for a better life than what was offered in Guyana. Well, that never quite happened, but we’ll get to it.

Saturday night came quickly and it was my last night home. We had to leave at 4 a.m. in the morning for the airport. It was quite far to travel to the airport from where I lived. We had to get to the Stelling and wait in line with all the other cars to cross the Berbice River. The name of the boat was Torani. Many Guyanese livelihoods depended on this boat crossing. It was put in service during the British colonial rule. It was usually a joyful time for me when crossing on this ferry because I could look out the huge windows and see the city of New Amsterdam fading away in a distance. My mother was busy packing my suitcase and my father was finalizing the agreement with a private car owner to take us. In those days, you were at the mercy of people who owned a car and they would charge a hefty fee for this service. I saw my mother neatly fold my two pair of pants—a light blue and white one that I wore to play cricket as part of the uniform, a few shirts, underwear, and few socks. I had no sweater or winter coat. I had no idea what was required in Canada during the month of September. She put aside my black pair of pants and a light blue shirt which was even too big for me, a tie, and my brown leather shoes for my travelling outfit. This was all I had since I grew up in Guyana where the temperature is always over 80 degrees year-round and very humid with the blazing hot sun in the tropical sky. It would be a culture shock to feel the first blast of cold air against my face.

Rory I. Jagdeo lost his brother Steve to COVID-19 and was inspired to write this story of leaving Guyana at almost twenty years old, boarding an airplane for the first time to Toronto, Canada.
It was an unlikely journey for a man with such humble beginnings—a man whose great-grandparents were taken from India to work on a sugar plantation as indentured servants in the late 1800s.
In this autobiography, he looks back at his boyhood and adolescence growing up in a village called Fyrish on the Northeastern coast of Guyana, a country on South America’s North Atlantic coast and how life changed when he went to college in Toronto. From there, he highlights his life’s challenges, pleasures, and close calls.
While his life has been challenging, he has never given up. With hard work, he has followed destiny’s path and explored the pleasures of life.
From his life as a musician and recording artist, to his adventures traveling, to his romantic exploits and time as a caregiver, the author celebrates his incredible life.

Rory I. Jagdeo is a singer/songwriter and street musician with a passion for the harmonica. He has recorded three albums and loves performing classic cover songs. He retired after more than twenty-five years in the telecommunications field and spends his free-time writing songs and memoirs, birdwatching, feeding cats, facilitating ecstatic dance, and traveling. He lives in Asheville, North Carolina, with his partner and two cats.