A Very Little Bumblebee in a Great Big World 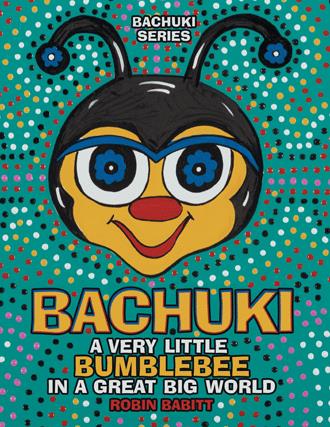 I see all things in color,
And when YOU are in my view,
I see a lot of happy hearts,
I see a rainbow too.

I’m not your average insect,
But for sure, I am your friend,
I’ll be there to protect you,
And on that you can depend.

My mom thinks I am special,
Tells me that I’m really smart,
Believes I am amazing,
And I have a great BIG heart.

She knows that I’m not perfect,
Doesn’t think that I should be,
Perfection’s kind of boring,
I’m imperfect perfectly.

BACHUKI has a heart of gold and a cape big enough to share. His moral compass always returns him home at the end of his bee-z-z-y day to his mother and their nightime routine of reading their favorite book,“BEE MINE”.

In 2012, contemporary artist and author, Robin Babitt dropped her Jersey boots on the shores of Delray Beach, Florida. Nicknamed ROCKIN ROBIN when she arrived, Robin danced through a few twists and turns of her own.

A Breast Cancer Survivor, Robin strives for excellence in everything she does whether she’s writing, painting, cooking or dancing.

In kindergarten Robin saw the alphabet above the chalkboard as a rainbow. In 5th grade, she was asked to read her very first Novel. She had always seen letters and numbers in color, but now she was up against an entire Novel. She saw black letters on the ivory page, but the words had letters and the letters were colors. She lost interest in the book quickly because of the mound of black letters on each page but there was also a mound of beautifully colored letters which drew her interest immediately.

This phenomenon or “gift” is known as Synesthesia. Synesthesia is the stimulation of several senses. ‘Synth’ meaning together and ‘ethesia’ meaning perception. Robin didn’t become aware that there was a name for how she saw things until later in life and then it made sense.

Colors have influenced every decision Robin’s made. At the age of 16, she was a Needlepoint Artist. Robin’s represented artists worldwide, is a Decorator and Realtor. Each career choice has been an intoxicating adventure in color.

Colors influenced her choice of names for her children. COLOR AND BALANCE were key in choosing a name.

Robin knew her normal was different but knew different meant unique and that’s how she saw herself, her life and the world around her. BACHUKI is the extension of her enlightened perception and what she feels children would like to see and read.

And then BACHUKI met VENOM……….

You can call me VENOM,
If’ that’s easier for you,
Referred to as THE VIRUS,
Shake my hand, how do you do?

When I arrived, I must admit,
I hated everything,
Was born a little virus,
Overnight became a KING!

I sure like the attention,
That I get when I’m in town,
Attention whether good or bad,
I wear it like a crown.

BACHUKI introduces the readers to a cast of characters, some that make you sick.
BACHUKI’S lessons are taught as he and his friends face their fears and deal with a very unwelcomed visitor.

Written and illustrated by Robin Babitt,
BACHUKI encourages his audience to embrace self-worth and be proactive with a purpose. Nothing is out of reach and BACHUKI looks forward to the day he changes the world.

The Bon Art-Petit Recipe Book is a compilation of favorite recipes with whimsical characters enticing all to bake bread and break bread. Broccoli Surf-lay, CHKN & DMPLNS, Strollin and Guacamolin and I Wonton More from Life, each recipe and painting are unique unto themselves.

Robin is the mother of two beautiful daughters, Sara Rose and Hannah Paige and the proud grandmother of an adorable new baby boy.

Now put away your bee-z-z-y thoughts,
And dream a dream or two,
Let’s say goodnight, now close our eyes,
“SLEEP SWEET NOW, I LOVE YOU.”

BACHUKI sees the world through the lens of a kaleidoscope. His unique perspective makes the world a beautiful place.

BACHUKI takes you on an adventure of rainbows and honey pies visiting friends on land and in sea. He aspires to do good and reveals his compassion for things that need our attention. Witty and funny, BACHUKI is perfectly imperfect. He shows you how special you are in this great BIG world, always encouraging you to do your best and believing you can and will do something amazing. Whether he is helping Murtle the Turtle find her home, Jelly Jam and The Float Notes drown the noise or visiting Mother Earth to lift her spirit, BACHUKI takes pride in being there for his friends and family and believes he can make a difference everyday. His love for his mother and his hive is his moral compass bringing him home every night after a very bee-z-z-y day. Through the eyes of a little bumblebee a superhero is born, at least in his own mind, waiting for the day that he will conquer the world.

ROBIN BABITT is an artist and author from New Jersey now residing in Florida.  She brings to life her intimate relationship with color, a phenomenon known as Synesthesia, through BACHUKI who sees the world through the lens of a kaleidoscope.  Robin has represented artists worldwide and has been featured in local and international magazines as well as a variety of art exhibits.