A Tale of the First Snowfall 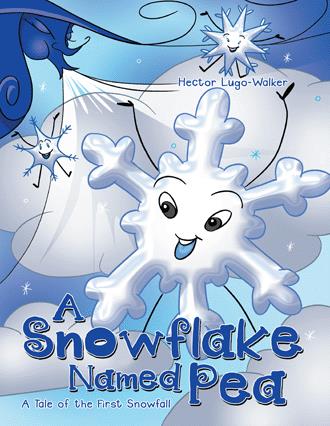 High up in a fluffy white Cloud lived a Snowflake named Pea. Everyday Pea would look down from his happy home in the magical blue sky and wonder what it would be like to just jump off and fall to the ground below him. Whenever he talked about it, the other Snowflakes would poke fun at him for not a single Snowflake had ever fallen to the Earth before. All day long, and during many nights, as well, Pea passed the time gazing down at the ground far below often wondering aloud, “What would it feel like to fall from the sky?” And, as always, the other Snowflakes always rolled their eyes and sighed, “Oh no, not again Pea, what a harebrained idea!” The other Snowflakes were happy living in the Clouds and thought it was silly to dream of ever leaving. “Where would you go, if you fell from the sky?” they smirked.

“Well, to the ground of course,” Pea smiled.

“Why?” they asked mystified.

“Because it’s there,” he replied.

Pea continued to pass the time gazing down at the mysterious and interesting landscape so far below, yearning to make the leap and wondering, “What would it be like to fall from the sky? And all the while, the other Snowflakes just kept rolling their eyes, sucking their teeth and scoffing, “But no Snowflake ever has, you fool!”

As time went by, Pea’s wonder had turned into a deep longing to know what it would be like to fall, to float, to fly through the sky and eventually, touch the ground. He had heard stories that, his distant cousins the Raindrops, who lived on the other side of the Earth, often did what he longed to do. But he had never met a Raindrop so he couldn’t ask one what it was like.

“Why can’t you just be happy staying here?” the other Snowflakes demanded harshly.

“Because I want to know what it would be like to fall from the sky,” he said.

“To what end?” inquired the Snowflakes.

“To have an adventure!” Pea answered pensively.

Our tale is about , a curious and brave snowflake who dreams of leaving his cloud and falling to the ground below. There is only one problem; no snowflake has ever done this before. Not to be discouraged, he does and the other snowflakes soon follow creating the first snowfall.  On their magnificent adventure they discover the ever-changing nature of Nature.

Hector Lugo-Walker is a New York City-based writer. He is a theatre producer, director, actor, and playwright. He's also a member of the Dramatist Guild and Lincoln Center Theatre Directors Lab. A Snowflake Named Pea is the first book in his Children And Nature Trilogy.