The Imperfect Storm: Racism and a Pandemic Collide in America

How it Impacted Public Education and How to Fix It 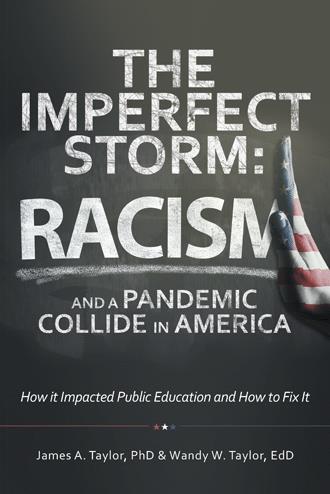 For well over a century, a camouflaged system of racism crept beneath the surface in America. When the COVID-19 pandemic struck, it unveiled that system of racism and pushed it to the surface. On May 25, 2020, George Floyd’s death ignited that system of racism and the explosion engulfed America. That explosion awoke many Americans who were either in denial or not fully aware of the depths of the systemic racism that oppressed people of color for centuries.
After weeks of demonstrations by racially diverse groups of outraged people in all 50 states, officials and decision-makers took notice, and they took action. Mayor Marty Walsh of Boston, for example, declared racism a public health crisis. He reallocated $3 million of the department’s budget to address the public health emergency. Walsh said his decision came after he listened to black people – both in the Black Lives Matter movement and in his life – who shared with him “how racism shapes lives and hurts communities.”
In a Press Release on May 29, 2020, the American Public Health Association declared that “racism is an ongoing public health crisis that needs our attention!” Councilwoman Natasha Harper-Madison of Austin, Texas, echoed those sentiments by saying: “Racism is literally killing black and brown people. It’s a public health crisis and it’s beyond time to treat it as such. The inequities are countless and they aren’t because African Americans are inherently inferior. They are the fruits of generations worth of explicitly discriminatory and racist policies, things like housing policies from the federal level on down to the local level, that kept black residents from even reaching the ground floor of generational wealth-building.”
Major organizations like Google, Facebook, Apple, Target, Amazon and others made both financial and written commitments to fight racial injustice in America. Police reform also became a reality. While both houses of Congress were drafting bills to address police brutality, some local departments acted quickly to ban no-knock warrants and chokeholds.
And many memorials and statues that were prominently displayed to honor the Confederacy were shoved from their pedestals. Americans across all ethnic, age, religious, and socio-economic groups clenched their fists in solidarity with a pledge to eradicate vestiges of the country’s racist past and build a future devoid of racial injustice. Multicultural groups of Americans across the nation re-assembled in solidarity on June 19, 2020. Instead of clenching their fists, they lowered their heads in prayer to celebrate Juneteenth (June 19th) – a holiday to commemorate the end of slavery in the United States.
It is especially worth noting that K-12 public school officials in one of the nation’s largest school systems – Fairfax County (VA) Public Schools – seized the moment to make a profound statement to their students, parents, and stakeholders. On July 23, 2020, the school board voted unanimously to rename Robert E. Lee High after the late U.S. Congressman John R. Lewis. “The name Robert E. Lee is forever connected to the Confederacy, and Confederate values are ones that do not align with our community,” said school board member Tamara Kaufax in a statement. During that same meeting, the school board voted and renamed Columbus Day as “Indigenous Peoples’ Day” for school calendars. Kudos to this school board for providing a powerful history lesson to their students from the “curriculum of life.”
Floyd’s death also ignited protests across the globe that caused many nations to look at racism and police brutality in their cities. This prompted reforms that promoted inclusivity and a repudiation of police brutality across the globe. From New York to London to Berlin, multicultural crowds of mostly young people raised their clenched fists in solidarity and shouted – Black Lives Matter!
As with most catastrophes, the most vulnerable are hit the hardest, especially in the area of K-12 public education. When schools were shut down and transitioned to online learning, many children from disadvantaged families could not participate in that process due to a lack of access to computers and internet service. Many children also lost access to at least one free meal a day that was provided under the school lunch program.
The exposure of systemic racism in America sends a loud message – destroy it before it destroys you. Some changes have begun to occur. The most important change, thus far, has been the heightened sense of awareness that institutional racism does, indeed, thrive in America. Not only are more people aware that it exists – they acknowledge its destructive impact on our society.
The essential question at the beginning of this chapter was: What indelible lessons have we learned from the collision between the two deadly diseases – Racism and COVID-19 – and what should be America’s path moving forward? In response to that question, America must move forward by developing a plan to dismantled systemic racism, and that plan must begin with reforms in K-12 public education. While the current generation is building an ark of systemic reform, we must continue to educate our children. Because leaders in the future generations must keep the ark floating.

“If a man like Malcolm X could change and repudiate racism;
if I myself and other former Muslims can change; if young whites can change – then there is hope for America.”
-- Eldridge Cleaver

On May 25, 2020, a thunderous collision between racism and COVID-19 created an “imperfect” storm that revealed centuries of imperfections that were camouflaged in America’s society.

After the murder of George Floyd, virtually everyone became clear-eyed and could see the imperfections in health care, housing, employment, criminal justice, and education. These institutions continue to hinder the upward mobility of people of color.

James and Wandy Taylor, the owners of Taylor & Taylor Education Consultants, explore how systemic racism in public education has prevented many black and brown children from achieving their full potential. They explore how to:

• bridge the culture gap between teachers and students in culturally diverse classrooms;
• prepare teachers to succeed in multicultural settings;
• ascertain the differences between divergent views of education.

The authors also take readers on a journey through America’s past that begins with the Jim Crow era of the late nineteenth century when America had separate and unequal societies and culminates in the present where students learn together—but from teachers that are often biased.

Discover the problems students of color face on a daily basis and arm yourself with strategies to eradicate systemic racism in our schools with the insights provided in The Imperfect Storm.

James A. Taylor, Ph.D., has worked in public education for more than forty years, having served as a teacher, high school principal, executive director, and associate superintendent. He earned a doctoral degree from the University of South Carolina in 1978 and completed additional post-graduate work at Auburn University and the University of North Carolina. He is also the author of From Unequal to Unwanted: Reforms Needed to Improve K-12 Public and Higher Education. He is a consultant with Taylor & Taylor Education Consultants, LLC., a company he co-owns with his wife, Wandy W. Taylor.

Wandy W. Taylor, Ed.D., holds a doctorate in educational leadership and management from Capella University, an Ed.S. in educational administration from the University of West Georgia, an M.Ed. from South Carolina State University, and a BA from the University of South Carolina. She has worked in public education for twenty-three years, having served as a counselor, assistant principal, principal and director. She is a consultant with the Georgia Leadership Institute for School Improvement and CEO of Taylor & Taylor Education Consultants, LLC, a company she co-owns with her husband, James A. Taylor.