by Richard A. Pundt 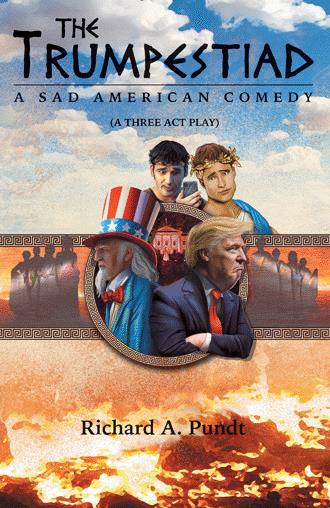 This work of fiction is a three act play that is focused upon the current and bizarre events taking place at the U.S. White House. Out of the blue, the Greek God Apollo receives an inadvertent tweet from Donald Trump beseeching Apollo to come to a rally. Apollo comes and, in the process, encounters a personification of “Dearth” who also received a tweet to attend the rally. Apollo and Dearth over-hear an argument between Donald Trump and Uncle Sam regarding the Pillars of Truth (Ethics, Integrity, Honesty, Loyalty, Courtesy, Reverence, Honor, and Justice) who Mr. Trump has sent to Hell.

In the second act, Apollo, Dearth, and Uncle Sam go to Hell to retrieve the Pillars of Truth. There they encounter Apollo’s Uncle, Hades, who cannot find a place for the Pillars because they are too pure and radiant. After listening to a discussion between Hades and each of the Pillars, Apollo devises a plan involving Uncle Sam and Dearth to bring the Pillars of Truth back to the United States.

Unexpectedly, the ancient Greek God, Apollo, receives an inadvertent tweet from Donald Trump asking him to attend a White House rally. While there, Apollo encounters a personification of Dearth who received a similar tweet. The two overhear an argument between Donald Trump and Uncle Sam regarding the eight Pillars of Truth (Ethics, Integrity, Honesty, Loyalty, Courtesy, Reverence, Honor, and Justice) who President Trump has sent to hell.

When Apollo, Dearth, and Uncle Sam decide to travel to hell to retrieve the Pillars of Truth, they meet Hades who is unable to find a place for the radiant Pillars. After listening to a discussion between Hades and each of the Pillars, Apollo devises a plan to bring the Pillars back to the United States. When Apollo, Uncle Sam, Dearth, and the Pillars of Truth return to the White House, the Greek God’s plan unfurls as he involves twelve of Trump’s followers, as a jury, and eventually has Dearth escort Trump, Fruity Rudy, Moscow Mitch, Bad Bar, and the Fox to see Hades. But what will happen when the audience becomes part of the plan?

The Trumpestiad is a timely political satire that humorously brings into focus many of the bizarre events that have taken place in the United States for the past three years.

Richard A. Pundt is an attorney whose diverse career has included roles as a former special agent with the FBI, prosecuting attorney, special prosecutor, corporate counsel, trial attorney, and CEO of a tech company. He is the author of two legal books and a novel. Richard resides in Cedar Rapids, Iowa.