The Story of Mr. Thomas Carney

A Maryland Patriot of the American Revolutionary War 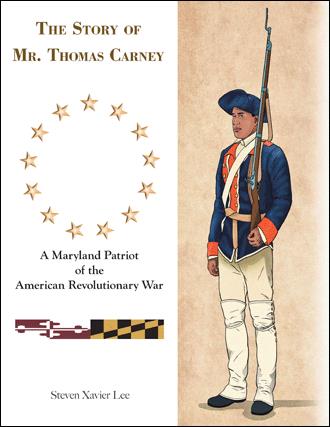 Chapter Two: A Trip to Chestertown Now sometimes Pa would have us load our finest wagon with the goods of our farm: produce, crafts, and treats (that Ma would make fresh the night before), the wagon was like a little store. Then he and I, and sometimes my little brother too, would set out to sell at marketplaces around the Eastern Shore. One fine spring morning in May of 1774, Pa said “We’re a’goin’ to Chester.”, and I was glad. Chester’s a grand old town with lots to do, interesting things to eat & drink, and all the latest news. Pa had a cousin there too we’d sometimes see, a waterman who lived on Water Street at Scott’s Point, a Chestertown black community. Arriving in Chester it was High Street we headed down, making our way to the harbor where market stalls, business and trade all abound. However on this day the fine streets were packed with people, activity and uproar, our wagon could make but a crawl; Pa wondered “Have we come to town in the midst of a festival or a really big brawl?” . When we finally reached the harbor, as I looked from the shore, there were ships out in the water, with men throwing things overboard: boxes and barrels, crates, papers and more. The Chester River had become a sea of bobbing articles and debris. A sailor in uniform was tossed into the water from a ship’s bow. Frantically he swam ashore, stood up and gestured at the men aboard while shouting a defiant vow. Cannons of the ships were fired up into the air, and musket fire from land joined in the fanfare. Even the seagulls, ducks, geese, and other birds of the shore, excitedly rose in frenzied synchronized flights, bringing the clear blue sky to life. In front of the Custom House ringing his bell, a town crier in a hat and waistcoat, yelled: “Hear ye! Hear ye! Down with the British, their taxes and tea! We are Maryland, a land of liberty. Hear ye; hear ye! ”. The crowd’s roar swelled, and despite many a British jeer, the townspeople seemed to dance in revelry and good cheer. It was Chestertown’s protest Tea Party we had happened upon they say, when we came to sell our goods there that day. Maryland, with the other American Colonies, was joining against the British way of rule and taxation. The Colonies wanted to be their own new nation. With such a crowd and commotion our wagonload of goods were all sold well before sundown. So it was happily that Pa had us pack up to leave town. On the road that evening in the trot back to our country abode, I said “Gee, what an exciting day!”. But Pa responded “Hey, have not too much cheer there in your reverie. The British will not take kindly to Chester, Boston and other towns of their Colonies, destroying British tea and property. These protests will stir a great war upon us from across the sea, and that, my son, is cause for great solemnity.”

The Story of Mr. Thomas Carney shares the chronicle of an African American Revolutionary War hero, forged deep in Maryland’s early history. It is 1804 when a Revolutionary War veteran is asked by a teacher in Baltimore, to tell his story to her class. As he addresses the assembly in the one-room schoolhouse, Thomas Carney provides a fascinating glimpse into the War for Independence, from the perspective of a free African American family. Within his tales, Carney reveals his experiences while growing up in the Colony of Maryland on the Eastern Shore, listening to his grandfather’s stories of their legacies, witnessing Chestertown’s protest tea party, and eventually embarking upon a bold adventure as a twenty two-year-old enlistee, who served in two different armies over the course of the War. As he discloses how he and his fellow soldiers pressed on for a new future, Carney shines a light on the sacrifices that fostered the birth of the United States of America..

Steven Xavier Lee earned a BFA from the School of Fine Arts at Howard University in Washington, D.C., and a MS from the Graduate School of Design & Technology at the Pratt Institute in New York. He has served as an educator, environmentalist, designer, and museologist, including as the founding director of the Benjamin Banneker Historical Park & Museum in Oella, Maryland. His documentation of Maryland crosses many platforms, including in state and national initiatives, such as the ‘Living Voices/Voces Vivas’ audio program of the National Museum of the American Indian, and the ‘Local Legacies’ project of the Library of Congress. His writing can be found in an array of exhibitions, performance, articles on history, culture and the environment in diverse publications. Born in Baltimore, Steven X. Lee is a resident of the historic Gwynns Falls stream valley forest.