Where From and Where To

One of the Last Self-Told German Jewish Life Stories 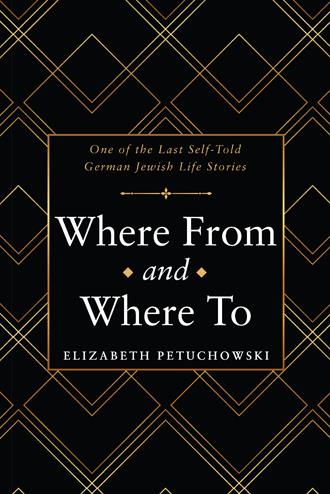 At the municipal high school for girls which I attended between 1934 and 1938 I admired the teachers who dodged giving the Hitler salute upon entering our classroom. To an American readership, I need to explain something that was taken for granted in a German school – certainly at that time.

Unlike the practice in American high schools where going up the down stairs is a no-no, pupils in German high schools stayed in their classrooms, except for art, lab, gym and music. Instead, teachers made the rounds of the classrooms where, upon entering, they were required to give the Hitler salute. Some of my teachers managed to avoid this. Dr. Meschede, for instance, our French teacher, saw to it that her arms were always laden with papers she had corrected. Her right arm was not available for the salute. She stepped vigorously through the door and plunged in medias res with “Bonjour, mesdemoiselles.” Our mathematics teacher, Dr. Aldekamp, sauntered in, ostensibly absorbed by the problem he gave us to solve that day.

This required salute had become routine after Germany had been taken over by a dictator who used threats and force to compel the masses to his view. That Hitler salute in the high school was, in the scheme of things, negligible. It came with coerced collective thinking in the press, in the arts: a dangerous development.

In this way I learned not only subjects of the curriculum, but I also got a whiff of that aura where collective thinking led to unthinking. Outside the school, propaganda was overt: the party newspapers mentioned above, the ubiquitous pictures of der Führer. Did anyone tear down or daub Nazi posters? Attempting to do that would have been fatal. In the school, compliance with propaganda was more subtle.

Collective thinking has ever since then aroused my deepest suspicions. The corollary was that I tended to regard a solo status as preferable to herd status. There is no need to go along with a majority if one thinks the majority is wrong. “Fifty million Frenchmen can’t be wrong”? There is nothing wrong with holding a minority opinion.

One teacher at the school shared some of her own concerns with us — did she realize this was a bold and dangerous thing to do?

Haile Selassie had been crowned emperor in Addis Abbeba, Ethiopia, on November 2 1930. In October 1935, the Italians, under their Fascist premier, Benito Mussolini, invaded Ethiopia from Eritrea and Somalia in order to extend Italy’s empirical power. The Italians took Addis Abbeba in May 1936, and Haile Selassi went into exile. Mussolini declared in Rome: “At last, Italy has her empire.” Germany supported Italy in this Ethiopian venture – an event I recall well.

Fräulein Dr. Knocke, geography teacher who had succeeded Fräulein Dr. Crämer (more below) as our home room teacher in Untertertia (eighth grade), pointed to a map of Africa and allowed how she was profoundly troubled by this development – thereby suggesting that not everything the Führer undertook had her approval. Her trepidation about Germany getting into a war proved to be justified. Indeed, on October 25 1936, Hitler and Germany made a pact. The term “Axis” was said to have been coined at this time by Mussolini; later, Japan extended the reach of this axis.

The same teacher also shared with us her worries about an impending war when the British Prime Minister, (Arthur) Neville Chamberlain (1869-1949), on September 30 1938, came to an agreement with Hitler in the latter’s flat in Munich. Upon his return to England, Chamberlain waved the agreement document with the now oft-cited words: “Peace with honour. I believe it is peace in our time,” whereas Churchill regarded this agreement as “a defeat without a war,” and that this was “only the beginning of the reckoning. This is only the first sip, the first foretaste of a bitter cup.” Fräulein Dr. Knocke had the same taste in her mouth.

Fräulein Dr. Else Crämer, our home room teacher for the first three years of high school, had a positive impact on me. Teaching German, she implemented a rigorous program. (…)

Wearing a small round Nazi party pin on her blouse, she was not anti-Semitic. I had the impression that she was quite fond of me because I soaked up what she taught. She regarded me, a native nerd, as one of her star pupils in German language and literature. And yet, as a member of the women’s division of the Nazi party, she attended party rallies in Nuremberg and returned to class with sparkling eyes and glowing reports.

As positive as was Fräulein Dr. Crämer’s instruction, so negative was the effect on me of the history teacher. This teacher wore his political proclivities on his sleeve in the form of an armband with a swastika when he was not wearing full Nazi uniform. A practicing Nazi who per protocol did not like Jews did not call on me. Although I took that as a given, I did not like it. This educator expressed Nazism more explicitly than the obligatory Hitler salute, or Fräulein Crämer’s party badge. His lessons helped to develop my nose for propaganda because everything he said was dominated by his Nazi ideology. I now can smell propaganda a mile away, and am aware of the attendant danger of its mind-numbing effect. Moreover, it was the history teacher who led me to wonder about the science or art of writing history and its use or misuse for nefarious purposes. Perhaps, who knows, but that this poor shnook of a Nazi teacher, compelled to throw in his lot with National Socialism if he wanted to make a living as a teacher, may himself have suffered indoctrination by certain nineteenth century German nationalist historians whose historical writings are inseparable from patriotic aspirations. Such aspirations he now sought to disseminate with a Nazi update for his generation. I learned from him, but not what he meant to teach.

In Where From and Where To, author Elizabeth Petuchowski narrates her story and answers these questions set against a background of contemporaneous events. She talks about her post-war work in London’s Fleet Street for a publisher of trade journals, her marriage to a Berlin-born rabbinic student with whom she came to America, how she coped with culture shock and got used to living in America.

Petuchowski recalls colorful characters; gatherings with students and with many others, well-known and not well-known; her own studies in Cincinnati, Ohio; and seeing England and Germany again years later. Where From and Where To shares a story of a most varied and fortunate life during times of momentous world happenings.

Elizabeth Petuchowski, born in Germany, came to America via World War II England. She taught German language and literature in an adjunct capacity while a wife and mother. She published widely both in her field and feuilletons. Petuchowski authored two German books and translated extensively from German into English.