And the Name Wore Sandals 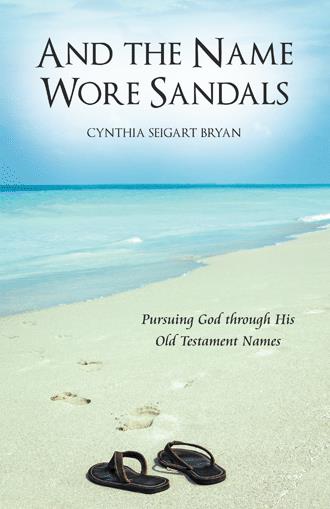 In the Hebrew language, a name communicated something about the nature, character, and reputation of its owner. In the Greek language, the root word for name means, "to know". God's Old Testament names reveal His nature, and we will discover that the more fully we know Him, the more completely we can trust Him.
Before the beginning, before God spoke His mighty words, "Let there be light." God was not abiding in darkness. God was there and His Glory was eternity's Light: "In Him was life and the life was the light of men (John 1:4 NKJV)." In His creative activity, God communicated His light, and all of His other infinite attributes, into His creation. Just like an image in a mirror, creation's only purpose was to reflect (not produce) God's personal Being.
“In the beginning God (Elohim) created" is the first grand declaration of the Bible. It is not as the omnipotent El that the Creator first reveals Himself but as the Triune Elohim. This name is an intensive masculine plural of eloah from the root words El - the All Powerful One, and the ancient word alah meaning to legally swear or bind oneself to an oath. The two root words, when joined together, embody "the Strong One, Who Swears." When Elohim swears, the One Who cannot lie, eternally obligates Himself to His promises.
The name occurs 35 times in connection with Elohim's creative activity in the opening chapters of Genesis. This name implies that the creation itself was secured by covenants; impregnable promises that were already in place at the dawning of the universe. These covenants were bound up with the creation and established in the realm of Elohim's eternal power and limitless provision. They were ordained before the beginning to be interposed into the creation itself in the "fullness of time." What a great hope and comfort for believers that this exclusive Godhead identifies Himself as Elohim over 2,300 times in the Old Testament. This infinitely unrestrained and transcendent Sovereign voluntarily and unconditionally binds Himself to His creation for the fulfillment of His beneficent purposes.
Elohim's attribute of immutability, His eternally unchanging nature, ensures that His covenants are infallibly reliable. What God means, He says and what God says, He shall do. "God is not a man, that he should lie; neither the son of man, that he should repent. Hath he said, and shall he not do it? Or hath he spoken, and will he not make it good?" (Numbers 23:19 KJV) His flawless integrity, untiring resolve, and unfailing faithfulness remain an eternally unwavering foundation.
"Hear, O Israel: [Jehovah] our [Elohim] is one [Jehovah]" (Deuteronomy 6:4 KJV). The name, Jehovah implies, "The Eternally Existing One in Self Revelation" While the other names of God in the Old Testament are related to His attributes, Jehovah is His personal name. This resplendent name is so reverenced by the Jews, they dared not utter it, nor write it fully, for fear of defiling it. Thus, the correct pronunciation has been lost. Jehovah or Yahweh is derived from the Hebrew letters yud-hey-vav-hey (יהוה), also known to scholars as the tetragrammaton.
The first occurrence of the name, Jehovah, is in combination with the name Elohim. In the beginning, Elohim, alone, is recorded, as actively creating the heavens and the earth; a Creator, Who, from the very beginning, was not silent but powerfully expressive. For the phrase, "And Elohim said...", occurs 9 times in the first chapter of the Book of Genesis. He spoke, and the world was, and it echoed back His glory. However, in the reiterated account in Genesis 2, which focuses on the creation of man, Jehovah is conjoined to the name Elohim. "And the LORD God (Jehovah Elohim) formed man of the dust of the ground and breathed into his nostrils the breath of life; and man became a living soul" (Genesis 2:7 KJV).
This God, Who existed in a personal relationship of eternal and uninterrupted bliss within Himself, chose to share this with His ultimate creation. For while He spoke the rest of creation into existence, we see Jehovah, in theophany, bowing low to tenderly scoop dust from the earth and gently form man with His fingers. Once formed, Jehovah's lips drew nearer still, to breathe His own beatific life into the worthless dust, and man became a significant and living soul, made in God's image with volition, emotion, and intelligence.- the very things needed to have a meaningful relationship with their Creator.

And the Name Wore Sandals is not written for those complacent souls who have been satisfied to remain within the outer court of redemption, justification, and even sanctification. Nor is it written to those who rest satisfied in the holy place of prayer, Christian fellowship, and Biblical study. Authored by Cynthia Seigart Bryan, it is targeted to those thirsting souls who will settle for nothing less than entering into the most holy place to behold the transforming glory of a resplendent God, seated upon his throne. The veil has been rent from top to bottom and we are beckoned to enter.

A blend of science, philosophy, and scripture, And the Name Wore Sandals encourages Christians to approach the cloud of the unknowable and discover the God behind his ageless divine Hebraic names disclosed within the pages of the Old Testament. Not just one singular name, for all that is involved in this matchless infinite being cannot be fully contained in one name.

This analysis shows how each name, like a wondrous prism, refracts his holy and effulgent glory into a kaleidoscope of personal meaning to be gazed upon and embraced.

Cynthia Seigart Bryan has been involved in children’s ministry for over forty years, writing most of her own curriculum. Inspired by the burning hearts of men like A.W. Tozer, Charles Finney, and Andrew Murray, she has embraced the promise found in Jeremiah 39:13-14. “And you will seek me and find me when you search for me with all your heart. I will be found by you, says the Lord.”