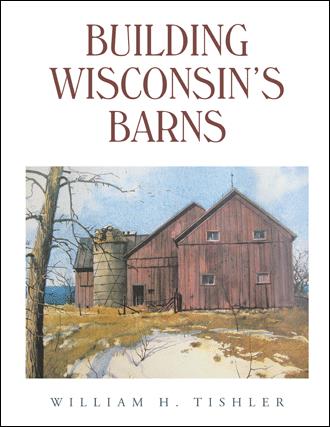 The definition of the word “barn” originally meant “a place for barley.” It was derived from a combination of the words bere (barley) and aern (place). Early in their history, they were used for storing contributions to the church Barns are the noble structures that have highlighted our rural landscape for centuries and they were the most monumental buildings on a farm. This book describes how they were built and the traditions, carpentry skills, teamwork, and back-breaking labor that have made them an integral and beloved component of our countryside. Perhaps no other visible human achievement reflects the traditional relationship people have had with the land over time, as do the iconic wooden barns built by our ancestors. For Wisconsinites, barns are a source of such steadfast pride that we have even portrayed an image of them on our automobile license plates. Today, we admire with nostalgia and remorse this vanishing heritage from our past. Building a barn was based on techniques that evolved from ancient forms of construction that are rapidly becoming all but forgotten. American barns had a relationship to the ancient barns of Britain and Mainland Europe. To build them, pioneer workers relied on their ingenuity, without using pattern books, construction manuals, blueprints, slide rules and computers. Instead, erecting these noble edifices was usually done by many workers under the supervision of a skilled foreman who learned his trade by working many years as an apprentice to acquire construction knowledge that had been passed down from generation to generation. The process of building a barn began with selecting its location—usually a high point of ground with a close relationship to other existing or proposed structures including the house. Once a suitable site was chosen, a modest log dwelling was typically erected along with a crude unchinked log barn for their livestock. This first group of structures could be constructed with only a few tools, sometimes just an axe. Meanwhile, a subsistence crop of potatoes and other vegetables was planted, often between a jumble of existing tree stumps, to provide food for the coming winter. When modest savings were acquired from income earned by working for others or selling any cash crops they had available. Eventually their thoughts would often turn to a larger frame barn. If suitable trees were available nearby, they were felled and hauled to the barn construction site. There, they were shaped with an adz or broadaxe into square timbers for the new barn’s structural framework. Mortise and tenon joints were cut into the timbers and then they were assembled with wood pins, or trunnels, to form bents--the basic components of the barn’s framework. Three-bay barns, the most common in Wisconsin, required four transverse bents. Erecting them involved careful teamwork and coordination from the workers. First, they lifted the heavy bents to waist height. Then pike poles with sharp metal tips were poked into them to raise the bents higher. On the opposite side, men with ropes helped the lifting until the bent was raised to an upright position. Its tenon bottom ends were then slid into mortised openings in the base timber on top of the foundation. The vertical bents were then connected and secured with horizontal beams. Next the structural members for the upper level were installed. When this framework of timbers was completed, it resembled a huge skeleton. After the siding and roof were put on, the barn could accommodate many activities. In addition to housing animals, it could be used for threshing, storing crops, sheltering machinery, and milking. A barn, even in a state of ruin, can continue to benefit & enrich its surroundings after many decades, even centuries. Finding and exploring an early example of one can be exciting. Even determining its age can be a thrill. There are many clues that can help date a barn: saw mark configurations, nail types, surviving early hinges and equipment remnants, structural framework characteristics, and even its type of rafters, can all provide important clues. Over time, advancements in farming technology, shifting human values, and changing economic conditions, resulted in modifications to existing barns and new barn design and gradual elimination of early barns. Those that remain are reminders of the closeness to the soil and awareness of nature our ancestors had when using them. Now, they are disappearing at an alarming rate. The author hopes this book will foster a greater appreciation of them that will help some remain to enhance our rural landscape for future generations. The author’s knowledge about barns is based on the extensive amount of research he has done on them. Much of this resulted from information gathered by him and his students during the summer classes he taught that included countless hours of fieldwork to find and document barns throughout much of Wisconsin. During that time, he met farmers and a few elderly barn builders who graciously shared their wealth of knowledge about these amazing buildings. He is delighted to have the opportunity to share this wealth of information with readers of this book.

Barns are noble structures that highlight our rural landscape. They remain an enormous source of pride for the people of Wisconsin. Many realize that no other visible human achievement reflects the long relationship they have had with the land. However, little information is available regarding their history and how they were constructed. William H. Tishler, an emeritus professor of landscape architecture at the University of Wisconsin-Madison, explains the process of building these iconic structures in this book with breathtaking photos and drawings. The author highlights the traditions, carpentry skills, and backbreaking labor that have made barns a beloved component of the countryside. He also recaptures the techniques of an ancient form of construction that is rapidly becoming all but forgotten. Based on the author’s decades of teaching and field work and his conversations with elderly barn builders who shared their wealth of knowledge, this book will be treasured by those who enjoy the beauty of rural farms and landscapes, or who want to know more about this important aspect of Wisconsin’s history. It can also serve as a guide to their significance and be useful in helping preserve some of these rural icons for future generations to admire and appreciate.

William H. Tishler is an Emeritus Professor of Landscape Architecture at the University of Wisconsin-Madison and an award winning author who spent much of his career exploring rural Wisconsin and its buildings. He also served as chair of the Wisconsin Historic Preservation Review Board and developed the master plan for Old World Wisconsin, the state’s outdoor museum of rural life.