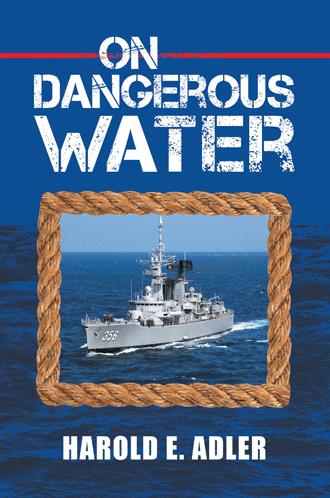 Pilar had to do some quick thinking. There were two torpedoes streaming without regret toward the front of the Barbey and now in 10 seconds another torpedo was ready to destroy them from their left side. They watched as the second torpedo scooted by the ship. The third torpedo was not in sight. She reacted quickly, “Jacobs, turn left 90- degrees. The Barbey leaned to the right to avoid the port torpedo. They watched as the port torpedo zoomed past the Barbey by 20- feet. Pilar and Chester watched as the ASROC plunge into the ocean 100-yards to their side and begin searching for its target.

Reinhart searched the blue ocean in front of the Barbey trying to locate the white exit stream of the third torpedo. At this moment, he knew the skipper of the sub was quite astute. Reinhart recognized the sub skipper meant business. Reinhart knew the sub skipper would release the third torpedo at a slower speed than the other faster moving torpedoes, because this is what Reinhart did during WWII.

“Hey,” Tom yelled. “Look!” He pointed to the right side of the ship. The slow moving third torpedo appeared. They could see an underwater white stream headed their way surrounded by the blue color of the Pacific Ocean. It was moving at half the speed than the other faster moving torpedoes.

Pilar grabbed the wheel from Jacobs and turned the Barbey 90 degrees to the right to hopefully miss that torpedo.

Tom yelled as he saw the third torpedo stream to hit their starboard side of the Barbey, “It’s going to hit us!”

Pilar grabbed the 1 MC mic and stated, “The Barbey is about to be hit with a torpedo on the Starboard side. Hold tight!”

Reinhart saw the white underwater stream from the oncoming torpedo. “Hold on everybody. It is going to hit us.” He grabbed hold of the side of the chart table.

Pilar took hold of the other side of the chart table.

Chester and Ben stood next to the ASROC launching panel and grabbed hold of it.

Jacobs, the helmsman, braced himself next to the Barbey’s steering wheel.

Boom. The USS Barbey rocked back and forth a few times feeling the hit of the 3,000-pound torpedo into its side. They heard the hard metal knock as the torpedo hit the starboard side of the Barbey’s steel hull. They waited for the explosion. There was no explosion. Why? Maybe, there was a delayed explosion.

Chester looked at Reinhart. “What happened, Reinhart? It didn’t explode.”

“The torpedo has enough force to break the shear pin and then the firing pin which is on the front of the torpedo to strike the percussion cap which would detonate the warhead. It is possible that the 3,000- pound torpedo striking us at a speed of 45 knots produced too much pressure on the firing pin that prevented the firing pin from hitting the detonator’s primer cap hard enough to cause an explosion. Hmmm.” Reinhart rubbed his jaw with his right hand thinking. “It could still explode that is what I’m worried about at this time. On the other hand, it is possible that the firing pin could not move until the torpedo traveled in the water at a preset distance. Whoever set the distance made a mistake.” Reinhart glanced at Pilar, “We are not out of the woods, yet. Decrease your knots and swing around toward the sub running away from us. They might surface.”

“We are probably taking on water. I’m going below to check on the damage.” Chester said as he left the bridge. “XO, you have the conn. Reinhart, you are coming with me?”

The U.S. Navy needs help locating a renegade submarine in the Pacific Ocean. A World War II German U-boat commander is asked to lend his expertise in hunting down this submarine. He coaches the officers about the sub’s possible maneuvers to attack their frigate.

Navy frigate USS Barbey is selected to search for the sub. However, with just a skeleton crew, the frigate is plagued with mishaps, including torpedoes fired by the submarine they seek. A Chinese destroyer gets involved demanding the release of the submarine. Naval tensions rise between the destroyer and the frigate. A nearby New Zealand frigate fires a salvo and the Chinese leave the area.

The skipper of the USS Barbey is promoted to Captain and sent on another mission advising an Indonesian frigate demanding the Chinese leave one of their islands. A naval battle ensues.

Filled with intrigue and excitement, On Dangerous Water is a story of adventure as battling naval ships fight for their right to own the untamable high seas.

While serving in the U.S. Navy, Harold Adler worked with classified documents, which gave him an up-close look into the politics and policies of foreign naval affairs. After earning his master’s in economics from the University of North Texas, he now gives readers a firsthand look at what could happen on the open sea.