The Birth of Revenue Management 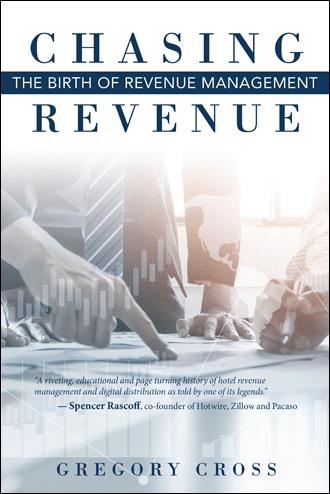 When I first met Chuck Floyd, global president of operations for Hyatt Hotels Corporation, he asked me what I brought to the table. The year was 2010, and Hyatt was looking for their first senior vice president of revenue management. I was already fifty-five years old, with an entire career in revenue management behind me. Floyd admitted that Hyatt typically did not go outside the company for talent but noted that in the discipline of revenue management, everything they had tried internally had not worked. In 2010 when Floyd and I were having that conversation, I had a solid reputation for having delivered a best-in-class revenue management discipline for Hilton Hotels Corporation, and I was being asked if I could do it again.

What made me sit down a decade later and write down this history was the global COVID-19 pandemic. Emails were coming in from every continent, announcing that people had at first been furloughed, then later terminated. I am worried about my discipline of revenue management. Worried that it may not survive the collapse of the hotel industry when the recovery has moved the industry to a new twenty-first-century reality. I am also worried that the history of how revenue management began and then stood upright on early, wobbly legs might be swept away and forgotten. In many ways, the advent of revenue management in the late 1980s was hospitality’s first reckoning with the introduction of the personal computer into the workplace. It is an important part of business history that should not be forgotten. Not only because it changed the industry so that big data, as it is now called, could be taken seriously, but also because it is important to remember just how difficult a transformation that timeframe really was. Is revenue management about to be pushed into the shadows again?

Chasing Marriott - The Birth of Revenue Management is based on my thirty-eight years of experience in the hotel industry. To the best of my ability, I have written down my personal memories and experiences of the events that shaped the evolution of the discipline we call revenue management. Throughout my career, I was forced to brawl with hotel owners, brand executives, consultative firms, technology companies, and many other detractors who chose to marginalize the young discipline. Particularly in the early years, one had to endure a social process of referring to these new ideas as an underclass. Meanwhile, somebody always had something to sell—some new miracle cure that would piggyback on the new abundance of data that no one could manage. The early work was not just about setting a course. It was also about staying alive long enough to prove that the application of revenue management was the reintroduction of common sense to a very complex sales process. Along the way, I met, worked with, and rubbed elbows with the best in the business. Particularly Robert Cross, Ravi Mehrotra, and Sherri Kimes. I interviewed all of them for this book to ensure their perspectives were captured.

For two very different reasons, I have tried to bring a sense of humor to this story. First, the self-depreciating style employed lets the reader know that I was no expert when I started and instead had to find my way in the dark. That fact is important because this is not so much a success story as it is a series of failure stories. And second, I have always found business books to be inherently boring. Business books are generally written by CEOs. They are worthy of a memoir. This book was written by someone who most people have never heard of. As I tell the story of the dawning of revenue management, I also provide a few lessons on how to survive in the tiers of middle management. If you had the words revenue management in your job title twenty-five years ago, you had one foot in the career grave because you had been assigned to an ornamental function that might never become a full partner with sales and marketing. This is not a revenue-management textbook. If that is what you are looking for, you will have to look elsewhere.

Today, revenue management is a discipline practiced across many industries and businesses. Even if you are in no way connected to the hotel industry, this story is transferable. One of the interesting things about the hotel business is that each hotel is a microcosm of the world outside its doors. You eat, sleep, shower, conduct business, attend meetings, drink cocktails, swim, exercise, and perform dozens of other everyday functions in a hotel. Consequently, the hotel industry is required to stay in touch with what you want to do. Some businesses manufacture products—great hotels manufacture memories. Commercial transactions and sales strategies that create a negative experience can ruin that goal even before the customer arrives at the hotel. So it is essential to remember that revenue management is not about raising rates. At its core, revenue management is about satisfying customers and contributing to a well-balanced customer experience.

I spent most of my adult life on airplanes, flying from hotel to hotel. I discovered early on that this precious time can be well spent learning something unusual that you wouldn’t take the time to learn on the ground. For example, generally, when I pick up the New York Times on a flight between one city and another, I first glance at the front page but then head directly to the obituaries. Obituaries that are well-written give the reader concise insights into the lives and struggles of other people who we have never heard of. Perhaps they have influenced us even though they never set out to do so. Those few paragraphs are a final resting place for their ideas before they too become dust. So sit back. Pour a glass of wine, if you like. And enjoy my obituary.

Revenue management is like any other management practice. It involves making pricing and inventory decisions based on assembled data coming from a variety of sources. The name revenue management was coined by Robert G. Cross, the founder of Aeronomics, Talus, and Revenue Analytics (no relation to the author).

It would be left to Gregory Cross and a few others to take the concepts of revenue management, which were originally focused on the airline industry and use them to revolutionize the hotel industry. Along the way he would discover it was more than just technology and algorithms. What they were building in the 1990’s was a new way of looking at the business.

In this book, Cross documents the difficulty to reimagine hotel pricing and decision making in the last decade of the twentieth century. It was a time when the Internet was young and unruly and no one had ever heard of “big data.”

The book also serves as a crash course of what it takes to succeed in the hospitality industry and how to get your ideas heard as you rise up the ranks.

Gregory Cross is the founder and creator of Hilton Hotels Corporation’s revenue management discipline. A hospitality veteran of thirty-eight years, he was also the first senior vice president of revenue management for Hyatt Hotels Corporation. In 2015, he was the inaugural recipient of the Vanguard Award for Lifetime Achievement in Revenue Management from the Hospitality Sales & Marketing Association International for his significant contributions to the field of pricing and revenue optimization in the hospitality industry. He retired in 2018 and lives with his wife, Jill, in La Quinta, California.