In and Around the Arena

The 100-Year History of the Fortuna Rodeo 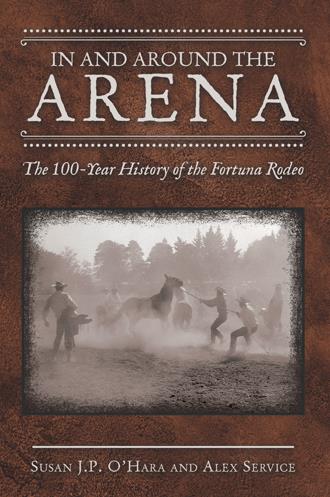 Chapter One: Roots of the Fortuna Rodeo

Located in Northern California, Fortuna is a town seemingly steeped in the redwood logging industry. Yet, this community has held a rodeo since 1921, an event that is an integral part of the region’s celebrations of home, community, and country. Thoughts of rodeos and the “Wild West” seem far from this community surrounded by large redwood trees and rich bottom lands. The word “rodeo” tends to bring to mind images of the west in Texas, Wyoming or Montana, or paintings by Charles Russell and Frederic Remington. This imagery has also played across the big screen in “westerns,” in the novels of Louis L’Amour, Zane Grey and Owen Wister, and in country western songs. Mention a rodeo, and the mind conjures up scenes of cowboys roping or on the backs of bucking broncs and bulls. Conversely, views of tall redwoods, ocean beaches, and tree-covered mountains are not generally what come to mind when rodeos are mentioned. However, the roots of ranching in Humboldt County precede all but the earliest rodeos. The history of the rodeo, and of Fortuna, reveals the growth of a town as well as its connections to not only California and the history of the United States but also to the world. It is worthy of understanding as it uncovers the unique aspects of the community and the influences upon its growth, as well as the dedication of many people to put on the rodeo each year.

The area around Humboldt Bay was first settled by European-Americans in 1850, and these early settlers were soon supplied with cattle driven up from the Sacramento Valley. Thus the Fortuna Rodeo, although held in a community rooted in the redwood lumber industry, is actually based on a rich ranching tradition as well as on the romance of the wild west.

The earliest rodeos held in the United States were based on ranching activities, especially the round-up. A rodeo held in Prescott, Arizona on July 4, 1888 is credited with originating many traditional rodeo events such as bronc and bull riding. Rodeos owe much to the expertise of vaqueros who excelled in roping, including the name given the event. Friendly competition to see who could ride the rankest animals became another popular aspect of the sport. Rodeos gained popularity in the 1890s as the frontier itself became a thing of the past, and popular shows from Buffalo Bill Cody and others helped create the myth of the old west. Rodeos sprang up as annual events in many communities, including the California Rodeo, first held in Salinas in 1911. By the 1920s rodeos had become popular events, larger rodeos being held in Eastern cities, including New York City. The rodeo at Madison Square Garden, for instance, often lasted for 30 days.

The history of the Fortuna Rodeo, therefore, begins long before 1921, and its success is the result of various historical influences such as pioneer pride, romanticizing of the old west, the struggle between man and nature, and the wish to escape from modernization.

In many ways the history of the Rodeo is also the history of Fortuna. The rodeo’s survival is due to the efforts of many businessmen and women of the town. The growth of Fortuna is reflected in the rodeo and its annual parades and Rodeo Week events. The story reflects pride in community and country, and also reflects the community’s changing priorities and the impact of larger events such as the World Wars and the Great Depression.

The roots of the Fortuna Rodeo stretch back to the Euro-American settlement of Humboldt County and the early ranchers who settled there. Drawn to California by the lure of gold, many frustrated gold seekers began to explore and settle the farthest reaches of the new state. Some found their pot of gold through raising cattle, feeding the growing cities of San Francisco and Sacramento. The discovery of gold transformed Alta California from a Mexican outpost into a booming state, part of the United States by 1850. California, therefore, did not go through the “frontier” phase that many other western states experienced in their settlement.

A case in point is the creation of Eureka and other communities in Humboldt County. The year California became a state, a group of entrepreneurs on board the Laura Virginia sailed into a nearly landlocked bay in Northern California, which they called Humboldt after the German scientist and explorer, Alexander von Humboldt. The goal was to create a direct route to the Trinity gold mines, providing supplies to the miners. Soon, however, the settlers also discovered “red gold” in the form of the giant redwoods. The redwoods were first harvested in the early 1850s; a ready market was to be found in the San Francisco bay area. Mills could soon be found around the bay. The work to log them, and cut them into usable lumber was very labor intensive. A large work crew demanded a steady supply of food. The demand was met by many early settlers.

Thus, although sometimes overlooked, the ranching history of Humboldt County began simultaneously with the lumber industry, and has a history of its own as rich and as varied as the timber trade.

Explore the history of the Fortuna Rodeo from its origins in 1921 up to the present day with this intriguing history packed with photographs and lore of Humboldt County, California. The rodeo continues as a mainstay of Fortuna, with the 2020 event being the first to be canceled since the end of World War II. In addition to the rodeo itself, this book paints a portrait of the history and growth of a small California town over the past century. Hundreds of photographs from the collections of community members, local museums, universities, and the National Cowboy and Western Heritage Museum illustrate the text. Among the many never-before-published images is a photograph from the collection of the Rodoni family showing the 1961 Fortuna Rodeo’s salute to “old cowboys” who had ridden in the rodeos of the 1920s. The book also features images created by Fortuna photographer Rudy Gillard, a rodeo board member and official photographer of the Fortuna Rodeo, between 1955 and 1981. Dedicated to the Fortuna Rodeo board and to all who have participated in the Fortuna Rodeo, you’ll find In and Around the Arena a fascinating read.

Susan O’Hara and Alex Service have collaborated on several writing projects on the history of Humboldt County, California. Service is curator of the Fortuna Depot Museum and earned her doctorate in medieval studies from the University of York in England. O’Hara earned a master’s in history from U.C. Santa Barbara and is a teacher in Southern Humboldt County. Funds raised through the sale of this book will benefit the Fortuna Depot Museum. Established in 1976 as the City of Fortuna’s U.S. Bicentennial project, the museum’s mission is to preserve and interpret the history of the Eel River Valley.