A Lifesaving Primer for You and Your Loved Ones

by Walter B. Biondi 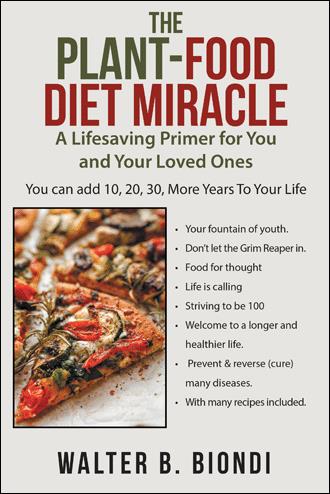 Hippocrates was the so-called Greek father of medicine who lived over 2,400 years ago. He once wrote, “Before you heal someone, ask him if he is willing to give up the things that made him sick.” Recent medical discoveries prove Hippocrates was correct. Modern day medicine has unquestionably shown that dozens of medical conditions and diseases are caused by, and can be cured by, what we eat.

The Plant-Food Diet Miracle is an informative, pragmatic book that shares the importance of eating plant-based foods. Diets based on plants have repeatedly improved people’s health. It’s that simple. This educational book is also packed with delicious, nutritious recipes celebrating plant foods.

If you would like to live—in much better health—an additional ten, twenty, or even thirty years longer, then this book will expedite you on your quest. It’s time to take business away from the medical and pharmaceutical industries and heal yourself with the help of revelations that are life changing, if you dare to read what many don’t want you to know.

Walt Biondi is the bestselling author of Jeremiah’s Tale and the internationally award-winning The Promiscuous Puppeteer. Born in Pennsylvania and now living in Port Ludlow, Washington, he previously directed multiple federal organizations and was the recipient of the President’s United States Government Senior Executive of the Year Award. He has consistently used the proceeds from his businesses and books for charitable endeavors.