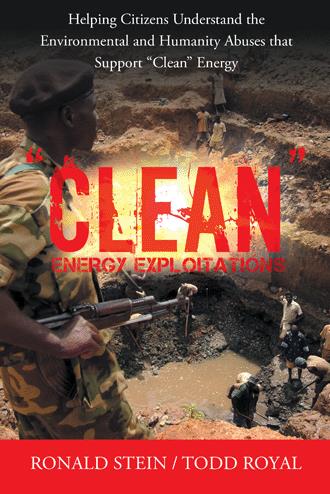 At a rapid pace, the richer developed countries and their governments are modifying their energy policies toward their use of fossil fuels by switching to electric vehicles and electrifying societies with intermittent electricity from wind turbines, solar panels, and EV batteries.

The book “Clean Energy Exploitations – Helping citizens understand the environmental and humanity abuses that support clean energy” provides a look at the human rights and environmental abuses that are occurring mining for the exotic minerals and metals to support the world’s green passion for electric vehicles (EVs) and intermittent electricity generated from wind and solar. Ron and Todd believe this is desperately needed, and why they wrote this book.

Energy is more than just intermittent electricity from wind, solar, and electric vehicle (EV) batteries, and battery energy storage systems (BESS) for electrical grids. Lifestyles, economies, and electricity include over 6,000 products from petroleum derivatives that “makes things and moves products,” and the various fuels, required by every transportation infrastructure for prosperous societies. Energy literacy will enhance one’s comprehension that the cost of energy affects everything: the food we eat, the clothes we wear, transportation, communications, housing, healthcare, and daily living made possible by energy.

Beyond the energy stability needed in hospital settings where the products produced from petroleum are what enables the heroic healthcare workforce to perform. Products such as critical medical equipment like ultrasound systems, ventilators, CT systems, X-ray, personal protection equipment, medicines, masks, gloves, soap, hand sanitizers, and vaccines would not be available without a barrel of crude oil. Humanity would be severely deprived without derivatives from petroleum that are manufactured from traditional fossil fuels which were virtually non-existent before 1900.

Ron and Todd are energy agnostics who only want to share the facts for you to be further energy literate. They provide in-depth discussions, and explanations in their books, Op Ed articles, radio and TV interviews, and public speaking engagements.

Chapters in the book, “Clean Energy Exploitations – Helping citizens understand the environmental and humanity abuses that support clean energy” will assist readers with the following:

An introductory understanding as to why the United States of America, the largest economy in the history of mankind, representing 4 percent of the world’s population (330 million vs 7.8 billion) could literally shut down, and cease to exist, and global emissions from the world’s approximately 7.8 billion population will still explode in the coming years from the population growth and economic development of China, India, and Africa and their dominating use of coal-fired power plants for electricity. Additionally, the world’s leaders continue to pursue the exotic minerals and metals being mined in poorer foreign countries to support the materials needed by wind, solar, and EV batteries.

Learn more about California, the 5th largest economy in the world, that imports more electricity than any other state. Why they are the only state in America that imports most of its crude oil from foreign countries while having the highest costs for electricity and fuels in America. California’s dysfunctional energy plan “leaks” emissions to other states and countries for the state’s electricity and energy needs, and for the exotic minerals and metals needed for wind, solar, and EV batteries, to help achieve in-state emission reductions. The states green transition is predicated on the hopes that nearby states will continually be able to generate enough electricity to replace the shuttered California power plants to support the 5th largest economy in the world.

How Germany, the first country to go Green, with 1 percent of the world’s 8 billion population, now has the highest cost of electricity in the world. The shuttering of most of their continuous and uninterruptable electricity from natural gas, nuclear, and coal, for intermittent electricity from wind and solar, now has its residents enduring the cost burdens of Germanys environmental policies, which will have zero impact on global emissions.

Learn details about Australia, the second country to go Green, with 0.1 percent of the world’s 8 billion population, continues building solar and wind farms even though power rationing is already in place when air conditioners run continually during hot summer months, and the daily spot pricing for electricity is among the highest in the world. Its residents are forced into overreliance on renewables, causing economic floundering and national security issues with China.

An expose of why we get very excited when we “see” EV’s and intermittent electricity being generated from wind and solar. What we do not see is the environmental degradations occurring worldwide from the mining of the minerals and metals in poorer foreign countries around the world required to support and manufacture intermittent electricity in richer developed countries.

Attain a better understanding of why we visually see EV’s and renewables, and believe they are generating clean electricity, but we cannot see the worldwide human atrocities that are accompanying the mining of the exotic minerals and metals to support wind turbines, solar panels and EV batteries. Humanity abuses are “leaked” to other countries to achieve lower emissions in richer developed countries.

Become more knowledgeable about the two largest countries, China and India representing more than 35 percent of the world’s 8 billion population that have amassed the most coal fired power plants in the world, dominating world emission, and are building more to meet their needs for affordable, reliable, abundant, and flexible sources for electricity.

Ron and Todd look forward to hearing from you and speaking further about “Clean Energy Exploitations – Helping citizens understand the environmental and humanity abuses that support clean energy”. Hopefully, you are in concurrence that the world’s war on pollution to reduce emissions must be ethical and should not thrive off environmental and human rights abuses in the poorer developing countries mining for the exotic minerals and metals to support the world’s green passion for BESS’, EV batteries and intermittent electricity generated from wind and solar.

The global focus on reducing emissions must be ethical instead of supporting environmental degradation.

The book Clean Energy Exploitations – Helping citizens understand the environmental and humanity abuses that support ‘clean’ energy” is a Nominee for the 2022 Pulitzer Prize competition in the General Nonfiction category. Pulitzer Prize Winners and Finalists will be announced in April 2022.

They also emphasize the global nature of the problem, noting that the United States of America could cease to exist and we'd see environmental problems get worse. In this book, they answer questions such as:

Would the Green New Deal cut worldwide emissions?
What toll is energy racism and inequality taking on the world?
How effective are renewable forms of energy in meeting our needs?
Whose duty is it to reduce harmful pollution?

Green advocates often say they support sustainable and ethical coffee, sneakers, handbags, and diamonds-and they claim they won't tolerate unsafe conditions. But when it comes to green energy and battery energy storage systems for electrical grids and electric vehicles, the authors say it is a different story.

Ronald Stein, P.E., is an engineer and founder of PTS Advance, drawing upon decades of project management and business development experience. He is an internationally published columnist and energy consultant who writes frequently about all aspects of energy and economics and is a policy adviser for The Heartland Institute.

Todd Royal is an independent public policy consultant focusing on the geopolitical implications of energy. His scholarly works are on energy, geopolitics, national security, and foreign policy.

Both authors are energy agnostics dedicated to helping citizens understand the abuses that support “clean” energy.