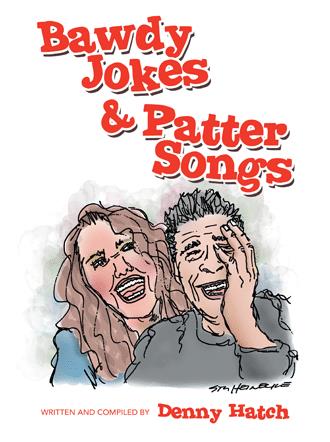 (The Most Fun You Can Have with the English Language)

The Funniest Joke in the

History of the World!

(If you know a funnier one,

Hackett was a homely, overweight little gnome with a thick Brooklyn accent and reminiscent of the Pillsbury Doughboy. He made many appearances on NBC’s Tonight Show with the irrepressible Johnny Carson. One night he told — and acted out — what has to be the funniest joke in the history of the world. His schtick that night was three animal jokes — about a chicken, a cow and a duck.

I invite you to watch Buddy tell the chicken and the cow jokes. Then fasten your seat belt for the duck joke.

NOTE: If you are reading the print version of Long Jokes &amp; Patter Songs (or if the link above fails to connect) turn on your iPhone, iPad, laptop, desktop computer or smart TV, go to YouTube and enter these YouTube Key Words:

Since age 10 (or younger) I have heard bawdy jokes at parties, at dinners, at large and small gatherings. I memorized many of them and often jotted down punchlines. What follows are the funniest stories that have always caused me to laff out loud over the past 75 years and enabled me to make others to guffaw. (Note: These are for adults. Many are rated R.)

Who These Jokes and Patter Songs Are For

• I conceived of this collection for every person who likes to lighten up a gathering of friends, family and associates. If you collect jokes, here are 87—most of which you hopefully have not heard—to add to your repertoire.

• Also stand-up entertainers, monologists, comics, emcees and miscellaneous performers can add these jokes to your repertoires and maybe intersperse their routines with patter songs.

• Serious and unserious businessmen and women, lecturers and teachers can spice up your PowerPoint presentations with some off-beat material.

• Improv and traditional theater groups can use this collection as an inspirational workbook and source of unique raw material to create lively evenings.

Let me share with you Joke #1 in this collection:

It was Sadie’s 35th birthday and Moishe left the office at 10:00 a.m. to go search for a present. He combed midtown Manhattan and found nothing Sadie would like. Finally, in the lower concourse of the RCA building he passed a pet shop. In the window was a darling little monkey in a cage.

“Sadie will love this!” Moishe exclaimed to himself. He went into the store and bought and paid for the monkey. He had the proprietor wrap the cage with birthday paper, a bow and learned about the care and feeding of monkeys.

Moishe gave the storeowner his address in the Bronx and asked that the monkey be delivered right away.

When Moishe got home to the one-bedroom apartment that afternoon, Sadie was in a dither.

“Did you get my present?”

“Moishe, it’s so cute, but where will it live?”

“It’s a new member of the family. He’ll live with us!

“But where will it sleep?”

“He a member of the family. He’ll sleep with us.”

“But Moishe… The smell…

We all know what jokes are. Not everybody is acquainted with patter songs.

• These are songs with tunes and recitative (reciting words in conversational style).

• Patter songs are found on Broadway, in opera, vaudeville, in nightclubs and, of course, Gilbert &amp; Sullivan and Danny Kaye.

Not only do you have 110 YouTube links to top entertainers performing 87 patter songs, but also links to the actual texts.

If you make a speech or a PowerPoint presentation, you can dazzle your audience by tossing in the surprise of a patter song (or just a verse or two).

Patter songs sound fast. However, as you watch Marc Ginsburg below you will hear every word and every syllable. (Later he shows off by speeding it up.)

An Example of a Delightful Modern Patter Song.

Not Always Needed: The Music

The rhymes of patter songs are so clever they can be performed without music—spoken in “recitative” (recited in conversational speech like you are talking with many of the words on the same note.)

On January 23, 1941 a supernova burst onto the stage of Broadway’s Alvin Theater on West 52nd Street. The show was Lady in the Dark by Moss Hart with music by Kurt Weill and Lyrics by Ira Gershwin. That brilliant exploding star was 30-year-old Danny Kaye, who performed perhaps the most challenging, tongue-tripping patter song ever written: “Tchaikovsky and Other Russian Composers.”

Thirty years later Kaye reprised it in an interview with Dick Cavett, where he ripped through the names of 56 Russian classical composers in brain-spinning 37 seconds.

What’s more, he did it with such precise diction you can hear every name. Have a look:

Welcome to the party!

Welcome to the party!

•You will start with a YouTube link to the Funniest Joke in the History of the World. (If you know a funnier one, I'd love to hear it!)

•You will have a repertoire of 87 of the best thigh-slappers I have managed to remember over the past 75 years. (Note: These are for adults. Most are R-rated.)

•You'll discover Bawdy Jokes & Patter Songs comes alive with YouTube links to 110 spectacular performances of all these masterpieces by beloved entertainers that have wowed audiences over the years. Included: Noel Coward’s "Mad Dogs and Englishmen" at the Desert Inn in Las Vegas, Robert Preston’s Music Man rendition of “Ya Got Trouble Right Here in River City” and the epic lunacy of Danny Kaye ripping through the tongue-twisting names of 56 Russian Composers in a brain spinning 37 seconds.

•Think of it! With a mouse click you'll call up hours of world-class entertainment on any device from small to huge: iPhone, iPad, laptop, desktop -- all the way up to those splendid, wall-sized smart TVs.

•You'll also have access to the full texts of these songs in case you itch learn them. With or without musical accompaniment, these jokes and patter songs are true dazzlers -- on stage, at the dinner table, in your living room, on Zoom or as audience wake-ups in PowerPoint presentations.

In short, I loved creating Bawdy Jokes & Patter Songs. I guarantee you're gonna love owning it. So will theatrical producers, your friends, family and business associates whom you will continually delight with your new repertoire of humor, songs and zaniness. It's a hoot!

Denny Hatch has no credentials. He has spent his sixty-year career in advertising, marketing, and direct marketing. He is the author of seven business books and four novels.