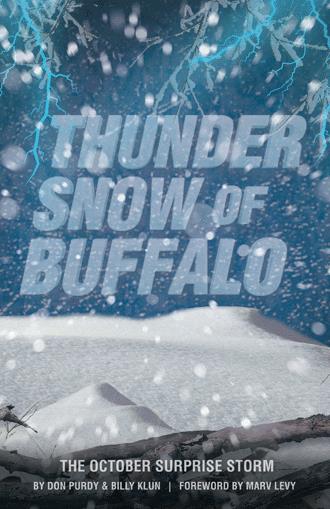 When the sun rose - though I had never been less sure that it would - on Friday, October 13th, 2006, the Buffalo area awoke, surveyed their landscape, and collectively thought, “No way that just happened.” Perhaps from Mother Nature’s perspective it was awesome, but our reaction was definitely the former.
At about 6:00 am, we made our way downstairs. It was time to inevitably lay eyes upon reality and prepare ourselves for a cleanup unlike anything we’d ever faced. Visually, it was nearly impossible to digest the landscape. Tree limbs the size of cars dangled, seemingly hanging by a thread, lovingly referred to by many as “widowmakers” until they were brought down safely. Even longer limbs and entire trees laid across the street in every possible direction like a giant game of Pick-up Stix. Intermingled was an imploded spaghetti factory of downed power lines and beneath that were the remnants of cars, lawns, and whatever else was naively left outside assuming it would survive a little bit of snow.
[...]
Because we were unable to open the front door, we were forced to use the back door to make our way toward the front yard. There, on our roof, sat about one-third of an enormous oak tree which we instantly knew was the one that so violently rocked our world at 3:30 am. No wonder it shook the house, I thought. At this time, I was unaware that much of this tree was not only on the house, but also in the house. Looking in the attic, which requires opening a small door to access, didn’t even cross my mind at that time.
We shifted our attention toward the backyard and pool area: it looked like another horizontal jungle. Several trees had sliced through our fence in about a dozen different places like a hot knife through butter. Thankfully, none landed on the pool cover we’d just paid $1,500 for. (And yes, to my friends in Florida, we must cover our pools for half the year.)
Where to begin? Should we begin? How dangerous was it?
[...]
Don Paul admittedly underestimated the degree to which the snow threatened the trees and other greenery in his initial report… As he would detail in hindsight, the “incredibly heavy water laden slush”2 was coming down on trees that still had most of their leaves, making perfect perches for this clingy snow to latch onto; the problem was that the ground was already well saturated from a wet period before this storm. This is why the heavy branches were so much better able to pull entire trees down by uprooting them, leading to the devastating damage to the electrical grid in the area. Chesley McNeil was also incorrect in believing that the snow would not stick: “Even though it started snowing early in the evening, it really didn’t stick to the ground until the evening when the storm turned the most intense.”
The electrical outages would prove to be prolific, for many lasting over a week - over 400,000 were without power at one point or another; 70% of Buffalonians and 90% of suburbanites in the Northern and Eastern suburbs were impacted. Don claims in his Buffalo News article, “It is safe to say this was the biggest and most destructive lake snowstorm in October ever experienced in the metro area. In terms of physical damage, it was the most costly storm in any month - period.”2 Ironically, shortly after the Storm was over, the weather shifted returning the area to more mild temperatures, saving some from cold sleeps.
[...]
The Bills selected Tight End Kevin Everett in the 3rd round of the 2005 NFL Draft out of the University of Miami. As an especially early riser, he didn’t need the call from his position coach, Charlie Coiner, to be alerted to the conditions outside that morning of Friday the 13th. Kevin told us, “I like to rise a little early to get things going and my blood flowing, so I took it upon myself to peep outside and WHOA.” He paused for a moment and went on to say, “What. Is. This? What is going on here? I am barricaded in.”
Moments after trying to make sense of the most unfamiliar landscape outside, Kevin’s phone rang again. This time it was Roscoe Parrish, Bills receiver and Kevin’s former teammate at the University of Miami who lived a few miles away and was clearly panicked. Roscoe, who had gone to bed at 10:00 pm without a clue about the weather, awoke to a phone call from Receivers Coach, Tyke Tolbert. Roscoe’s first instinct was to call Kevin, who had an Escalade, making clear to Kevin that he wanted NO part of driving in those conditions.
Kevin had done some Buffalo winter driving the previous year (2005) when, then Tight End Coach, Mike Miller gave him some excellent pointers that Kevin remembers using successfully on the Route 5 Skyway one day: approaching a hairpin turn exit too fast as he was heading into Downtown Buffalo, Kevin could hear Mike’s voice saying, “Pump the brakes. Pump the brakes.” Employing this method helped Kevin avoid crashing into the concrete barriers “by centimeters” and provided a driving lesson he’d never forget. With this experience and having just put new tires on his Escalade, he agreed to pick up Roscoe, but told him, “Be fully dressed and ready to go because, dude, I’m just inching through this parking lot right now.”
After the successful pickup, it was show-time. Kevin admits:
I was extremely paranoid during the drive, but somehow, I maintained my focus to get us to One Bills Drive safely. It was definitely a bizarre, new experience for me. I was blown away by Mother Nature that day. Roscoe cracked jokes (as he is prone to do) the whole way there about all the snow and ice, I think that took the edge off me while I was driving… I think. Hey, we got there safely.

The City of Buffalo, New York, is known for its snowy reputation, but the snowstorm of October 2006 was beyond unexpected.

It caught Buffalonians so off guard that it merits this book of true stories from citizens, including a foreword by Hall of Fame Coach Marv Levy and remarks from Mayor Byron Brown.

Don Purdy, a longtime executive with the Buffalo Bills, shares how he, his family, and the football organization overcame the surprise storm, which occurred Friday the 13th and remains the most destructive in Buffalo’s history. Over thirty players, coaches, and staff deliver their own fascinating memories, such as leaving their families behind without power or heat to travel to Detroit for a regular season game, along with never-before shared accounts of the inner workings of One Bills Drive and the National Football League.

Co-Author Billy Klun delivers superb literary framing throughout and even takes the reader inside his then fourteen-year-old mind struggling to make sense of a landscape turned upside down over night. In the overwhelming aftermath, the city’s recovery efforts were boosted by a pair of highly inventive, altruistic volunteers determined to replant the 55,000 lost trees and provide the downed tree carcasses a proud second life – Buffalo style.

In addition to the Bills organization’s quick-thinking and innovative operational adjustments, Thunder Snow of Buffalo offers plenty of humor and laughs, including rookie players from the South asking, “If this happens in October, what will the real winter months be like?”

Don Purdy, originally from Speculator, New York in the Adirondacks, served in the front office of the Buffalo Bills for twenty-seven years, with his last and longest role being Director of Football Administration. He saw the Bills through four Super Bowl appearances and managed a twenty-million-dollar budget, including workers’ compensation, team travel, and player contracts. Purdy is now Senior Adviser for Avrij Analytics, a leader in AI scouting and hiring platforms and serves on the President’s Advisory Board of Houghton College, as an alumni.

Billy Klun is a licensed mental health clinician specializing in addiction, geriatric, and personality disordered populations currently in private practice outside of Boston, Massachusetts. After earning his degree in psychology and English from SUNY at Buffalo, he received his Master of Arts in mental health counseling at the Boston College Lynch School of Education and his second master’s degree at UMass Boston in management of aging services.