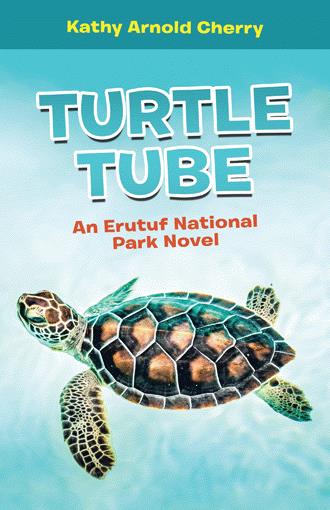 Erutuf National Park “What just happened?” Dean shouts, jumping up from the soft sand. “Where are we?” asks Reese. She stands slowly and dusts off the sand on her purple leggings. The white sand sparkles all around Dean and Reese and reflects like stars in a night sky. It seems like someone painted the sky the prettiest blue color. Palm trees behind them wave in the wind. The waves on the water come in and out on the beach shorelines. They don’t see any boats or another shoreline in the distance. “Well, I think we are on a beach!” says Dean while staring at the water. “Great one, brother!” replies Reese, turning around and looking behind them toward the trees. “Hey, where do boats go when they are sick?” asks Dean. He grins and reaches down to touch some soft sand. “Where?” Reese asks. She is looking for a boat somewhere out in the ocean. “To the dock!” Dean answers, falling down on the sand and giggling like a hyena. “Really? You are laughing while we are mysteriously placed on some random beach? We were just watching a video and landed somehow on a beach, and all you can do is tell one of your jokes and laugh,” Reese scolds. She starts walking down the beach away from him. She knows he simply wants some attention, but she wants to focus on where they are. “Hey, I just wanted to make you smile,” Dean yells as he runs up to catch up to her. “I am not smiling. I don’t understand where we are right now. I have to figure this out—and watch you too.” “I’m not that much younger than you. And I can help figure this out too. I mean, it’s kind of cool that we are standing on a beach somewhere,” Dean says, reaching to hold Reese’s hand. She squeezes it softly. “You’re right. I’m sorry I yelled at you. Let’s figure this out as a team, like when we play games at home.” She gives him a quick hug. “I’ll race you to the big shell up ahead!” Dean says. “Okay, go!” Reese answers. They dash ahead to the large shell. “I won! Hey, what kind of shell is this one? It’s huge,” Dean says while looking it over. The shell sits in the sand. It could be a play structure at a park, but it’s a real seashell hanging out on the beach. The cream and yellow colors sparkle on it. “You beat me! And I don’t know what kind of shell it is. Look, there are some people around those trees. Should we go talk to them?” Reese asks while pointing. “Mom says that we shouldn’t talk to strangers.” “Yes, but, we need a little help in figuring out where we are. They look like a regular family on a vacation. Let’s not tell them that we are lost. I’ll talk, and you just stay with me.” “Okay. I was hoping to make a sand fort first. I’m not doing any talking,” Dean says. “We can make sand forts later. Let’s go. I’ll talk.” Reese takes her brother’s thin hand into hers. Reese and Dean walk together toward the palm trees and the family while the ocean water crashes. A tall man with a baseball hat and sunglasses waits for his wife and two girls following behind him. He places a large beach bag on the sandy ground under the palm tree. The woman stands at average height with long brown hair tucked under a large, floppy brown beach hat. The two girls look about five and two years old. The youngest girl’s hair swings in long pigtails as she jogs to keep up with her mom and sister. The older sister talks and talks to her mom. Her mom waves to her husband to keep going and find a spot. He shakes his head no and waits. Reese and Dean walk through the sand toward the family. Dean starts humming an Imagine Dragons song, and Reese joins in. Then Dean freezes and looks at his sister with his big brown eyes. “What? Why did you stop?” Reese asks. “What if it starts to thunder and lightning?” Dean asks, still standing frozen. “It’s a song, not happening here. Look at these blue skies,” Reese replies. “Not the song. What if it really storms here, and we are on a beach?” Dean says as he stomps his feet into the sand. “We will be okay. I really don’t think that we need to worry about a storm. We will be home before we need to worry about the weather. Let’s keep walking and talk to this family,” Reese reassures him, and she puts her arm around his shoulders. Dean leans into the hug and hopes his sister is right about the weather.

Siblings Reese and Dean Walters love to watch online videos like many of their friends. Reese already has a dream of becoming a marine biologist who helps save sea turtles and other living creatures in the oceans. One day when Reese finds a new sea turtle video for them to watch, something mysterious begins to happen after she clicks play. As colors swirl around the siblings, Dean and Reese float into the air, twirling round and round until they land with a quiet bump on a beach. Moments later, they realize they are on a magical national park island where no one can see or hear them—except the sea turtle inhabitants. When Dean and Reese learn the sea turtles need their help protecting a secret map from pirates who want to take over the island, they must partner together to overcome obstacles while searching for the hidden map. But will they find the map before the pirates and return home safely? In this exciting tale, a wannabe marine biologist and her brother swirl into an online video to help sea turtles protect a magical national park from pirates.

Kathy Arnold Cherry studied anthropology and political science at Indiana University and earned a Master’s degree at DePaul University. Originally from Chicago, she lives in Northern California with her husband, two children, and pup. She has traveled to many national parks and dreams about the next one. You can learn more about what she is up to at kathycherrybooks.com.