The Curse of the Tribe

Book One: The Curse Seeks a Family 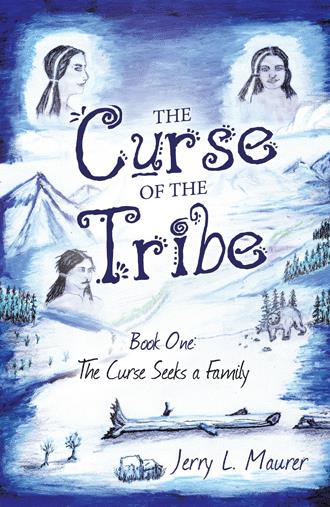 The bear had noticed us and turned to face us. As I turned back to look at the bear, before I started to find a tree, an arrow suddenly whizzed past me straight at the bear. Apparently, Little Badger had defiantly, and with the "it can't happen to me," attitude of youth, thought he could take out a grizzly at over fifty yards and with an underpowered bow!
As bad luck would have it, he didn't miss! The arrow, on a somewhat downward trajectory, entered high on the point of the shoulder and embedded itself along the shoulder and ribs just under the skin. To the grizzly it was probably more like a bad splinter than a wound from a weapon but it obviously hurt like a big splinter and he knew exactly where it had come from.
He twisted his head around to bite the arrow but couldn't get his teeth into it, as it was too close to its head. With a savage, angry roar he swung his massive head and beady eyes back on us and charged up the hill.
"Up the trees! Up the trees! Now!" I shouted and actually had to shove two of them in the right direction as they stood mesmerized by the charging grizzly.
They all began scampering up the slanted trunks to safety.
Before I started to run, I brought up the 30.06 and took one shot. It was a bit high but hit near the top of his head. Because of the angle and the heavy bone structure of a grizzly skull, the bullet glanced off and over the bear. The 240-grain slug buckled his front legs and he plowed face first into the dirt and leaves. He was up in an instant and let out a ground shaking roar and resumed his charge.
There was a ledge of rock between the bear and me about thirty yards down the hill. It formed a level spot that suddenly dropped off in a three or four-foot wall and each side sloped off to the left and right to meet the angle of the hill at about ten feet on either side. On the one hand the little outcropping would block my view of the bear as he charged up the hill but it also created a small barrier that would impede his charge.
As I turned to run, I realized my window of opportunity had slammed shut. I couldn't outrun the charging grizzly nor could I climb fast enough to get out of his reach even if I did make it to a tree.
There was also the disconcerting remembrance that a bear often continues its charge for ten to fifteen seconds, sometimes more, even after being shot through the heart. That meant even a perfect heart shot would leave plenty of time for him to get to me and shred me into bacon strips.
As the bear rounded the rock and made straight for me, I realized getting a bullet through the massive head and into the heart was impossible. My heart sank.
Suddenly, there was an earsplitting, screeching war cry on my right. I spun my head around and there was Sunflower. The thought flashed through my mind, "the screeching Blue Jay has returned."
She was about fifteen feet off of the ground with one foot on the trunk of a tree that was slanted up at a forty five-degree angle and one foot on a limb that stuck out in front of her, balancing in a perfect superhero pose.
I had to laugh; and the next thought flashing through my mind was, "at least I'll die laughing!"
She had already drawn her bow (part of the super hero pose) and she let fly with the arrow. It was a super fortunate, perfect shot, hitting the bear right behind the front shoulder and in or near the heart. The bear twisted its head back and grabbed the arrow in its teeth trying desperately to pull it out. The razor-sharp blades on the point would be slicing his insides as he jerked it back and forth because it was impossible for him to pull the arrow straight out.
He let loose with another earthshaking roar of rage but his turn to get the arrow had stopped his charge and turned his side somewhat towards me. That gave me about a forty five-degree side shot and the 240- grain, expandable bullet made him stagger a couple of steps sideways down the hill. As he started to gather himself again, I placed another slug right at the point of his shoulder which should have been a heart shot at that angle. swinging his massive head back toward me, he attempted to resume his charge but his fifteen seconds of spare energy had run out. He had only enough strength to emit another earthshaking, growling, screaming roar of rage and he collapsed!
I realized I was standing there shaking and drenched with sweat. I had never been that close to a certain gruesome death before. Sunflower’s perfect shot had saved my life and very possibly some of the others, as the bear might have found a way to get to one or more of them no matter how high they had climbed.
Slowly and very soberly they all came down and gathered around. Little Badger was in a semi-trance. He realized his impulsive act had almost gotten us killed. No one said anything and that was probably as hard for him to take as everyone hollering at him.
I went to Sunflower and gave her a hug, "you saved my life," I said seriously, "I couldn't get a good shot until you made him turn."
She actually blushed at such heartfelt praise.
"Okay guys," I said, taking a deep breath and trying to get my heart beat down to a normal rate, "it's time to lighten up and get to work."

A twenty-first century adventurer passes through a portal in the time/space continuum and is thrust into the sixteenth century before the coming of the Europeans. He finds himself in the Southwest amongst a tribe of hunter-gatherers on the brink of extinction. They call him “Chee.”

A young girl, born with a deformity, was declared to be a curse. The superstitions of the tribe required that she be cast out to die of exposure, starvation, or under the fangs of some beast, but she somehow survived. This little forest waif’s indomitable spirit and determined courage compel her to seek love, acceptance, and a family.

Chee gathers a group of young people who were willing to fight for survival. There are sisters, whose family was captured or killed. There is also a trio of young men, still in their teens, gradually emerging as skilled hunters and valiant warriors. With Chee’s help, can they bring hope to the tribe and stop the downward spiral to destruction? Can they bring love to the “curse of the tribe” who had despaired of ever finding a family?

Jerry Maurer grew up on a hardscrabble farm in the Appalachian Mountains. Born into a family of outdoorsmen, he learned to love hunting, fishing, camping, and hiking. Upon moving his family to Colorado and finishing a Master’s degree, he spent several years working on ranches, leading horse trips, packing gear and guiding youth into the Colorado wilderness.  His studies of the Anasazi and other indigenous cultures and many hours around a campfire gave rise to this historical fiction of life among the hunter/gatherers before the coming of the Europeans.