How I Got from Here to There, Not Always in a Straight Line 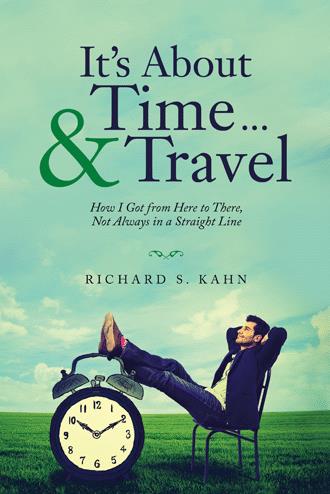 This wonderfully dramatic scene out of an old movie came to an abrupt end around 10 p.m. when two police officers in red and brown dress uniforms came beside me asking: “Are you Richard Kahn?” which I answered yes. This was followed by: “Can you come with us; we need to talk with you about the incident?” At which time, my Humphrey Bogart look-alike dropped his jaw, (but not the cigarette which held to his bottom lip like it was glued there) as my colleague Alan Fredericks asked me “What incident?”

I turned to my drinking mates as I put my brandy down and said, “I will tell you about it later, it’s really nothing” and then turned to the policemen and said “Where shall we talk?” They only moved to either side of me and pointed saying nothing more as they escorted me down one hallway, left at the end and down another hallway before descending down a narrow staircase into what looked like a basement or cellar area.

We walked down one more hard concrete walkway painted the same pale green as the walls of an old hospital and there was a door. They knocked on the door and it was opened by our attaché who greeted me with: “I told them everything you told me and they want to interrogate you, please sit down.”

First of all, I didn’t like the word “interrogate” and there were more than a dozen Chinese officials, most of them in either police uniforms or soldier uniforms or uniforms that I didn’t recognize. We were in a very narrow room that must have been 50 feet long, but only about 8 feet wide. Most of the officers sat on one side of the room. I sat with our attaché and the two officers that brought me down on the other side of the room. It was very uncomfortable and I was immediately nervous. No, I was actually scared, really scared. I was in China and it was 1983. They could do anything they wanted. I did not have the protection of our democratic way of life and government. I was frightened and began to shiver.

Our attaché noticed that I was nervous and told me “Don’t be nervous, just tell them what happened.” So I did. Then one of the more official looking officers in a solid brown uniform began asking me specific questions about where and when this happened. When I answered, he apparently translated everything into Chinese and several of them discussed my answers in Chinese. Then this one official would ask me another question.

At one point I remember beginning to sweat. Then I began to feel the urge to urinate. This could have been a dual result of all the water I drank during dinner and the nervous interrogation I was now experiencing. After a while, a solid green non-uniformed individual interrupted the official that was questioning me and asked me a direct question in the best English I had heard all night. I realized that she understood everything I said all along. I wondered how many others understood English. Then it was back and forth between the two officials interrogating me. They wanted details that I could not provide about the individuals. They repeated questions even though I had already answered that same question. I think they were trying to trip me up.

Suddenly, I realized that they did not believe me and they thought that I was hiding something and that I had committed a crime myself because this never happens in China. I really had to urinate now and asked if I could go to the restroom. They hesitated, said something in Chinese to each other and finally nodded "yes."

As I got up, the two heavily armed guards, carrying both sidearms and machine guns over their shoulders stood up and walked on either side of me as escorts to the restroom. Down the hall and to the right they guided me, as if I were a prisoner, to the restroom. One of them opened the door, held up his hand as a stop sign and walked in while I waited, legs crossed, for him to see if the restroom was clear. We were in the basement of the hotel and there was no one around, especially at this late hour. It was now past 11 p.m. and they had been interrogating me for more than an hour.

He reopened the door and nodded for me to enter. They both followed me and stood behind me while I went to the urinal. Normally I would not be able to piss with anyone watching me, let alone two armed guards watching intently. I really had to go and felt great relief, even some chills, as I stood there and urinated for what seemed like forever. I then turned and smiled at them and we left the restroom. I forgot to wash my hands, but I did remember to zipper my pants.

Once back in the interrogation room, they continued to ask me over and over again for details of the “incident” which is what they called it as they kept referring to the robbery rather than calling it a mugging, which they repeatedly told me does not happen in China. I gave them all the details, telling them about the spot where it happened, the billboards behind the three kids when I took their pictures and the bus they jumped on to escape.

Suddenly, one of them realized what I had said and asked in perfect English: “You have pictures of these three kids?”

Richard Kahn takes you on a tour of the world in It’s About Time . . . & Travel. Explore destinations and people as Richard shares his unique experiences in some of the hundred nations that he visited for business and pleasure as a travel writer and editor for more than fifty years.

Richard was often in the right place at the wrong time. He found himself in Grenada at the time of the coup that led to U.S. Marines landing on that Caribbean island. On another trip, he enjoyed a private lunch with the woman who, on that very same day, attempted the coup against Ferdinand Marcos in the Philippines. He even had the misfortune of being mugged in China, which nearly turned into an international incident.

This book is part travelogue and part memoir. Richard shares his view of the three Rs—Religion, Race Relations, and Right and Wrong—while informing both the armchair vacationer and experienced traveler. Not your normal travel guide, this is a glimpse behind the scenes of the travel industry and a look at what makes travel an entertaining and educational experience.

Richard S. Kahn is a veteran, award-winning travel writer, editor, radio talk show host, and public relations consultant who has specialized in travel for more than fifty years. Kahn was Editor of The Travel Agent magazine for 16 years and before than with Aviation Week magazine. His articles appeared in The New York Times, Newark Star Ledger, and USA Today, among other publications. He is the recipient of a Lifetime Achievement Award from the travel and hospitality industry. Today he remains active as a consultant to a variety of travel, tourism, and hospitality firms.