Growing Up Black in DC and Beating the Odds: Nettie’s DC Story of Perseverance, Hope, and Determination (PHD) 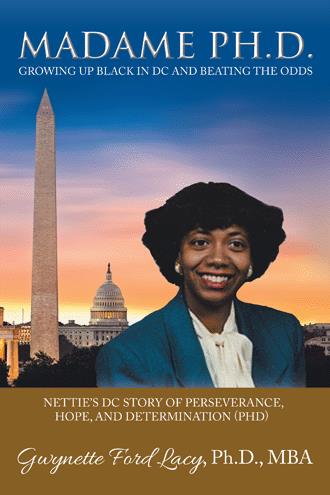 Every Ph.D. has a story. This book is about one of those stories; my story of how the great, great, great, granddaughter of a female slave named Sookey Jubeter, and the great granddaughter of man named George Floyd of South Carolina (a connection to the present-day George Floyd is being researched), beat the odds and grew up to become the first African-American female to earn a Ph.D. from the University of Wisconsin-Madison in her specialty, the business field of Labor-Management Relations, during the affirmative action years of the early 70’s. It is a story about a young black girl who overcomes a broken home, tough times, an attempted rape, bullying, and the mean streets of inner city Washington, DC to survive and succeed, despite her background, gender, and the color of her brown skin.

Nettie grew up in the northeast section of Washington, DC and attended elementary and junior high schools in Kingman Park, on the fringe of Capital Hill, in the shadow of RFK Stadium and the DC Armory. Products of a broken marriage, Nettie and her older sister become latchkey kids, who, after watching their mother go off to work at the Bureau of Engraving and Printing, get themselves to and from school each day. The sisters come straight home and spend hours doing their homework and studying until Mama Ford gets home from work. Both girls get excellent grades, often getting straight A’s and are nurtured and mentored by neighbors and family members. As rewards, the girls are allowed to go to the Howard Theatre to see their favorite acts such as the Motown Revue, James Brown and Aretha Franklin or to the local roller skating rink, and stop by eateries such as Ben’s Chili Bowl or Eddie Leonard’s to grab a bite to eat afterward.

Nettie was bullied and beaten for being smart, which results in her being transferred to a class for “gifted and talented” kids, a bus ride away from home. A year later, she returns to her neighborhood for school, continues in “honors” education in an environment with peers of like minds and becomes one of two valedictorians of her junior high school class.

A math wiz, STEM trailblazer and “fly girl”, all in one, Nettie goes on to the infamous McKinley Tech High School, where she enjoys being a cheerleader and meets the love of her life. She survives the 1968 riots after the assassination of her hero, Dr. Martin Luther King Jr. and a brush with the DC National Guard. She ignores her mother’s disapproval and engages in a protest march against the Washington Post. Prior to her senior year, she interns with the Department of the Navy, eventually gets a “Top Secret” clearance, and moonlights at Woodward and Lothrop Department Store, two jobs that will financially get her through her senior year of high school and her college years.

Nettie graduates in the top 2 percent of her class at McKinley Tech as a member of the National Honor Society and “Who’s Who”, and accepts a full tuition scholarship to the previously all-male Lincoln University in Pennsylvania, the first HBCU (historically black college/university) to provide baccalaureate degrees to black males. At Lincoln, Nettie competes well in that majority male environment and continues to find herself. She “bushes out her hair”, drops her “slave” nickname, and becomes more Afrocentric. She maintains her scholarship, takes on work-study jobs and tutors on campus, continues to work two jobs during her summers, and goes to summer school to shorten her time in college. She overcomes a brush with the Ku Klux Klan and pledges Alpha Kappa Alpha Sorority, Inc., while nurturing the ups and downs of a long-distance relationship. She graduates Who’s Who, magna cum laude and No. 1 in the Economics and Business Department, in three years, winning the Wall Street Journal Award.

Engaged during her senior year of college, Gwynette plans a beautiful wedding on a shoestring budget and returns to DC to marry the love of her life right after she graduates. She takes a job with the federal government at the General Accounting Office (GAO) as an auditor during the height of the Watergate scandal. After a year of marriage, the couple moves to Madison, Wisconsin to attend graduate school, where Gwynette continuously overcomes academic, social and cultural obstacles and roadblocks to obtain the MBA and Ph.D. degrees, while her husband completes a law degree.

The Lacys return to DC and after having their first child, Gwynette struggles to complete her Ph.D., while balancing motherhood and a career in academia. She becomes the first black female Ph.D. and tenured professor to serve as Chair of the Department of Management in the School of Business at the infamous Howard University. She later breaks the glass ceiling, holding several high-level administrative positions at Howard, including those of Associate Provost and Senior Academic Administrator. She is now a management consultant, trainer and motivational speaker for businesses and organizations throughout the United States and around the world.

This is a story about growing up black in DC in the 60’s and 70’s, with the joys and the pains of the times: the Civil Rights Movement, government politics, the Vietnam War, protests and marches, assassinations and riots, finding the answers to life, and creating a life that matters. It is also a story of the triumphs, music and college life of those times, and the story of a great love affair. It is an inspirational and motivational book about perseverance, hope and determination (PHD).

Reviewers of this book have compared it to classics such as “I Know Why a Caged Bird Sings,” The Bluest Eye,” and “Manchild in the Promised Land,” and contemporary books such as “The Butler”, “Hidden Figures,” and “Becoming”.

Every Ph.D. has a story, and Gwynette Ford Lacy is no exception. As a young black girl struggling amid the trappings of inner-city Washington, DC to overcome a broken home, an attempted sexual assault, and relentless bullying, she became determined to survive and succeed despite her background, gender, and the color of her skin.

In an intimate retelling of her personal story, Lacy details how she emerged from a childhood full of challenges to beat the odds and achieve a series of “firsts,” to become the first African American female to earn a Ph.D. in her business field from the University of Wisconsin-Madison. Lacy discloses how she transformed into a math whiz, STEM trailblazer, high school cheerleader and activist. She received a tuition scholarship to the former all-male Lincoln University in Pennsylvania, where she pledged Alpha Kappa Alpha Sorority and graduated magna cum laude, in three years, earning her department’s Wall Street Journal Award. The great, great, great granddaughter of a female slave, Lacy provides an eye-opening glimpse into major events in American history in the 1960’s and 70’s, such as the Civil Rights Movement, assassinations and riots, and the Vietnam War. She also shares the triumphs she experienced along the way, including laughter, love, and joy, and how she created a life that matters through perseverance, hope and determination (PHD).