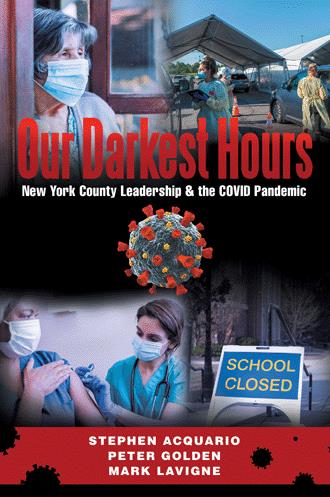 The language was simple. The ramifications were more complicated.

During the late hours of Monday, March 2, more than two weeks before the COVID-19 pandemic was declared, the New York State Legislature passed Governor Program Bill #8. This legislation provided for a $40 Million public health emergency appropriation for the governor to fight the pandemic. The bill’s language also gave Governor Cuomo unprecedented powers in an unprecedented time, the largest and most aggressive global public health crisis in more than 100 years. These powers allowed him to make laws without a vote of state lawmakers.

In fact, the State Legislature shaped how the Governor could use these executive powers to fight the pandemic by expanding his powers and making it clear that under law a virus such as COVID-19 could qualify as a statewide emergency. New York Executive Law 29a was changed to now read (in relevant parts):

“Subject to the state constitution, the federal constitution and federal statutes and regulations, the governor may by executive order temporarily suspend [specific provisions of] any statute, local law, ordinance, or orders, rules or regulations, or parts thereof, of any agency during a state disaster emergency, if compliance with such provisions would prevent, hinder, or delay action necessary to cope with the disaster or if necessary to assist or aid in coping with such disaster. The governor, by executive order, may issue any directive during a state disaster emergency declared in the following instances: fire, flood, earthquake, hurricane, tornado, high water, landslide, mudslide, wind, storm, wave action, volcanic activity, epidemic, disease outbreak, air contamination, terrorism, cyber event, blight, drought, infestation, explosion, radiological accident, nuclear, chemical, biological, or bacteriological release, water contamination, bridge failure or bridge collapse. Any such directive must be necessary to cope with the disaster and may provide for procedures reasonably necessary to enforce such directive.”

The clear inclusion of “epidemic” and “disease outbreak” as emergencies that would qualify under these expanded gubernatorial powers helped keep future challenges to this authority at bay. There is little case law that defines the extent of the reach of Executive Orders (EO) in the declaration of a statewide emergency, which is more commonly used for natural disasters such as high-level ice storms, floods, hurricanes, or superstorms like Sandy, which slammed New York State just over a decade ago. This unprecedented redistribution of power, included as part of the state’s coronavirus response efforts, gave the governor these emergency powers for more than a year, until April 1, 2021.

Five days after the State Legislature granted him these extraordinary powers, on March 7, 2020, he signed his first Covid-19 related Executive Order 202, declaring “a State disaster emergency for the entire State of New York. This Executive Order shall be in effect until September 7, 2020.”

In addition to expanding the governor’s executive powers, the State Legislature also ceded substantial fiscal powers to the governor in their adoption of the SFY 2020-21 State Budget. The enacted budget granted significant powers to the budget director, who works directly for the Governor, to maintain a balanced budget for the 2020-2021 Fiscal Year. The enacted State Budget gave authority and discretion to the budget director to withhold or reduce funding in the Aid to Localities Budget to respond to the direct and indirect economic, financial, and social effects of the COVID-19 pandemic.

These three actions: 1. granting the governor expanded executive orders in emergency declarations, 2. the governor’s first Executive Order, and 3. allowing the budget director to unilaterally cut Aid to Local Governments—greatly upended the power balance in the State Capital. The traditional way of governing in New York State was set aside once Governor Cuomo declared the state of emergency. The Executive Branch became much more powerful than the Legislative Branch, and the State was set up to have much more power over local governments.

Ultimately, the governor enacted nearly 100 Executive Orders (EOs) amending scores of state and local laws, rules and regulations to address the public health emergency. These EO’s carry the same weight as any other law enacted by the State Legislature, on a temporary basis during the state of emergency.

The EO’s, many of them controversial and constitutionally questionable, directed how residents could live, work, and seek entertainment, practice religion, get food, access shelter and move about in their communities. They addressed K-12 school operations and college schedules, deemed businesses essential or non-essential, and closed all in-person operations of non-essential businesses. The EO’s required new mandates on hospitals, nursing homes and health care practices and regulated all aspect of society including authority over local governments. Many of these directives had to be enforced by state and local government officials, mostly local, which also raised issues with some of the new limits on individual freedoms, which were historically protected by the constitutions of the state and federal governments.

Limiting the Power of Local Governments
Interestingly, some of the first Executive Orders were directed at counties to limit their authority to act during the state of emergency. The third EO, 202.3, declared that any local emergency order, or charter, law, or regulation, that is in conflict with a New York State Executive Order is suspended. The governor essentially took control of governing New Yorkers through the pandemic, limiting the power of local leaders and requiring local governments to simply enforce the state’s directives.
By direction of the governor, the counties’ long-established emergency management protocol and home-rule authority were set aside in favor of a uniform state response. While the state needed county governments to provide services and enforcement, it was quickly understood that the governor would lean on a new centralized statewide command system, and not allow local governments to pursue a regional approach.

Nobody is coming to help, it’s up to us.

That was the mindset of New York’s county leaders, who within a couple of hours of a declared state of emergency, became the onsite incident commanders charged with protecting the lives and the health of families, friends, neighbors, and residents through the deadliest public health crisis in a century.

The COVID-19 pandemic took the life of over 50,000 New Yorkers in a year. These were their darkest hours, and here are their stories of leadership in the face of the chaotic and disjointed response from the state and federal government.

Our Darkest Hours provides a glimpse into the fear, struggle, triumph, and pain as leaders worked to protect people’s lives and livelihoods.

Stephen Acquario, Esq., has counseled local government officials on all aspects of governance for the past thirty years.

Peter Golden is an award-winning journalist, historian, and novelist. His latest novel, Nothing Is Forgotten, which explores the connection between the Holocaust and Cold War, is published by Atria Books/Simon & Schuster.