So You Think You Know Philip Larkin? 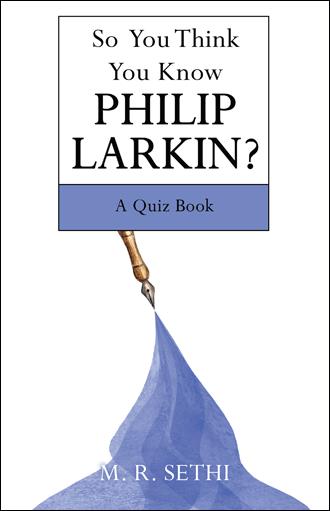 1. Philip Larkin met her in 1946 at Leicester University College. Their lifelong friendship continued until Larkin’s death in December 1985. Who was she?

3. Match the pairs of lovers

4. She was an English novelist whose career was revived when the critic Lord David Cecil and Philip Larkin both nominated her as the most underrated writer of the century. Who was she?

5. Larkin’s poem ‘Wild Oats’ begins, ‘About twenty years ago/Two girls came in where I worked— /A bosomy English rose/And her friend in specs I could talk to.’ Can you identify these girls?

6. Larkin’s poem ‘Latest Face’ was influenced by a lady whom he met at Queen’s University, Belfast, and had a brief affair with. Who was she?

7. Philip Larkin never married. His view of marriage may partly have been coloured by this woman’s warning of its disadvantages. In 1953, she told him, ‘I have just finished reading Love Among the Artists … in which occurs this passage “No: it is marriage that kills the heart and keeps it dead. Better starve the heart than overfeed it.”’ Who was she?

8. In one of his poems, Larkin is ‘desperate to pick out/Your hands, tiny in all that air, applauding’. Who is the person alluded to, and in which poem?

How beautiful you were, and near, and young,

10. Whose red granite headstone has a line from Larkin’s poem ‘An Arundel Tomb’, ‘What will survive of us is love’?

11. Larkin and she began an affair in 1975, when they were both in their fifties. After Larkin’s death, it was she who, acting on his wish, destroyed his diaries. Who was she?

12. Larkin writes, ‘We met at the end of the party, /When most of the drinks were dead/And all the glasses dirty.’ Whom did he meet?

13. Referring to his poem ‘Reference Back’, Larkin wrote to Monica Jones, ‘In a sense it is written from her viewpoint.’ Whose viewpoint?

14. Larkin and she became lovers when she was only sixteen, and they were engaged in 1948. The engagement was broken in 1950. Who was she?

15. Which woman does Larkin refer to in the following lines in his poem ‘Wild Oats’?

But it was the friend I took out,

And in seven years after that

16. Larkin’s relationship with her started in 1946. She moved into Larkin’s house in Newland Park and continued living there even after his death in 1985, till her own death in 2001. Who was she?

17. She was the most loving and intimate love interest of Larkin. She is said to the model for the character of Margaret Peel, Jim Dixon’s girlfriend in Kingsley Amis’s novel Lucky Jim. Who was she?

18. She is said to be inspiration for the character of Elvira Jones in Robert Conquest’s novel A World of Difference (1955) and Viola Masefield in Malcolm Bradbury’s novel Eating People Is Wrong. Who is she?

19. Two of the women in Larkin’s life were buried near Larkin’s grave in Cottingham Cemetery near Hull. Who were they?

(a) Eva Larkin and Winifred Arnott

(b) Monica Jones and Ruth Browman

20. Whom does Larkin see in a photograph album, ‘In pigtails, clutching a reluctant cat; … /Or lifting a heavy-headed rose / Beneath a trellis, or in a trilby hat’?

21. Larkin fell in love with the wife of Colin Strand, a friend of his in the Queen’s University, Belfast, where Larkin was a junior librarian. She became pregnant by Larkin but miscarried. Can you identify her?

22. What female pseudonym did Philip Larkin adopt as a lesbian writer of girls’ school stories?

23. In 1999, Ben Brown’s play Larkin with Women dramatised Larkin’s relationships with three of his lovers. Who among the following was not one of them?

24. Kingsley Amis modelled a character in his novel Lucky Jim on one of the women in Larkin’s lives. What was Larkin’s reaction?

(a) He appreciated the idea.

(b) Amis and Larkin’s relations strengthened.

(c) There was a temporary thaw in their relations.

25. About whom did Larkin write the following?

But when the August weather breaks

And rains begin, and brittle frost

Her worried summer look is lost.

26. Who does Larkin address in the following lines?

That was a pretty one, I heard you call

From the unsatisfactory hall

To the unsatisfactory room where I

Wasting my time at home, that you

Looked so much forward to.

27. As depicted in Larkin’s little drawings sometimes added to his letters, the three major women in her life appear as a mouse, a rabbit, and a whale. Who is who?

28. Which of Larkin’s women friends wrote the book Philip Larkin I Knew?

29. Who called Larkin a ‘casual, habitual racist, and an easy misogynist’?

30. Which of Larkin’s women drank herself to death at the age of forty-eight?

31. In which poem does Larkin write, ‘Within the dream you said:/ Let us kiss then./In this room, in this bed’?

32. Ben Brown’s play views Larkin’s life from the perspective of his difficulty with girls, and their difficulties with him. What is the play’s name?

Nothing seemed to escape the eyes of Philip Larkin, a contemporary English poet who achieved acclaim on the strength of a small body of work. While lyrically exploring the human experience, Larkin’s candid perceptions were enlivened by his acute power of observation—a unique literary talent that prompted his recognition as England’s other Poet Laureate.

In a fascinating quiz book that will appeal to both Larkin scholars and lovers of poetry and literature, retired English professor M. R. Sethi shares more than six hundred questions (with answers) that offer an opportunity to test knowledge regarding the life and works of the famous poet. Scholars and others will be tested on Larkin’s physical shortcomings, his first jobs, what he wore while mowing the lawn, why he once threatened to jump out a window, who was not one of his friends at Oxford, and much more that includes detailed questions regarding many of his poems.

So You Think You Know Philip Larkin? is a volume of questions and answers shared to test the knowledge of both scholars and poetry and literature aficionados about a famous, contemporary poet.

M. R. Sethi is a retired English professor and freelance writer who has published twelve books and more than five hundred articles. He is an avid quizzer with experience conducting numerous quiz shows. Sethi’s quiz columns have appeared in several periodicals.