What the Owls Told Alex 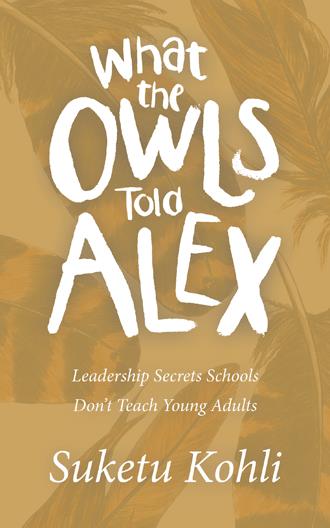 In middle India, 3000 years ago, lived a renowned scholar named Vishnu Sharma. One day, the king of the land invited him to his palace and requested him to school his sons on leadership. Many scholars had failed the task before Vishnu Sharma as the princes were arrogant and mischievous. Instead of adopting a traditional approach, Vishnu Sharma narrated stories to the princes to teach them leadership and political philosophy. The princes became deeply engrossed in the teachings and went on to become exceptional students. The collection of stories by Vishnu Sharma are called Panchatantra. What the Owls told Alex is inspired by the Panchatantra and is an homage to its pedagogical style. My first tryst with learning leadership happened when I was five years old. My grandmother used to feed me a mixture of rice and lentils steamed in a pressure cooker. The concoction would then get a generous dose of clarified butter. The dish called khichdi would be laid piping hot on the table. One day, in my eagerness, I prodded my fingers into the middle of the viscous khichdi. The lava-like khichdi was hot on the inside. It scalded my hands. My grandmother said, "Let me tell you a story for you to learn how to eat khichdi." Her words soothed me, and I listened intently to my first lesson learned through a story. Grandma narrated- -"King Nanda ruled northern India in the 3rd century BC. He was evil and tyrannized the population. Chanakya, a wise brahmin, could-not bear to see the kingdom going to waste. He groomed a brave boy named Chandragupta Maurya to take on the king. As days passed, the boy grew stronger and wanted to attack the capital of the king. Chanakya advised him that attacking the heart of the empire would mean inevitable defeat. They should start attacking the peripheral villages and conquer them individually, thus steadily encircling King Nanda. This strategy worked, and Chandragupta went on to defeat the king. My grandmother explained, "If you try to eat the khichdi straight from the center, you will burn yourself; if you start from the sides and go all around, you can enjoy it while it is still hot." This story was my primer in leadership. A leader listens to advice. A leader thinks strategically. A leader is aware of one's strengths and weaknesses. Leader & leadership Leadership is considered an individual skill, but leadership is a composite interaction between the leader and the social environment. Thus, leadership development is about developing the individual and building the capability in him/her to relate and grow by interacting with the environment. Leadership framework This book uses a well-researched holistic framework to help you reflect on essential leadership traits. This leadership framework is created by performing a meta-analysis on classical leadership theories, viz; Transformational leadership, Servant leadership, Trait theory, Charismatic leadership, and Authentic leadership. The framework has also benefitted from my discussions with several leadership development experts. Besides, I have poured my extensive corporate and consulting experience while creating the leadership framework. This leadership framework combines the intrapersonal and interpersonal traits needed to be an astute leader.

Leadership is the differentiator between success and failure. Based on years of research on What makes a Great Leader, What the Owls told Alex guides readers on how to be a leader in their sphere of life. The book presents a simple yet comprehensive framework on the traits required for leaders. The book follows Alex on the journey of finding his life’s purpose and becoming a leader of his school football team. During Alex’s journey, he is privy to a host of super story tellers who narrate short stories from history, mythology, and folklore to explain the nuances of leadership. By joining Alex on his quest, you’ll learn how to: • leverage lessons from empires of old to become a better leader; • lean on values when making important decisions; • identify what you love to do and want to get better at; • determine the steps you must take to achieve your vision. Each episode of the book ends with reflection questions that will enable you to chart your personal leadership journey and shine as a leader.

Suketu Kohli is an internationally recognized leadership development consultant and executive coach. In his current assignment at Amazon Web Services, he leads the Public Sector Sales University function for Asia Pacific & Japan. He has consulted with premium management consulting organizations and is a regular instructor on corporate educational programs. He holds an Executive Master in Change from INSEAD business school and has coached a multitude of senior professionals to become superior leaders. His innovative approach to leadership and capability development has won him many prestigious awards. He lives in Singapore and is passionate about mentoring young students and professionals.