Legends of the African Sun 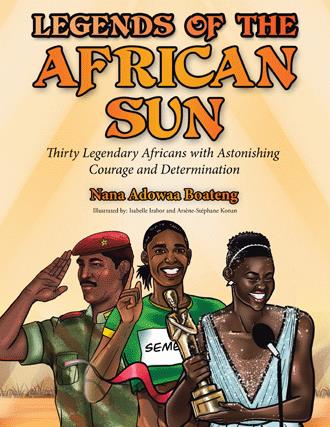 We enjoy so many freedoms today because some brave men and women fought very hard for them. One of these brave women was a young Queen called Yaa Asantewaa from Ashanti, Ghana. She was not only a brave queen, but she was also a farmer, a mother, a leader, and a defender of the Golden Stool. The Golden Stool was a sacred throne for the Ashanti kings. When the Ashanti king was banished to another country by the British people who were trying to rule over the Ashanti, Yaa was outraged. When none of the men stood up to fight the British, Yaa decided to lead the battle for the return of the king. She fought bravely with her army for months, but the British had far more soldiers and eventually captured her. Her bravery was rewarded when the King was finally allowed back in the country. Her battle is the last known one to be led by an African woman.

The African continent, where life began, has gifted us with amazing legends who have stood up against injustice and inspired us to be brave. They are kings and queens, warriors and environmentalists, writers and artists, inventors and innovators, thinkers and athletes. Some are women who have led battles against powerful enemies. Others have unique talents which allow them to do things that no one else can do. Legends of the African Sun tells the stories of thirty legendary African women and men. They come from various parts of Africa—East, West, South, and North. From Queen Nzingha of Ndongo, Angola, to Lupita Nyong’o of Nairobi, Kenya, to Desmond Tutu of Klerksdorp, South Africa, these legends defied the odds against them, enacted bold ideas, showed tremendous compassion and bravery, and serve as powerful role models for children. This collection of short biographies helps teach young children about legendary Africans and the problems and issues they confronted on their journeys.

Dr. Nana Adowaa Boateng is a Ghanaian economist, mother, and blogger. She was born in Italy and raised in Ghana, Kenya, and Tanzania. She has also lived in the UK, US, and South Africa. She has visited twenty-five African countries and currently lives in Côte d’Ivoire. She has a passion for telling uplifting African stories, often drawing from her multicultural experience and deep love for the African continent. This is her first children’s book.