Inequality and Poverty in Ethiopia 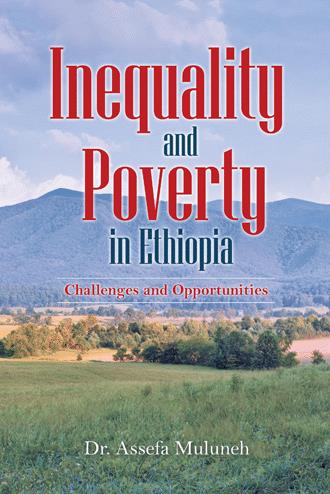 This book addresses the prevalence of inequality and poverty in Ethiopia and suggests strategies to solve the problems. The first chapter provides country background information, population, political structure, and the economy. The second chapter focuses on income distribution, household expenditure, cost of living, health, housing, and education inequalities. The highlights from the two chapters are summarized as follows:

For Ethiopians, life expectancy is 66 years, because most people do not have access to quality healthcare and better nutrition. Societies in developed countries live longer, with a life expectancy of 80 years. Maternal mortality rate in Ethiopia is 422 (per 100,000 live births) while it is 2 in Italy, 4 in Sweden, and 5 in Germany. In Ethiopia, there is one physician for 10,000 people, while in Germany there is one physician for about 239 people.

Income held by fourth 20% of Ethiopians declined from 21.3% in 2010 to 20.6% in 2015. On the contrary, income held by highest 20% increased from 41.7% to 46.7% during the same period. Ethiopia is also confronted by inflation. Food inflation increased to 25.9% during the month of April 2020. Ethiopia ranks 6th place in food inflation in the world. Venezuela and Zimbabwe rank first and second place, respectively.

The country is also facing housing shortages. The annual demand for housing (655,800 units) by far exceeds the housing supply of 165,000 units. This housing shortage excludes the urban poor because the market caters to wealthy individuals, and to those who provide collaterals.

With respect to international trade, Ethiopia’s major trading partners are the United States, Saudi Arabia, Germany, Switzerland, and China. Foreign trade accounts for 29% of the country’s GDP, with a negative trade balance of US $12.4 billion in 2019.

Chapter three provides an assessment of the development strategies of Ethiopia between 1960 and 2020. The review of evidence shows that past development programs have failed to tackle poverty. And despite the recently available evidence, which shows that poverty headcount decreased from the 2010 level of 29.6% to 23.5% in 2015, the poorest 10% of the population did not experience growth since 2005. As a result, poor people in 2016 were poorer than the poor in 2005.

Chapter four addresses the impact of environmental degradation on the poor. Major polluters are the world’s richest 1%. However, most air pollution-linked deaths occur in developing countries where laws are weak and not applied.
In the case of Ethiopia, where access to electricity is only available to 45% of the population, most Ethiopians resort to the daily use of wood, charcoal, or dung for cooking and heating purposes, thereby contributing to carbon gas emissions. Unsafe water also contributes to deaths. The share of deaths from unsafe water increased from 7.14 % in 1990 to 8.9% in 2017.


Chapter five discusses the implication of corruption and COVID 19 on economic growth and the poor.

Regarding corruption, most studies demonstrate that corruption is anti-growth, which disproportionally affects the poor. The comparative assessment on corruption (for 2020) identifies Denmark, New Zealand, Finland, Singapore, Sweden, Switzerland, and Norway as the least corrupt countries. Somalia, Syria, South Sudan, Yemen, and North Korea are the most corrupt countries. According to the 2019 “Bribery Risk Matrix”, Ethiopia, ranking 176th out of 200 countries with a risk score of 71, is listed as a high-risk country for bribe.

The pandemic also creates a burden on the poor. The UN estimates that the pandemic will push 71 million people back into extreme poverty.

Chapter six provides an overview of poverty, employment, and unemployment trends at the global level and in Ethiopia. So far, attempts to curbing poverty at the international and local levels have failed to provide solutions. The final chapter proposes recommendations to reduce inequality and pervasive poverty in Ethiopia.

To tackle pervasive poverty in Ethiopia, the root cause must be removed first. Only then can the country hope for progress.
Dr. Assefa Muluneh, formerly a senior economist at the Planning Office in Addis Ababa, Ethiopia, explores the dimensions and prevalence of poverty in Ethiopia. More importantly, he proposes strategies to solve the problems.
Laced with data and based on real-world experiences, the book serves as a guide to solve systemic poverty in Ethiopia and beyond. The author shares how poverty became such a big problem in Ethiopia and how it affects politics, education, and the economy.
The book also focuses on issues such as the cost of living, income distribution, housing, and how demographic trends will shape the future of the nation.
While Ethiopia became the fastest growing economy in Africa in 2018 and had an estimated gross domestic product of US$96.1 billion in 2019, it remains among the poorest countries in the world with a life expectancy of only sixty-six years.
Find out why poverty continues to be rampant in Ethiopia and what can be done to move the country forward with the insights and observations in Inequality and Poverty in Ethiopia.

Dr. Assefa Muluneh served as a senior economist at the Planning Office in Addis Ababa, Ethiopia. He has pursued his career in development economics and participated in job creation programs, in collaboration with International Labor Organization’s team of experts. He is engaged as a professor of economics and in research and scholarly activities in the United States.