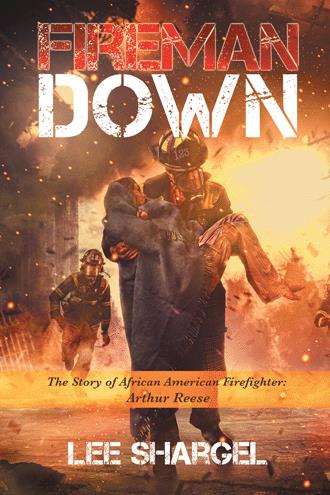 Behind him in the crew Cab were Mike Slominski and Billy-Ray Dycus. They were racing to the house fire on Claymore Street. "Captain, I just thought you should know…”Mike started to say but was interrupted by Captain Wild Bill.“Know what. Mike? That it was your fault that the damn snorkel fell off the ladder. I'm getting sick and tired of the way things are slackin' off at station One-Twenty-Three. Ever since that damn black Lieutenant Reese arrived, ain't nothing going right. It's time for some changes to be made around here.”The Captain said matter-of-factly. Billy-Ray just sat there and smiled. Mike turned and saw the smile on his face and gave Billy-Ray a good jab in the rib cage. "What the hell you go and do that for?”Billy-Ray choked. "You know damn well what it was for. The Lieutenant don't deserve the crap we been dishin' out is all, and you damn well know it.”Mike said in defense of the Lieutenant. "Don't deserve it! Hell, Mike, he's a damn Negro. How the hell are we supposed to treat him?”Billy-Ray askedd. "With the respect he deserves, Billy-Ray. He's a fireman, Dammit! It's about time he was treated like one. Galen is right. Artie Reese is a good man and deserves better. I'm through bustin' the Lieutenant's chops because he's African American. We need to apologize for what we done and take the consequences.”Mike said proudly. "Jesus H. Christ! Apologize! You, too! First it was Barney, then Galen and now YOU! I guess it's gonna be up to me and the Captain to get rid of this black son-of-a-bitch once and for all.” Billy-Ray said in defiance. At that moment, the fire trucks arrived at the scene of the house fire. The structure was already engulfed in flames. Before the truck came to a complete stop, Mike spun Billy-Ray around in his seat, grabbed him by the front of his fire coat and looked him square in the face. "Listen up, Billy-Ray. You can put them thoughts right out of your mind. Y'all ain't getting rid of nobody. Now come on. We got us a fire to fight." Mike said, as he pushed Billy-Ray out of the fire truck. The fire was getting worse. Flames were climbing out of the ground floor windows. Smoke was pouring out of the house. Farley and Barney had a hose line running from the pump truck and were pouring water into a large bay window. The glass had already shattered and it appeared that the rear of the house was being consumed by flames as well. Artie and Galen had their AirPaks on and were about to charge through the front door. The family that lived in the house had been taken to the edge of the street. The mother was screaming for her son. They had two children and only one had been accounted for. Then as the firemen were trying to assess the scene, the young boy appeared in the upstairs window. He screamed for help as smoke began billowing out of the window behind him. Flames were shooting out of the roof in the rear of the house. The Captain yelled for Billy-Ray and Mike to get the ladder up there. "Help!" The boy cried out again. "No time." Artie yelled. "Come on." Before anyone could say a word, Artie and Galen ran into the burning house.

It is the early 1980s when Artie and Angela Reese and their children move into their dream home in the Stoneybrook community in Charlotte, North Carolina, with the hope that the fears and prejudice that once overshadowed their African American family have melted away. Artie is now a lieutenant in the Charlotte Fire Department and Angela is an accountant for a banking firm. But as they settle in, no one has any idea of the everlasting effect that Artie and his family will soon have on the community and entire city. Unfortunately, Artie knows his new assignment at University Station is not going to be easy. The fire station houses a den of redneck racists who are determined to make his life miserable. Although he knows he will be the only black man there, he still needs to command respect and authority from his brothers in uniform. As he rescues victims in burning buildings that he is certain are racist, Artie transforms into a courageous hero who does not see color—only lives to be saved—a decision that seals his fate and determines his legacy. Fireman Down is the story of an African American firefighter who bravely wears his uniform during a time of racial unrest in Charlotte, North Carolina.

Lee Shargel is a screenwriter and creative writing instructor who is passionate about racial equality, empowerment, and the thought-provoking subjects of science and reality fiction. He is a Six Sigma Master Black Belt and powerful motivational speaker. Fireman Down is his fourth novel.