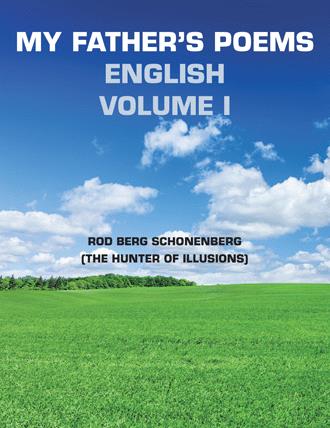 at Mount Washington Seminary, Baltimore, MD. when he was twelve

France, Italy, Spain and Switzerland. He becomes a Languages Professor,

finnally after many years later and before WWII, he returns with his

On earth nothing comes out of nothing.
So where does love come from?
Do time, planets and circumstances bring
or beget from the cosmic dust, love?
From cosmic dust in destiny’s womb.
Does it always come from above?
The love that makes our lives worthwhile,
even if now and then it changes its style.
It is the only thing worth living for, even if,
in some lives it comes only once and no more.
(From Is love something? Poem)

During his lifetime, Rod Berg Schonenberg was a devoted high school teacher who documented his life experiences and penned hundreds of poems in five languages.

In a volume of poems shared posthumously by his daughter, Mr. Schonenberg reflects on old and new loves and all the complications and joys that accompany relationships as two souls intertwine and attempt to find a way to move forward in life together. Throughout his presentation, Mr. Schonenberg reminds us of the true beauty that lies within the heart and the hope that can be found even during the most challenging of times.

My Father’s Poems -English- Volume I shares poetry penned over a lifetime that provides lyrical insight into all that comprises loving another.

Mr. ROD BERG SCHONENBERG wrote his Life Story -Memoirs-, brought to the USA when he was two months old and very sick, Doctors saved his life, he went to school in Baltimore, MD., attended Augusta Military Academy, Ft. Defiance, VA., as a teenager he was sent to Europe to several private schools, finnaly after many years later, returned to El Salvador with his father, before WWII.
He was a High School teacher of English and French and he did it to a few generations in El Salvador, also he worked as a translator.
On his Poem “THOUGHTS” he wrote:
“I want to lay down a while and rest,
‘cause at work I’ve done my best,
to form better future generations,
for bettering the future of our nation.”
He loved to read any kind of books and on his spare time, thought, wrote and composed Poems and Poems Stories, he wrote about his life experiences in the United States, Europe, El Salvador, Central America and other Countries where he lived or visited.
He moved to United States, he lived with his family and many years later he died in the State Florida.