A Very Special Message at the New Year 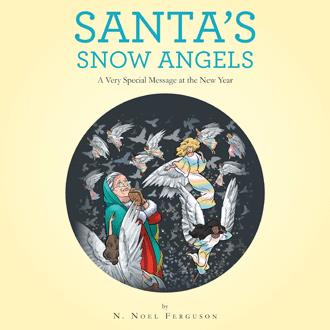 It was December 23rd, and as was tradition on this day, Santa had made his annual trek to One Renegade Road where the most special cottage at the North Pole was located. The cottage sat on the corner of Renegade Road and Poinsettia Place, deep in the heart of Carmelcorn Cove, a cozy village located at the northernmost tip of the North Pole. Carmelcorn Cove was the cookie and candy-making epicenter of the North Pole. Mrs. Claus typically wound-up operations at about this time and headed back to Toyland where Santa’s elves were working diligently at Santa’s workshop to finish toy production. In twenty-four hours exactly it would be Christmas Eve, the most anticipated night of the season. Before leaving though, Mrs. Claus was sure to pack up plenty of her carmelcorn candies and renegade walnuts to share with Santa’s elves and the reindeer. It was especially important to keep them well fed and energized for the most critical hours ahead. In the meantime, there was no better location for Santa to finalize his naughty and nice list - at the cottage was where Santa could do his most profound and important thinking. This year’s list was particularly special because it not only included the names of each child that had been naughty or nice throughout the year, but it also noted something else which was even more important in the grand scheme of the season. For the first time, it listed all of the children who were showing signs of disbelief in Santa. To better understand this, it’s helpful to know that Santa’s list is made possible each year through the magic and magnificence of an ornate snow globe that sits on a corner table in coziest room of the cottage. It was the most special of any snow globe on earth because Santa was able to view the gloriousness of the season well beyond the North Pole by just looking into it. He was able to see all of the fun pre-holiday activities of the many girls and boys as they went about the days leading up to the most exciting holiday of them all, Christmas! One of the most spectacular features of the snow globe was that it would darken when a child had been particularly naughty, and would brighten when one had been notably kind, but otherwise it remained clear offering only the view of the purest and whitest of falling snow. When the snow globe flashed, alternating between dark and light, it signaled that a child was losing belief in Santa Claus. “Ah, let’s see what’s going on today,” Santa said optimistically as he rose from his rocking chair and crossed the room in the direction of the majestical globe. As he scrunched up his nose and peered through his spectacles into the glass, the gently falling snow subsided enabling him to see the world below. Shaking his head in disappointment, Santa grumbled, “What’s this? Naughty Neb is at it again!”

Just as a little boy begins questioning his belief in Santa after a disagreement with an older student at school, Mrs. Claus begins to wonder whether this Christmas might be an utter failure. Everything has gone wrong at Santa’s workshop. In a moment of complete exasperation, Mrs. Claus makes a wish that transforms the story of the North Pole forever. As a new band of helpers arrives to save Christmas, Santa enlists them as ambassadors tasked with delivering a very special message to believers around the world. Santa’s Snow Angels is a delightful tale that reminds all ages that the true spirit of Christmas is about peace, giving, and hope.

N. Noel Ferguson is a mother of two young children. The inspiration for her debut children's book came from her son who was strongly holding on to his belief in Santa despite rumblings among other children that Santa may not be real.