Seven Brave Women Who Shaped the History of the Northwest Mountains 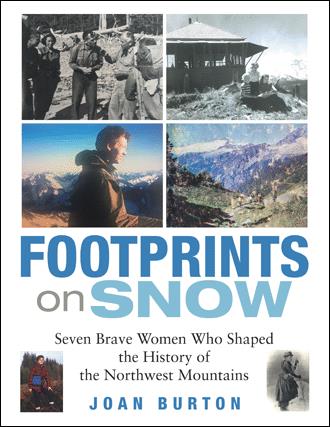 Philemon Van Trump introduced Fay to a party of four men and another woman who planned to conquer Rainier. In August of 1890, no white woman had ever climbed the mountain, and, as far as anyone knew, no person had ever spent the night on the summit. That was the year climbers first realized they could do that, thereby avoiding times of day when falling rock and other dangers are more likely to occur.

The group planned to leave the next morning and camp overnight in the crater at the summit. Fay told them of her dream to climb Mount Rainier too. When they saw how eager she was, they invited her to join them.

Fay was trembling when she told them yes. She wanted to see the sunset and sunrise from the top. What else would she see? Maybe Puget Sound and the Olympic Mountains. Maybe even farther!

She resolved to climb until exhausted. She promised them and herself she would not require help, because if she couldn’t do it on her own, she didn’t deserve to reach the summit. Even if that meant jumping across crevasses, she would try.

Footprints on Snow tells the stories of seven women who were explorers, climbers, conservationists, and a fi re lookout during World War II, when lookouts watched both for fi res, and also for enemy planes. One woman wrote the first hiking guide book before the internet provided driving and hiking directions. Two female climbers were of the first rank in skill, ability, and courage. One made thirty-four first ascents in the North Cascades and British Columbia Coast Range. Another woman helped save remnants of ancient forests in the Olympics and went on to help preserve the scenic North Cascades in a national park. The first woman to climb Mount Rainier was considered daring and immodest in her costume and behavior, but she believed that this brave accomplishment would change her life. Women have sought adventure in the northwestern mountains of the United States and Canada for over one hundred years. They had many obstacles to overcome—including having to wear bloomers— but they all proved that adventure comes in many forms.

Joan Burton is the author of a hiking guide to Northwest mountains, Best Hikes with Children, in print under her name for 30 years. She has hiked and climbed many of the mountains in the Cascades and Olympics, and knew some of the featured women personally. She has camped in the crater of Mount Rainier as did Fay Fuller and saw and felt its steam caves. She wants to tell the stories of the women who made enormous contributions to Northwest mountaineering and conservation because she believes in their heroism and selfless dedication.