An Evil Preacher Tricked My Mother 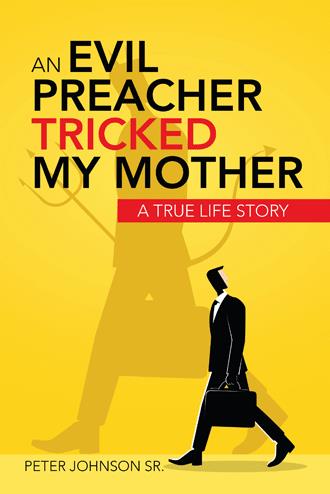 How I Let This Demon into my Family. ]

My mother and big brother told me not to let this man come back. He wanted to date my little sister Banshela when they both were in high school. Banshela was going to Inglewood High. and he was going to Manual Art high. Now in these days in L.A. Inglewood High was a high-class school for Blacks. Famous entertainers kids went there.

Now at Manual Art High, this is a stone ghetto high school. kids getting high, girls getting pregnant, kids killing kids, Gangbangers. you see when I was helping my mother raise my little brothers and sisters, I let my little brothers go to these dangerous ghetto schools. We live in the ghetto. But I was not going to be letting my little sisters get pregnant on me, going to these gangster schools in the ghetto Older boys just take sex from little hot girls..little girls gave it up fast.

And I had 5 yes, five sisters, to raise and look out for, even my big sister Melody I would not let her go out with a teenager Lowriders in Watts unless they took me with them. She use to be mad about it, but she could not have married that Steeler star player brother the Dentist if I had let her get pregnant...Her little pretty light skin ass .those gangsters wanted her, Some I run them off with my knife. and I could fight real good.

This is why Banshela is not going to school with this little demon...I sent all my sisters to school outside the ghetto and sent Billy my brother to Hamilton High to keep an eye on my sister Cassandra. I caught her and her friend ditching school. I was living over there in West LA. by Hamilton High, a mostly white high-class area Still is in 2020. I saw them ditching and I picked them up in my Cadillac. My little sister little high school friend tried to hit on me I laugh and took them right back to school.

I sent my little sister Hope to school in Inglewood, and my little brother and sister Ted and Debra to school in white people land the valley and North Hollywood. Yes, I had my hands full raising all my little brothers and sisters. My mother had a little mental problem, she was scared of the outside world. She never left the house except when I took her to the grocery store. I handle all the business in the family and also made all the decisions for the family. My mother was like a little kid scared of everything.

Now let me tell you why I blame myself for letting this lying, evil, deceitful demon preacher in my family. When we already had one in my family my mother. Boy, could she lie, deceive people. Good thing she stayed locked up, Inside the house. But now and then she gets loose and gives me Hell. She fucked the family up behind my back.

Like I said Banshela was in high school, and some of her friends were getting boyfriends. She want to go on a date, but she did not tell me like she was supposed to do. I guess she thought I would not let her go out with a boy. And I might not have known he went to ghetto Manual Art High. But she talk Clarice her mother into letting her go on this date.

But things didn't go like sneaky Banshela wanted. This little punk ass demon got there all dressed up, in his mother's car. He bring flowers He got into our house the same house this demon will trick my mother out of to steal all the money off it.

So the evil demon was in my house for the first time, he is meeting Banshela's mother Clarice When all of a sudden my brother Eddy come down the stairs The Demon coward saw Eddy...'.He told Banshela You did not tell me Fast Eddy was your brother.."

He got so scared he give or throw the flowers at Banshela's mother then he ran out of the house Ha, Ha. He was supposed to be taking Banshela to the movie. That is what she get always up to no good behind my back.

Well, Banshela was mad as hell [ Where she surely will end up in Ha, Ha ]. She called me telling me that Eddy scared off this boy who was going to take her to the movie..'.'' I said you did not get my permission to go out with a boy" .She said...'.I know, but Mom said I could go as long as she meets him first, to make sure he was not a thug."...

Clarice took the phone from her telling me..'.Peter, you can not let Banshela date this boy. He is a coward...He will run off and leave her to get raped".
Banshela took the phone back still lying and saying' Eddy made him run"..Allen my big brother who lives at home, must have heard them talking to me. So he took the phone from Banshela. In those days Banshela and all the kids respect Allen because he was my enforcer when I was not around. When they all were growing up. Don't forget I am raising some little ghetto kids and got a mentally ill mother I got to look out for and take care of them all.

So Allen told me that Banshela was lying for that coward..'Allen said that Eddy did not say anything to him..Allen said he just saw Eddy and got scared and ran out of the house."..

Banshela heard this and said to Allen .'.Tell Peter I will call him on the upstairs phone".She knew she could not be taking the phone from Allen like she had been doing her mother.

Allen said to me..' Peter, I agree with Clarice our mother. You can not let Banshela date this coward, he would run off and leave her. Allen said he just did it running out our house.."

'I told Allen I know you guys are right."

But little banshela wanted a boyfriend, so she keep after me until '.I said well tell me about this guy; I said you know your mother and big brother is right this dude would run off and leave you stopping at a store in the hood.".It is always someone hanging out in front of the liquor store, most time begging for change.

Banshela said .'.We won't stop at any store in the ghetto".I laugh and said ' you live in the ghetto, and he goes to Manual with our brother Eddy that means he lived in the ghetto too ".

Banshela said .'.Yeah and that's why he was scared of Eddy because he is the big dope dealer at Manual Art High, him and Slick Rick Fast Eddy" best friend. I said ' yeah Fast Eddy is known as the Weedman in our neighborhood "...

Banshela and I laugh.'.She said And Mom is getting on him when some people get in the gate asking for the weedman.".
I said 'Clarice called me telling me...Peter Eddy is let somebody in our yard. Clarice say..Ain't Eddy selling weed for you, Peter?" I tell her That's right How do you think I am paying all your bills and got my apartment?" ' I said All these bills take a lot of money. More than I am making working for the County of LA."

My mother did not mind Eddy selling weed for me. She knew she was not going to work, and I had a lot of little brothers and sisters to take care of...And I promised her that she would never go to jail. That's why Eddy could NOT sell weed out of our house, but only in the alley. Smart right.

Anyway, my mother was fine with this arrangement

Anyway, in the end, Banshela talked me into letting her date the evil coward. But I told her that she would have to keep an eye on a scared boy like he is. Because he is going to school and living scared in the hood. When he gets over there with your high-class friends in their neighborhood, he is going to try to date one of your friends that live over there. then he wants to have to come and run into Fast Eddy...

'Banshela said...You are right I would have to watch him. That makes sense what you said, Peter."

Peter Johnson Sr. shares the stunning story of how an evil preacher tricked his elderly mother out of his inheritance in this autobiography.

The preacher even stole all the money from the sale of the family home, which the author had paid for by working tirelessly since he was a boy.

His mother, however, was not the only person this hateful preacher misguided. As a pastor to Hollywood stars, he preyed on so many people. He never shared any of his spoils.

The author also recalls getting shot up twice in mean streets and navigating suicide, treachery, and deceit—as well as the challenges of growing up Black.

Join the author as he looks back at a life filled with wins, losses, and lots of surprises in An Evil Preacher Tricked My Mother.

Peter Johnson Sr. was a hard worker as a boy and bought his family a house at age sixteen before having to drop out of school to take care of his mentally ill mother. He raised seven siblings, paid all the household bills, and then had to face an evil preacher who turned his mother against him.