The Founders of the Black Star Photo Agency 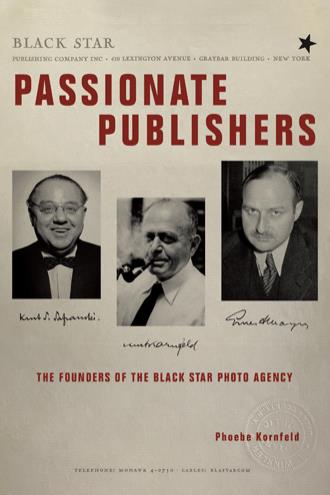 Mayer, Safranski, and Kornfeld were all active in the maelstrom of life in interwar Berlin where they started families and forged careers in the often challenging and difficult socioeconomic environment of Weimar Germany. That story is told in Chapter III of this book, and the chronology in appendix I provides an overview of important milestones in their lives.
The three men considered themselves to be German, but they quickly understood the need to leave the country of their birth upon Hitler’s rise to power in 1933. Some of the first steps taken to crush democracy in the Third Reich involved destroying freedom of the press in the country. On account of their Jewish heritage, no matter how assimilated the men were into German culture, their roles in the publishing industry were eliminated by the National Socialist focus on turning the country into a racially “pure” Aryan nation. Anti-Nazi convictions and the desire to move their families out of harm’s way propelled the three men forward. The disdain they felt for Hitler and the Nazis remained visceral for the rest of their lives.
Clear-thinking men, willing and able to make tough decisions and to act quickly, Black Star’s founders were also able to build long-lasting partnerships. Each of these attributes would be important to their success and to their survival, and the question these men quickly asked themselves was not whether to leave Berlin but where to go. Well advanced in their careers, the men sought a destination where they would have the best chance of landing on their feet professionally and preserving that which was of most value to them. They focused on protecting their families, their integrity, and their books.
London and New York were thought to be the most likely places where these refugees could hit the ground running. They explored both possibilities while at the same time packing up their households in preparation for the departure from Germany. In the face of the need to uproot themselves and their families, the men turned the situation on its head. They seized the opportunity to collaboratively create an innovative business that would significantly contribute to their common field of interest in publishing and the use of photographs in the print media.
The paths of the three men had initially intersected at different times during the early decades of the twentieth century. They had come to know each other well enough that they were willing to temper their differences to form a partnership as they began their new lives as refugee-émigrés. In December 1935 they established Black Star Publishing Company in New York.
As a photo agency, Black Star became instrumental in bringing images of life around the world into the living rooms of many across America in the era preceding the age of television. One aspect of the work was collaboration with many magazine and newspaper editors, including those at Time, Life, Look, National Geographic, the Saturday Evening Post, the New York Times Sunday Magazine, and Parade. Despite their noticeable accents, the three men rather easily managed to make themselves understood thanks to the force of their intellect, character, and personality. Howard Chapnick, who worked closely with the Black Star founders for many years, referred to Safranski as a “brilliant theoretician,” Kornfeld as “gregarious, ebullient, and full of continental charm,” and Mayer as having “a keen business mind” and “a Renaissance intellect with little tolerance for the superficial.”
Black Star’s founders built a reputation for supplying photographs and photo stories relating to breaking news and the history behind it. This entailed both support for promising photographers and persistent advocacy on their behalf vis-à-vis the editors of magazines and newspapers. Mayer, Safranski, and Kornfeld championed the philosophy that the combination of multiple quality photographs and informed text can be a most effective means of conveying the news to a wide audience. They understood that photojournalism could communicate a whole greater than the sum of the parts. Similarly, the combination of their strengths in the Black Star partnership accomplished more than any one of them could have achieved on his own in the circumstances they faced during such difficult times.

Passionate Publishers traces the lives of the German Jewish refugee-émigré founders of the Black Star photo agency—Ernest Mayer, Kurt Safranski, and Kurt Kornfeld—whose expertise helped ignite a revolution in photojournalism.
The first half of the book lays the groundwork for understanding how Black Star’s founders could play such a key role in photojournalism. The author reconstructs their history in Germany before and during World War I and details their accomplishments in Berlin’s dynamic Weimar-era publishing industry.
The journey into exile of Safranski, Mayer, and Kornfeld, their influence on the editors of Life, the first decade of Black Star, and the most notable post-World War II experiences of the photo agency’s founders are the focus of the second half of the book.
Family and governmental archives provide extensive new information about the three men and reveal harrowing investigations by J. Edgar Hoover’s FBI, which believed Black Star’s founders to be spies or agents of a foreign government. The author argues that the refugee-émigrés successfully contested the never substantiated allegations on account of their strong views relating to the freedom of the press and the malevolence of discrimination on the basis of race, religion, or national origin.

Phoebe Kornfeld is a retired international lawyer and a granddaughter of Black Star cofounder Kurt Kornfeld. She received her Bachelor of Arts in government and German from St. Lawrence University in Canton, New York. Her PhD in political science is from Duke University, and her Juris Doctor degree is from Duke University School of Law. She subsequently conducted legal research in Berlin with a German Chancellor Fellowship from the Alexander von Humboldt Foundation.