Girls, Crimes, and the Ruling Body 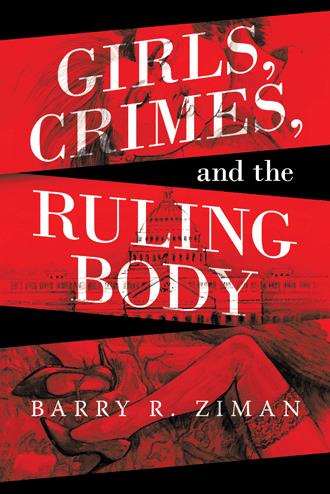 After his hotel rendezvous, Ryan retrieved his car from work and then drove home through the rain. It started drizzling as he left the hotel, but now the rain was fierce and, despite the vigorous sweeping arc of his wipers, obscured his vision and the dark road ahead. He was pushing the speed limit so that at times he sensed he was losing control of the car; a feeling that seemed to manifest his sense of the moment. When he was three blocks away from home, he looked at the dashboard’s digital clock that read 11:40 p.m. He figured that anything past midnight was unequivocally suspect, downright incriminating.

In his mind he could rationalize his infidelity by the loss of passion in his marriage. Nevertheless, he needed to maintain a cool facade of fidelity and exercise prudent discretion to avoid the inevitable crash that would occur. Undetected infidelity was like driving above the speed limit, Ryan thought; unchallenged it provided a great high, a pulse-pounding sense of sensual excitement, but a crash would bring sudden scrutiny, if not conclusive catastrophe.

He noticed the minivan as he turned onto his block. There was nothing overtly alarming, except that it was rare and suspicious to see a car parked in front of his house this time of night. He then noticed, in the glare of his headlights, that the rear license plate seemed obliterated, illegible. He had the instinctive sense that the van was trouble. He swung his car into the driveway and noticed that the garage door was fully up. Through the rain, his car’s headlights illuminated the garage. Annie’s car was parked, seemingly undisturbed. Ryan could not see any movement. He opened his car door, and the violent roar of rain filled the air. Leaving the headlights on and motor running, he stepped out of the car and was immediately drenched by the cold storm shower. He walked slowly, apprehensively, toward the garage. The garage light was off.

For a moment he stood in front of the open headlight illuminated garage and could see no movement and nothing amiss except for the fact that the door was up. Could Annie have inadvertently left the garage door up, he wondered. He looked around. The nearby gutters off the roof gushed rain like an open spigot, flooding the driveway and lawn. Rather than enter through the garage, he decided to approach through the front door. Under the shelter of his front entrance, he pulled his house keys from his pocket, but they clumsily slipped through his wet hands. Quickly, he retrieved the fallen keys and then opened the door.

The house was dark and quiet and still. He left the front door open. He put his house keys and phone down on the entry table. His hair was wet, and he wiped the water from his eyes. His mind began to flash vivid unknown horrors. He turned on a light and called out loud, “Annie. Annie.” No sound issued back. He called again: “Annie, Jessica.”

He bolted up the stairs, and some instinct pulled him first to Jessica’s room. He turned left at the top of the stairs. Jessica’s door was open and her light was on. Entering her room, he immediately saw the child’s bed empty and her cover sprawled on the floor. Then he heard what he thought to be the front door slam loudly. Outside, he could hear the grinding sound of a car engine being started. The sound of the engine energized him, like a starter’s pistol, so that he bolted back down the stairs, pulled open the front door, and dashed out into the storm.

He heard the screech of tires before he saw the minivan swerving in a semicircle in front of his house. A strong gust of wind blasted rain into his face, and he screamed Jessica’s name. He had only a few seconds to choose between going back for his cell phone or giving chase. His car was to his immediate right, lights still on and engine beckoning.

Splashing through the marshy grass, he raced for his car. He slammed the door shut, shifted into reverse, and careened out into the street. He depressed the accelerator and sped after the van. The rain was thick as a curtain, obscuring his vision. Ryan cursed the fact that he did not have a phone in his car and began to second-guess his decision not to call the police immediately. Speeding through three intersections, he ignored the stop signs when at the fourth one he thought he could discern the red taillight configuration of the van. Quickly, he turned the car left in pursuit.

The van appeared to be traveling at a normal rate of speed as Ryan’s car closed the gap between them. Perhaps this was not the right car, he thought. He was cursing out loud and pounding the wheel in frustration. If he had chased the wrong car he was wasting precious time and his stepdaughter was slipping away into some inconceivable horror. He was directly behind the minivan when it sped through a red light, and Ryan knew then that this was the car.

The road was mostly empty, and the two cars accelerated through several red lights. Suddenly, the van lurched right and accelerated again, fleeing onto a highway entrance ramp. It flew onto the dark highway with the speed of a night creature, the bright red eyes of its taillights only visible.

Concentrating on not losing control of his car, Ryan followed blindly and soon both vehicles were racing at high speed on Potomac Highway. The two-lane highway traversed public parkland for miles without an exit. He hoped that the police were stationed at their usual checkpoints. The two vehicles had the rain-swept road to themselves. Checking the speedometer, he saw he was pushing eighty-five. The bright beam of his headlights kept a steady fix on the van. If he kept up the chase, maybe a police cruiser would intercept them for speeding.

A legislative intern with secrets that could unravel the governing elite vanishes into the night in Albany, New York. Seven years later, another young woman disappears in a suburb of the nation’s Capital. The only connection between both missing women is Ryan McNeil, the chief of staff to a rising congressman.

Under suspicion, Ryan must now prove his innocence in these women’s abductions, but in the ruthless world of politics—where the line between crime and lawful authority blurs—there is no one he can trust. With his life at stake, Ryan confronts the elaborate lies of his lover, his wife, and his political mentor to uncover the identities of a murderer and manipulator.

While Ryan tries desperately to maintain his relationship with his wife and stepdaughter, the desires and deceits of those around him undermine his family and also the integrity of government. Innocent of murder, but implicated in this political world of deception, Ryan discovers the only truth is power.

“... the pace of the story is consistently propulsive throughout, which is sure to maintain readers’ interest.”

Barry R. Ziman started his career as a Director of Legislation in New York State in the 1980s. In the 90s, he became a lobbyist first in New York City and later in Washington, DC. He is a graduate of the Bronx High School of Science and the State University of New York College at Oneonta.