SNAP OUT OF IT

An Unexpected Caregiver’s Way to Self-care, Stability, and Survival 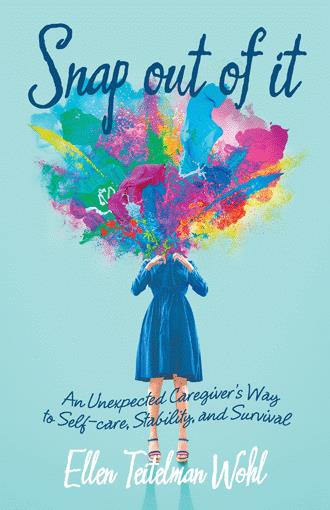 While we hunkered down at home, waiting to schedule the next round of appointments, Jack’s short-term memory grew even worse. His confusion and lack of concentration really scared me. I was not prepared mentally or physically to deal with dementia. At last, the call came in to schedule a preliminary appointment with the neurosurgeon. Matter-of-factly, the scheduler said “Let’s see, the first available date is October 25th. Does that work for you?” “But that’s over three months away” I said, struggling to catch my breath “Yes, that’s the first available,” she repeated in a sing-song voice as if this were part of her everyday routine. I couldn’t hide my frustration and started crying. “Please, you don’t understand. He can’t live like this. I can’t take care of him.” I begged with the scheduler to find a closer date. “Well, I can put him on a standby list in case there’s a cancelation. It might get him in sooner,” she said, “but it’s doubtful.” I tried to stifle my tears all evening. We’d been living in limbo for almost two years. Jack was a mess, and I just didn’t have the strength to keep this up. The finish line that I thought was in reach was jerked away again. I still wouldn’t tell anyone how I was feeling. What did I expect them to do anyway? I certainly didn’t want anyone to say “Cheer up.” I didn’t want anyone to say, “Look on the bright side,” or “Oh c’mon, it can’t be that bad.” I didn’t want anyone to tell me how I should be feeling. How I felt was up to me. The one person who I could normally lean on was sitting on the couch in a stupor, staring off into space. A few days later, I shook off my defeatist attitude and frantically tried to think of someone with connections at the Cleveland Clinic. Our good friend Mark came to mind. I knew if anyone had enough clout to get Jack in sooner, it was Mark. I had done a lot for him over the years, Mark loved Jack and me, so he was happy to help. He explained that his doctor appointments were scheduled by something called concierge services. He gave me the phone number to call, and said to use his name. When I did, the agent running this exclusive program jumped into action, requesting all Jack’s information. She couldn’t promise anything, but she’d try to move up his appointment. I had a moment of hope, then waited patiently. For several weeks. I knew all about waiting. Whether flying around the country on a business trip or traveling with Jack and the kids on vacation, there’s no more helpless feeling than being stuck in an airport during a flight delay or onboard the plane for an endless holdup on the tarmac waiting to take off. We encountered the same helpless feeling while in a holding pattern at home. Waiting for tests. Waiting for surgery. In fact, there were times when the wait felt worse than the illness. We needed to stay occupied and maintain some sort of routine. We were so close to the finish line and wanted to cross it in one piece. * * * SNAP Life has always been a game for Jack. When he studied elementary education at Kent State University, he made up great learning games for his students. He still talks about his masterpiece, Math-o-poly. I used to like games. Trivial Pursuit, Boggle, Facts in Five. Games that made me think. I don’t enjoy “roll the dice” games. Maybe it’s because Jack and the kids are so competitive. During a heated game of Life, nine-year-old Lindsay got so frustrated she flipped the board and said, “I quit.” And forget about Monopoly. Jack memorized the board. When he rolls the dice, he knows exactly where to move his racing car. If he’s challenged, he counts it out and is always right. In general, I’m just not good at games, but I’m happy to play along just to be sociable or to pass the time. Having “Game Night” with another couple turned out to be a pleasant, low-key way to get together. Our friends Ava and David re-introduced us to Rummikub. It’s a game our moms played forty years ago. Because it’s a tile game, it was perfect to play outdoors on a summer night. If there was a breeze or a hurricane, nothing blew away! Rummikub takes only limited concentration unless we are playing a cutthroat game which, in Jack’s case, uses intense strategy. I don’t know how his brain still figured out all the number combinations. But it did. Jack is a natural at poker, gin, or any game of cards. (I think it’s genetic because his grandmother ran neighborhood poker games during the depression, and repeatedly won.) Our grandchildren love to play with him. Reese looked like a little card shark bringing her deck of Crazy Eights to the rehab hospital. Addy’s game is Uno. The fast-moving card game keeps us laughing as the cards send the game in different directions. Once again, my Jack-of-all-trades can beat anyone at any game. His brain works in mysterious ways. I certainly can’t explain how he dominates every game. He repeatedly defeats everyone we know in Words with Friends, an online word game. (It got to the point that friends won’t play with him, so he plays Words with Strangers.) Playing games was a remarkable distraction when we needed it most. Then it took Jack all the way through recovery. Games and puzzles helped build memory skills. In the beginning of rehab, it took him several days to complete one Word Search puzzle. In a matter of weeks, he was zipping through one a day, then two, or three a day. Relaxation and rehabilitation. Who knew it was all a game?

In Snap Out of It: An Unexpected Caregivers Way to Self-Care, Stability, and Survival, author Ellen Teitelman Wohl shares her honest, emotional — sometimes funny — memoir of the continuing struggle to keep life whole while her husband Jack’s health falls apart, over and over again: bipolar disorder, coronary artery disease, lung cancer, diabetes, and normal pressure hydrocephalus, among other medical conditions. While Jack has a remarkable team of doctors treating him, Ellen only has herself to rely on. As the unexpected caregiver, she deals with anxiety, frustration, and exhaustion day after day. She thinks something is wrong with her, but she eventually learns that caregiver burnout is real. Her inner-strength and resilience emerge through the personal discovery of “snap out of it” relief routines, self-care concepts, and ideas. The “snaps,” interspersed throughout the narrative, share light-hearted stories, personal experiences, and techniques that form the basis of her mental getaways that include cooking, gardening, reading, exercising, laughing, and more. Ellen finally discovers support groups and guidance, which she shares in this memoir. Her curated resource guide leads you to websites, apps, and support groups dedicated to caregivers.

Ellen Wohl’s interest in wellness and self-care began when she was losing herself while helping her husband Jack recuperate from myriad illnesses. She thought something was wrong with her, only to discover that Caregiver Burnout is normal. By speaking with other unexpected caregivers, she knew they all needed a breather. Always a writer, Wohl began her professional career partnering with Grammy-nominated adult contemporary solo piano artist Jim Brickman. For fifteen years, she teamed up on award-winning advertising campaigns by creating and producing commercial jingles in Chicago, New York, and Cleveland. Subsequently, she jumped to the music industry, writing lyrics to many of Brickman’s popular songs. A contributing writer to Brickman’s “Soothe” campaign, Wohl wrote weekly blog posts with advice on bringing calm to a chaotic world. Ellen is a frequent guest on the syndicated Jim Brickman Radio Show, providing quirky life lessons. Ellen lives in Cleveland, Ohio, with her husband Jack. She enjoys daily laughs with her children and six grandchildren.