The Biography of Clara Fuller and Her Colonial Ancestors, 1875–1638 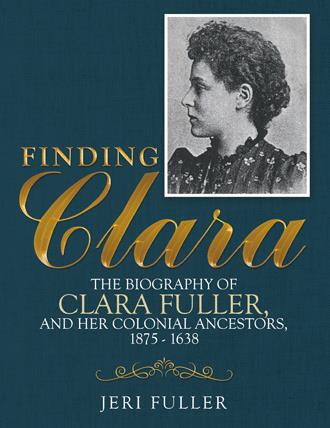 The Minnesota Historical Society building was huge, beautiful, and impressive with its large dome. It is located on Kellogg Boulevard, named after Frank B. Kellogg, who was the U.S. Secretary of State from 1925 - 1929. His most important achievement was the Kellogg-Briand Pact of 1928, a multi-lateral agreement designed to prohibit war, as an instrument of national policy. Frank was awarded the Nobel Prize for Peace in 1929.

The Historical Society was situated, between Minnesota's State Capital building and St. Paul's Cathedral. Upon entering through large glass doors, at the Minnesota's Historical Society, there was a plaque by Rhoda R. Gilman, a member of the History Center Planning Committee from 1987. It read: "We have envisioned a place that draws the public in, fires the imagination, and responds to its hunger for an understanding of the past."

This was just the place I needed to be, to further my family research. Walking past the plaque and onto the marble floor, I found myself looking around in awe at the beautiful interior. I was drawn to the center of the colonnade; it was capped by a beautiful dome. The panorama of the State Capitol building from the window was spectacular. From another enormous window; I took in the outstanding vista of St. Paul's Cathedral.

I signed in at the Research Center and deposited my articles into a secured locker. My genealogical research journey began, back into the 1800s. It started with a tour of the facility, which included the voluminous library, and the extensive microfilm room. Available to the public, were state-of-the-art computers, microfilm readers, copiers, and professional staff to assist you in any way possible.

Having performed genealogical research for over twenty years, by 1997; I learned of a great way of tracking the genealogical data I was collecting. I developed a genealogical research tracker tool to help identify these discoveries. I called the document, my "Research, Wish List." It allows me to track the who, when, and where of confirmed appointments, and the data to be collected. While, also identifying what material, I am wishing or hoping to collect.

This document allows me to record the Expected and Unexpected genealogical items gathered. For my get-up, get-personal 10-day genealogical research trip to Minnesota, I had prepared my "Research, Wish List," spreadsheet. It would help me to track the genealogical material I "Expected" to discover about my family. As well as, any "Unexpected" information or items. These unexpected items could be delightful surprises, or rare finds, additional leads, additional histories, books, photographs, etc. about my family's history.

Today, I was concentrating to obtain information on my paternal great-grandfather, Charles Emery Fuller. I had begun my genealogical research on our Fuller branches, years earlier. I had a vast collection of vital records, numerous obituaries, as well as additional family history from letters I received from relatives. I came armed with an outline of Charles' life, his two wives, six offspring, and my "Research Wish List," From my previous searches, I discovered Charles had served in the Civil War, as a Union soldier. I was ready to confirm my findings and discover new information about his Civil War experience.

My earlier reading convinced me, that the history and books at Minnesota's State Historical Society Center would greatly increase my knowledge on Minnesotas participation in the Civil War and more on Charles involvement. Asking for assistance, the researcher directed me to an Index of Minnesota's Civil War Veterans by name.

The American Civil War began on April 12, 1861, ending on May 10, 1865. The war involved the northern states loyal to the Union, against the southern states, seven of which had seceded from the Union, to form the Confederate states. The civil war began primarily, to determine if the United States was to be a dissolvable confederation of sovereign states; Or to be an individual nation with a sovereign national government.

Under the Constitution, all men were created equal and all men had the right to liberty. The enslavement of peoples who were being denied the right to liberty prompted the 16th President of the United States of America, Abraham Lincoln, to issue an executive order producing the Emancipation Proclamation, on September 22, 1862. This proclamation was to abolish slavery and involuntary servitude. President Abraham Lincoln would pay with his life, for the freedoms of others, when he was assassinated on April 14, 1865, just a month, before the war ended.

One set of numbers referenced a book recording the solder's personal information. The "First Regiment of Heavy Artillery, Company I" was the company Charles was assigned. This book contained a roster, listing every volunteer by the last name, then the first name, and middle initial, if one was given. This list also included the age of each volunteer. This was the way I was able to identify this Fuller, Charles E. (E. is for Emery) to be my ancestor, because he was eighteen years old, which matched his age reported on the roster. Charles was the right age, and there were no other soldiers by that name.

The officers were listed first for each regiment. The ages of enlisted men and officers ranged from 18 to 44 years old. I asked a research assistant if the ages for these soldiers were typical for the war. He said yes, but by the end of the war, the age range was much more extreme, especially in the south. This regiment was typical, for Union soldiers participating in the Civil War.

The date each soldier enlisted into the war was referred to as "Mustered In" and "Mustered Out" dates recorded the date; they were discharged or left the service. I discovered that Fuller, Charles E. mustered in on January 10, 1865, and mustered out on September 27, 1865. He served a little over nine months. Charles was nineteen, when he returned home to Minnesota, from the Civil War.

The "Remarks" column next to each soldier, provides additional information about what happened to each man. This information included the dates of early discharge, transfers to other companies, and promotions within the company. In the event of death, the date, place, and on what battlefield was identified.

The second set of numbers next to Charles' name was an account of the First Regiment of Heavy Artillerys activities recorded in, "Minnesota in the Civil and Indian Wars 1861 - 1865." This account would record the battles and participation of my great-grandfather. Prepared and published under the supervision of The Board of Commissions, appointed by the act of the legislature of Minnesota of April 16, 1889. Lieutenant and Adjutant James J. Egan recorded this history as a "Narrative of the First Regiment of Heavy Artillery." The Garrison of the Republic, G.A.R. was made up of regiments. The First Regiment Heavy Artillery was comprised of 12 companies. Each company was made up of 144 men.

The one thing I knew for sure was, the more family history I found, the more I knew there was more to find!

The question was asked if our ancestors came from England on the Mayflower. I answered no, “Our English ancestors sailed into Cambridge Harbor, Massachusetts in 1638, instead!”
Finding Clara is a result of a single genealogical lead, that became a family mystery in 1972. Jeri Fuller’s great-grandfather, Charles Emery Fuller and first wife, Martha had a daughter named Clara in 1875. She was born in Northfield, Minnesota. My mother did not know that he had been previously married, because there was no family history, stories or photos handed down of Clara or her mother.
Jeri solved the mystery of finding Clara, old school, by writing to relatives and obtaining copies of vital records. She provides intimate details of Clara’s life, where she lived, attended college, who she married and her children, after she traveled to Northfield in 1997.
Her get-up and get-personal research method gets results. While completing Clara’s biography she found that Charles Emery Fuller had served in the Civil War. She tells where she obtained a copy of his mustered-in and mustered-out record and the narrative of where his regiment served.
Finding Clara reveals the discovery of numerous Fuller family connections to Northfield’s unique history. One ancestor witnessed Northfield’s famous attempted robbery of the First National Bank by Frank and Jesse James and the Younger Brothers in 1876. Some ancestors served as volunteer fire fighters for Northfield’s Hook and Ladder No. 1, some attended either Carleton or St. Olaf College. The connections of her family to these places and events are amazing.
Jeri recounts her Fuller family history, alongside America’s history from colonial New England to the eighteenth-century in the Mid-West. She tells of how Chauncey C. Olin supported the Underground Railroad in Wisconsin. She goes on to solve seven family history mysteries. Using the strategy of her family’s naming convention, she identified her Violet Barber who was born in 1796. Her inspiring stories of tenacity and perseverance are insightful.
Her research located her family’s American Revolutionary Soldier, who moved to Canton, New York in the early 1800s. She includes eleven generations of her Fuller family tree. The staff at the Flint Public Library in Middleton, Massachusetts provided a map locating Thomas Fuller’s home built in 1684. These stories in Finding Clara can assist any novice or expert genealogist find inspiration to complete their family histories.

A genealogist and family historian of forty-years, Jeri Fuller began tracing her family tree in 1972, when there was no internet or online databases. Her success comes from preforming family research first-hand at the local level across the country, in the towns where her ancestors lived. She documented over three-hundred-eighty years of her family’s history, unfolding alongside America’s history. She developed some great what-if strategies, which allowed her to break through some brick walls, solving over seven family history mysteries, identifying her ancestors back eleven generations to Cambridge, Massachusetts to 1638. Jeri’s first book, Finding Clara, is the result of an arduous labor of love, curiosity, and dedication.