Important Sales and Leadership Lessons I Learned as a Kid 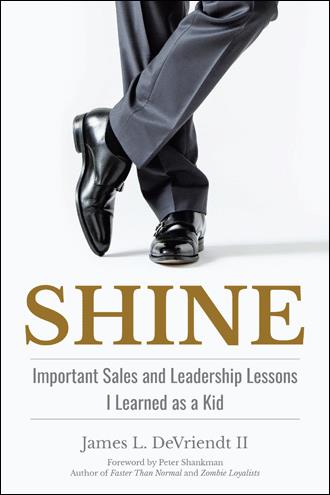 SHINE Important Sales and other Leadership Lessons I Learned as a Kid introduces readers to some valuable foundational life and business lessons, most of which the author learned as a child growing up in Grayling, Michigan. These insightful principles can be used to strengthen sales and leadership results or for improving the success of any career.

James DeVriendt has a BA in management with a focus on Leadership. He is currently working on obtaining his master’s degree in Healthcare Administration (MHA) at the University of Michigan-Flint. James is a combat Marine Veteran and has over 20 years sales experience, 15 years of which have been in a leadership capacity. He has spent much of his career developing sales strategies for fortune 100 and 500 companies. James and his wife have been married for 17 years and are the proud parents of three children. They currently reside in Lakewood Ranch, Florida and some hobbies enjoyed by James and his family are traveling, the outdoors, swimming, biking, running, and youth hockey. Writing is a passion James has recently embraced to share his knowledge and experience. Shine: Important Sales (and other Leadership) Lessons I Learned as a Kid is his first published book and he is working on completing his second.