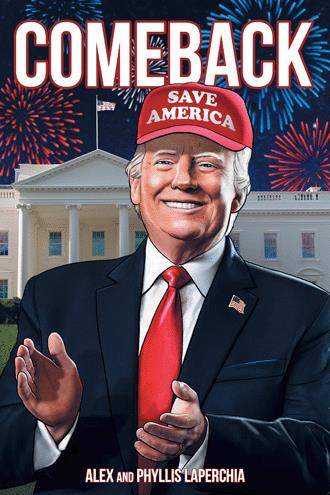 "Comeback" details how former President Donald Trump is called by God to save America from being destroyed by twin evil forces, socialism and communism. Spiritually, socialism is the replacement of God by government, and communism is the replacement of faith in God by atheism. Love of God is necessary because God is love and people who abide in love abide in God and God lives in them. This reality is confirmed in The Bible. To live a love-filled life is to be God-filled. Read The First Letter of the Apostle John: Chapter Four, Verse Sixteen.

Donald Trump is persecuted by Satan and his disciples, who are evil people. These evil persons have been in the world from its beginning. Evil Cain murdered his innocent brother, Abel. The antichrist Hitler annihilated six million Jews. The list of antichrists is long: Roman emperors, tyrants like Stalin and Mao Zedong, and now Xi Jinping who wants to rule the world.

America’s youth are attracted to socialism because sixty-five multi-billionaires own half the world’s wealth (the bottom half). This is not only unfair, it is evil. The founding fathers espoused lofty principles in the Bill of Rights and Constitution – except for black people. The founding fathers were wealthy aristocrats who owned slaves. The black slaves were not considered human but beasts of burden. Thank God today the words “all men are created equal” is a reality recognized in law.

In the near future, China will start nuclear WWIII by attacking Japan with nuclear weapons. Japan will be decimated; the U.S. will not honor its agreement to defend Japan signed after WWII. The United States is no longer the world’s sole superpower. Unless Donald Trump is reelected president in 2024, our country will be run by progressives, socialists, and communists, AKA the Democrats. They will hold the levers of power in a one-party rule. The United States continues to decline morally with increased crime, drug abuse, and domestic violence. Our system of democracy and free enterprise will cease to exist. The United States is on the verge of becoming a socialist country, a precursor of a communist country.

If Donald Trump does not win the 2024 presidential election, then Communist China will be the sole hegemon. The words of the eminent Chinese philosopher, Confucius, will ring true: “There can only be one sun in the sky.” China will be dominant in world affairs. There will be no United States. China’s Communist Party (CCP) will exert its authority throughout the world. All ethnicities, cultures, religions et al will pledge allegiance to the Chinese Communist Party (CCP) with its president for life, Xi Jinping, and all his successors.

Do you believe we could be on the verge on WW III? The intent of the authors is to warn the reader of impending events that will be devastating to humankind - that is unless people turn to God and away from evil. This prophecy is evidenced in the Holy Bible, the Word of God. For God will not allow our horrendous violence and moral depravity to go unpunished. God’s justice demands the global plagues the world is experiencing and the forthcoming Great Tribulation, nuclear WW III.

Do you believe that Donald Trump will be our 47th president? Some Orthodox rabbis in Israel, including Rabbi Yoseph Berger, who oversees King David’s Tomb, predicted that Donald Trump would be victorious in the 2016 presidential election despite fierce opposition from the left wing Democrats. These rabbis determined that Trump’s name in the gematria-Jewish numerology signifies equality with the gematria of the title: “Messiah for the House of David”. These rabbis believe that Trump’s election was the will of God.

The authors believe the rabbis are right. Alex and Phyllis posit that Donald Trump is not the Messiah but is a forerunner of the coming Messiah. He will be re-elected in 2024.

What’s it all about? I want my country Back!

This book also addresses issues and topics current today - Afghanistan, Immigration, COVID, Education and Democrats vs Republicans. This is all in view of the disaster of the Biden Administration and the success and accomplishments of the Trump Administration.

Teaching is Alex LaPerchia’s vocation—writing his avocation. He has a Bachelor of Science degree from Fordham University and a Master of Arts degree from Long Island University. As an English teacher in NYC public high school and adjunct professor in college, he believes in inculcating moral values as well as teaching subject matter. He asseverates that the war against drug abuse, violence, and criminality must be fought in the classroom through lessons and discussions.

Alex maintains that he has undergone a spiritual evolution from cynic to a loving Christian who has turned his life over to God. This turnabout is clearly evident in his writings which are rooted in his fascination with the lives of saints who have sought and attained communion with other persons and with God. In addition, Alex had a street ministry on 6th Avenue in Manhattan, NYC, praying with homeless people and providing them with money to purchase a simple lunch.

Both Alex and Phyllis worked with the homeless through the Missionaries of Charity (Saint Mother Teresa of Calcutta’s Organization) in the Bronx and Harlem.

Phyllis LaPerchia was a principal of one of the largest middle schools in NYC (2200 students)--I.S. 61. She has a Master’s Degree in Special Education and a Master’s Degree in Business Administration. Phyllis started as an assistant teacher and worked her way up to the position of principal. During her years as Principal she won awards for the special programs she started to improve the students’ lives-Principal of the Year awarded by Mayor Guiliani for the first inclusion program in NYC. This program was visited by teachers throughout the United States and international countries, and included a visit by the Assistant Secretary of Education of the United States. Awarded by President Clinton in the Rose Garden, School of the Year representing N.Y.S., for drug free program. Received while an Assistant Principal at Jane Addams High School, Assistant Principal of the Year for the Retail Academy, a school to work program. Several news stations around the country covered this program and Donald Trump sent a letter of congratulations!

Both Alex and Phyllis worked with homeless through the Missionaries of Charity (Saint Mother Teresa of Calcutta’s Organization) in the Bronx and Harlem.