The Inspiring Story of Auburn University’s Unbelievable, Unforgettable and Utterly Amazin’ 1972 Football Team, Then and Now 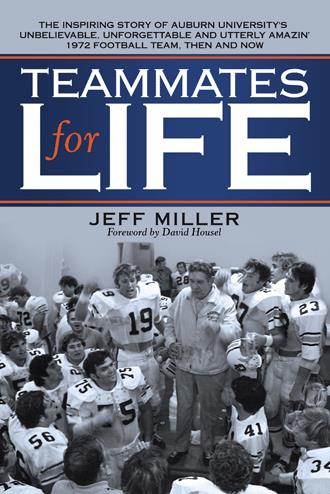 On the Auburn sideline, players either believed the seemingly impossible could happen a second consecutive time or somewhat talked themselves into hoping it could happen again. "Get it, guys! Get it!" Terry Henley yelled. Mike Gates and Rusty Fuller stood on a bench, hoping to get a better view of Alabama's next punt. "Wouldn't it be neat if they blocked it again," Gates said. "No shit," Fuller answered.

In the Tigers' huddle, an excited-but-winded Bill Newton informed his teammates that someone else would have to block the next punt instead of him.

As Roger Mitchell and David Langner took their positions on the ends of Auburn's front line again, Mitchell thought he saw Alabama's Steve Bisceglia scoot over just slightly in his direction. Mitchell would again be the outside man going after the punter. Punter Greg Gantt moved up as he was told, standing just beyond Bama's 31 with his arms extended, but it didn't appear he shortened his approach.

Center Mike Raines snapped again, and the ensuing sequence of events nearly replicated the previous block. Newton had the same open lane in which to rush. Bisceglia was faced with a split-second decision as Newton, Mitchell and Ken Bernich all crashed in from slightly different directions around him. He chose to address the players to his right, Mitchell and Bernich. Bisceglia successfully lifted Mitchell high into the air. That left Newton to dive across the space directly in front of Gantt again, at Bama's 35, with Bernich directly behind him. Newton was convinced after taking two steps that he'd block that punt, too. He did so that time with his arms. Mike Neel, yards behind the action, was primarily struck by the sudden quiet that he perceived from the capacity crowd, as if all 72,000-plus fans suddenly gasped as the play amazingly unfolded as a veritable replay. Neel was sure he heard the sound of the ball striking Newton.

The ball bounced and then bounced a second time before being grabbed by Langner at about arm's length just beyond the 25. Gantt remained on his feet as Langner ran past him to his left, and the Alabama punter began a futile pursuit from a cold start. Langner sped into the end zone at a faster pace than he'd previously run, moving into the stadium shadows as he raced past the 5.

Langner crossed the goal line and curled to his left, extending his right arm with the ball in his hand and pumped it a few times before crossing the back line of the end zone near the security fence, only seconds before he was swarmed by ecstatic teammates. As Newton came off the field, he found himself as the unlikely recipient of a bear hug from manager David Storey, all 165 pounds of him, though Storey didn't know Newton had also made the second block. Didn't matter. Harry Unger, who hadn't played for weeks because of his bad knee, couldn't help but jump around the field in absolute joy. If he fell, he wasn't sure he could get up. Ted Smith, who hadn't played a down since injuring a leg on the first day of spring practice eight months earlier, heaved his helmet high in the air, and it almost hit someone upon returning to Earth.

Yes, the score was 16-16, requiring an extra-point kick from Gardner Jett to give Auburn, a 16-point underdog, the implausible lead. Routine, certainly – except that Mitchell did block the PAT after Alabama's first touchdown and long snaps had twice been an issue for Auburn that afternoon. For the first time that day, Jett wasn't holding his kicking tee when it was time for him to kick. He had it when the first punt was blocked. Jett frantically searched the bench area for a period of seconds that to him felt like hours before Joe Tanory, fellow kicker and occasional prankster, produced the tee and said, "I think I can be the hero instead of you. How much is it worth to you?"

Jett, in no position to negotiate, grabbed the tee and jogged onto the field in a rather business-like manner. As the Auburn players huddled, holder Dave Beck was edgy given what he was required to do to control the snap on the previous PAT. Henley, always the jokester, was the improbable voice of reason and urged his teammates to remain calm and particularly don't mess with Jett. Which lineman Jay Casey did just then. Getting in the elfin kicker's face, Casey said, "You won't have to worry about a ride back to Auburn if you miss this kick 'cause I'll kick your ass all the way home." So noted.

Some Alabama players on the sideline intently watched as Beck settled into his holding stance and Jett measured off his steps. Some of them didn't, instead sitting on the bench, not looking, apparently waiting for the Legion Field throng – half delirious, half despondent – to inform them of the outcome. Sanders informed the Auburn radio audience: "Snap! … Kick! … Good! (Cue the screaming in the booth again.) Good! With time out on the field, the score is Auburn 17 … Alabama 16!" One of the Tide players on the field told Jett his kick wasn't very good. So what? Atypically, the little kicker's route off the field wasn't straight for his sideline. He ran back toward the middle of the field, slightly toward the Bama sideline and, in a concession to emotion, gestured toward the Tide players and staff.

Anyone who cheers for the underdog will be enthralled by the story of Auburn’s 1972 football team.

The Tigers were predicted to drop into the bottom half of the Southeastern Conference standings after losing quarterback Pat Sullivan, who won the 1971 Heisman Trophy, and All-American receiver Terry Beasley. Going into their opening game, they had only five offensive plays.

Auburn proved its critics wrong all year long, capping an unbelievable season with a jaw-dropping upset of Alabama, returning two blocked punts for touchdowns in the game’s closing minutes. Instead of finishing in sixth place in the SEC, the team finished fifth—in the country!

The Amazin’s, as they were nicknamed, won as a result of the bonds they formed during grueling winter workouts and August two-a-day practices under the unforgiving Alabama sun. Fifty years later, the Amazin’s still find strength in each other, facing new challenges as teammates for life.

If you cherish Auburn football, great rivalries, and want to learn how to apply lessons from the gridiron to everyday life, then you’ll love this inspiring story of the university’s most unforgettable team—then and now.

Jeff Miller is an Auburn University graduate who has written about college football for publications in Alabama, Florida and Texas. His work has also been published by ESPN.com, and he served as an editor for The Athletic and CBSSports.com. Among his previous seven books are an oral history of the zany American Football League of the 1960s (“Going Long”), the little-known tale of racial integration of major college football in Texas (“Game Changers”) and an inside look at the eight West Point seniors from the winless 2003 football team who then went off to war (“Football Fields and Battlefields”).