Naval Aviators are a close-knit group, almost a clan. It is because they have shared the same training, experiences AND harrowing experiences. Mostly Alpha males with Type-A personalities they are achievers, courageous, maintain health, not afraid to make decisions or to express opinions and usually control their emotions. One example is when a warning light flashes on in the cockpit. It may be “fire” or maybe “hydraulic failure” etc. The competent pilot immediately checks everything, then if he can’t find anything wrong with the controls or other observation, he keys his mike and mumbles to his RIO, “Fire warning light, pulling breaker, prob’ly be all right.” RIO dutifully responds, “Roger that.” (Well what else is there to do?....crawl out on the wing and shoot a fire extinguisher up the jet intake?) Naval Aviators have a macho aura that is either natural or they work at maintaining it. Swagger might be a good word, but it’s old-fashioned. (More appropriate might be “swigger” since they often enjoy significant amounts of alcoholic beverages.) In previous discussions that Centurian achievement of 100 traps and the “Flaming Hooker” initiation rite are somewhat symbolic. Somebody, sometime in the past called a tailhook sparking on the deck at night, a “flaming hooker” and it is part of the macho language now. 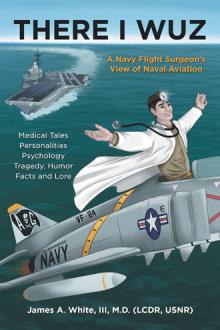 This book is a personal potpourri of navy facts and lore; unique medical perspectives and tales; personalities, psychology and philosophy; tragedy, humor and more ... an insider's view of the inner workings of naval aviation including the amazing bond of those living and working on a modern supercarrier.

Dr. White has broad understanding of the medical and psychological aspects of naval aviation from both training and experience. His intelligence, sense of humor and storytelling skills are obvious. Dr. White is a practicing ENT physician and allergy specialist. He is a past president of the Louisiana State Medical Society and a past governor of the LA-MISS-TENN District of Kiwanis. He has traveled the world and has extensive experience with wine including as a judge at the Los Angeles County Fair, as the proprietor of retail, wholesale and import wine companies, as a member of numerous well-known wine societies and founder of others. Dr. White is an avid and knowledgeable fan of all aspects of naval aviation.