A Century of Auto Repossession History 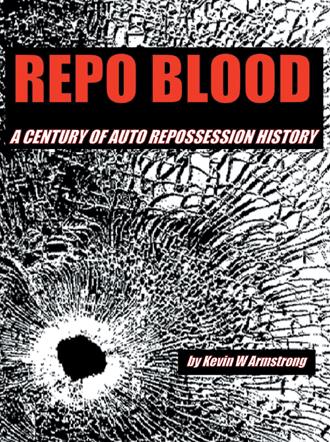 KARMA HATES A SNITCH
Fatal Shooting Occurs at McGee Creek, Mono County Finance Company Adjuster Shot As He Attempts to Repossess Automobile.
McGee Creek, CA – September 26, 1932 - Jorie Thos. Medqueaux, age 31 was fatally wounded from a gunshot fired by Chas. Philbrick at McGee Creek Sunday about 8:45 a.m. and died at the hospital in Lone Pine after being brought here for medical treatment at about 4:30 p.m., of the same day. Shortly before he died, he signed a statement accusing Chas. Philbrick whom two of Medqueaux’s companions, Clifton Henigan and Donal Roberts, testifying at the coroner’s inquest stated that they had witnessed the shooting.

According to their testimony they accompanied Madqueaux, an automobile finance adjuster from Los Angeles (300 miles away) who was to repossess an automobile from Philbrick for the Auto Bank on which payments were in arrears. Having gone to the house to inform Philbrick, Henigan and Roberts remained as Henigan getting into Philbrick’s car to inspect the registration slip to ascertain for sure. Philbrick returned to the car first and dared Henigan out and taking the (driver’s seat, drew a pistol from the car pocket, put it in his belt and started to drive away.

Madqueaux stepped on the running board and as he did so as a shot was fired by Philbrick. Seeing Madqueaux fall to the ground and Philbrick alight from the car, revolver in hand, the two companions abandoned their car and ran for safety and gave the alarm, notifying the authorities. Philbrick was placed under arrest and placed in jail at Bridgeport. Madqueaux was rushed to lone Pine Hospital in a critical condition and died only a short time after his arrival, the bullet having entered his left side passed through the body, lodging slightly under the skin on his right side. Madqueaux’s relatives residing at Detroit, Michigan, were notified. - Big Pine Citizen (Inyo County, CA) -September 26, 1932

Since the beginning of auto lending there have repossessions. While there have been documentaries about the industry, these are often only small fragments of the truth and the reality is much larger, real and dangerous than even many in this secretive world may know. “Repo Blood” blows the doors off of common perceptions and goes all of the way back to the industries origins, evolution, it’s leaders and of course, the many lives lost performing this necessary function of the American economy. This is a history never before assembled and presented to either the public or the repossession industry. Through interviews with the industries leaders and early agency owners, we have been able to reassemble a lost past. With these leads and countless hours spent scouring over a one-hundred years of newspapers helping piece together it’s early pioneers and it’s dark past. Its current status reveals a troubling future for both the repossession industry as well as the American economy. Regardless of your level of industry knowledge, this book illuminates a misunderstood, forgotten and previously unknown past.

Kevin W. Armstrong, a native of the San Francisco Bay Area in Northern California, has been writing and following the repossession industry through his websites CUCollector.com and CURepossession.com since 2010. His connection to the industry began in 1990 when he worked as a field adjuster for three years before becoming an agency office manager. He has spent twenty years in the banking and credit union sectors as a vice president of collections and director of consumer lending.