Local Lives in a Global Pandemic: 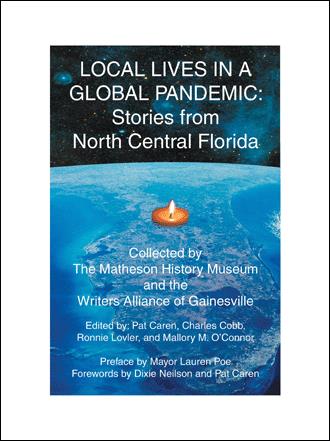 Other than a handful of epidemiologists, few had an inkling of what 2020 had in store for us. Diseases such as smallpox, the bubonic plague, and cholera were things of the past. Modern medicine had contained, if not conquered, such pestilences. Even the Spanish Flu pandemic of 1918 was but a small chapter in the history books. Such things couldn’t happen in the 21st Century, could they?

Most of us were blindsided. Early in the year, when reports of a new coronavirus began to circulate and scientists warned us this could become a global pandemic, we thought, how bad could it really be? Recent decades had brought us scares: Ebola, SARS, dengue fever, Zika. These had caused deaths, certainly, but for relatively few people. Public health practices and medical care kept most of us safe. We expected the same with this new disease.

We weren’t far into 2020 before our perceptions began to change. In late February, the Centers for Disease Control warned that everyday life could be disrupted. By early March, handshakes were out, elbow bumps were in. I attended a function where, instead of serving ourselves from the buffet, servers standing behind a Plexiglas barrier asked what we wanted and filled our plates for us. Travel was restricted. Rumors of quarantine began to circulate. Elderly people began to isolate themselves.

Mid-March, the world changed. Schools were closed. People were told to stay home and, if possible, work from home. Sports events were cancelled. I doubt science fiction writers could have foreseen what was in store for us. Even our language has changed. Social distancing has become a verb. “Stay safe” has replaced “Have a good day.”

The Matheson History Museum in Gainesville decided to record history in the making and create an archive of the thoughts and experiences of ordinary people during this pandemic. A handful of community members contributed artwork, photography, and narrative accounts. The suggestion that these be complied in a book was made. Ronnie Lovler and Mallory O’Connor, who have connections with both the Matheson and the Writers Alliance of Gainesville, thought that local writers would be a good resource. As WAG president, I threw my lot in. Thus, a partnership was formed. University of Florida Professor Charlie Cobb, who is on the Matheson Board, joined our editorial team.

Local Lives in a Global Pandemic: Stories from North Central Florida covers the COVID-19 pandemic at its peak in 2020.

It is a snapshot designed to give readers insights into the thoughts and feelings of their neighbors, and for future generations, a window into the real-time experiences of those who lived through the ordeal.

The book includes a preface from Lauren Poe, mayor of Gainesville, and entries from a long list of contributors. The essays were collected by the Matheson History Museum and the Writers Alliance of Gainesville.

Contributions come from writers and non-writers alike. Victims describe their suffering. Medical personnel highlight their struggles. Young people decry being denied rites of passage such as prom and graduation. Teachers, parents, grandparents, public figures, and even a prison inmate give their perspective.

While the stories are drawn from north central Florida, they will resonate with anyone who wants to get a deeper sense of how the world was blindsided by the COVID-19 pandemic.

Pat Caren is a retired teacher and social worker who studied Literature at Eckerd College and did graduate work at the University of Florida. She has been a member of the Writers Alliance of Gainesville since 2013 including a term as President from 2019 to 2020.

Charles Cobb serves on the Board of the Matheson Museum. He is a curator and archaeologist at the Florida Museum of Natural History.

Ronnie Lovler is a freelance writer and editor and a contributing writer for the Gainesville Sun. She serves as an adjunct professor at the University of Florida and Santa Fe College. She is a former correspondent for CNN in Latin America was also a Knight International Journalism Fellow in Colombia

Mallory M. O’Connor, holds degrees in art, art history, and American history from Ohio University. She taught art history at the University of Florida and Santa Fe College for over twenty years. She is the author of two non-fiction books and six novels.