Travels With The Pack 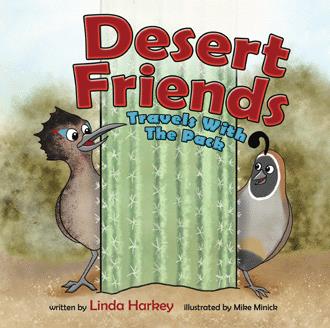 Animal friends in the Arizona Sonoran Desert are found in all sizes, shapes, and colors. Rodney, a brown and black speckled Roadrunner has a shaggy crest, skinny body, a splash of red and blue by his eyes, and a long tail and beak. His best friend Quincy, a gray-brown Gambel’s quail, has a chubby body, square tail, a small bill, and a question mark shaped plume on top of his head.

Later that day, Quincy found Rodney perched on a prickly pear cactus pad near the arroyo. A plump brown and grey lizard had become an easy target for Rodney.

Quincy squealed as he hopped through the desert floor towards Rodney. “Rodney, what’s that hanging out of your beak? What’re you doing?”

Rodney thought. Wouldn’t you know, Quincy wants to talk while I’m eating. Rodney mumbled as he held onto the lizard. “Quincy, today is the best hunt ever! I just caught my favorite meal—a lizard!”

Quincy glanced at Rodney and the cactus. “Is that a tarantula stuck on the needles of the green cactus pad?”

Rodney sighed. All I have to do is keep my beak partially closed, so my meal won’t fall out! “I picked up this blonde tarantula last night, forced it on the pad to save it for another meal. I thought you might be hungry and want to eat with me. You know, it just doesn’t get any better than this—food, water, and friendship—all in one meal!”

Poor Rodney. He opened his beak too wide.

Thud! Plop! Plop! The lizard bounced down the flat pad cactus, landed on the desert floor, and darted away.

“Kaa! Kaa! Kaa! There goes your lizard. I wonder if he’s going to the Lizard Café for lunch?” Quincy chirped as he turned his head towards the cloud of dust following the lizard.

Animal friends in the Arizona Sonoran Desert are found in all sizes, shapes, and colors.

Rodney, a Roadrunner and his best friend Quincy, a Gambel’s quail spend days racing each other through dry creek beds called arroyos. One day Rodney and Quincy meet two hunting dogs—Gator and his three-legged buddy Tripod. Danger surrounds the four friends as a thunderstorm sends tremendous amounts of muddy water down the arroyo. The force of water swept Tripod away. Who will come to his rescue? What will happen when the Great One (the dogs human hunter) arrives?

About the Illustrator
Mike Minick is a graphic designer and illustrator based in Tulsa, Oklahoma. He lives with his wife, Joey, and their two children.