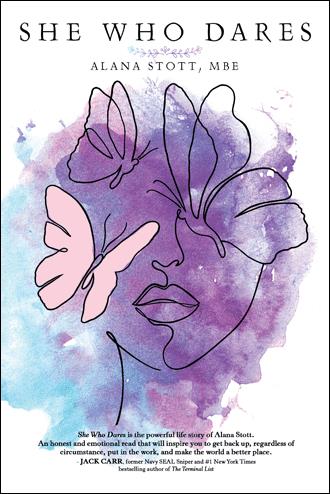 Would our daughter remember him, would she remember how he made her laugh, how they sang and played together, how they danced to ‘Magic Dance’ by David Bowie in the Labyrinth and mocked me for never quite getting the appeal.
“Dean, tell me what’s happening” my heart is racing, and my blood is pumping but to my husband on the other side of the world I appear as I always do. Calm and together. You never show them how you really feel, you keep it to yourself. You have to hold it together because when you fall apart everything falls apart.
This was my life, me home with the baby, managing our various businesses including our security company we set up when he left his life as a Tier 1 operator with the UK Special Forces. He was away more than he was ever home, and on his return, I was usually cleaning blood off his shirts or hoovering sand and residue from his rolling thunder bags. Residue that often transferred to all our own things including an embarrassing episode travelling through airport security when my 10-month-olds pushchair tested positive for explosives, and I had to convince customs that me and my baby girl had no intention of blowing up the plane that day.
This call, it was different, he sounded different, not scared, that wasn’t a sound I would recognize anyway, it was worry, anxiousness and a sound of disturbance his voice. I had to stay calm and focused, I needed to get as much information as I could as I had no idea how long the line was going to stay active, I needed his exact location, who he was with and what the current situation was, every little detail could prove to be crucial information.
It was 2014 in Libya, and I would actually be surprised if I didn’t hear gunfire in the background. Over the summer of 2014 Libya descended into civil war between two opposing militia both with an aim of taking control of the government after Gaddafi was taken out. Arab spring had brought a new way of life to Northern Africa and had given ISIS a fresh opening the Mediterranean coastline. Dean had been there before, during and after it all and the ringing sound of bullets and fireworks was never far away when he called. This time however the sound was different. The blasts sounded close by, multiple and my sixth sense, gut feeling, Spidey senses, whatever you may call it, this time it was different.
I knew he was on the ground near the UK Special Forces troops however I was acutely aware they were there to observe only. If there was trouble on the ground Dean would be on his own. He had allies there though, Dean always made friends with the locals, and they were always drawn to him. If they were in trouble, he would protect them against everything. This was what worried me. The selfish part of me wanted him to walk away from trouble and put us to the front of his mind but my heart knew different. That was why we fell in love, neither of us were the type to stand back and watch someone get hurt. We were both raised tough, we learned to look after ourselves, look after the vulnerable and I knew neither of us could ever walk away from someone in danger.
The gunfire is getting louder and louder, I hear the phone drop to the ground as loud bangs pierce into my ear. The sound penetrates my ear so much, I have to pull it away to stop my eardrums exploding. These bangs are coming directly beside the phone. Is he being fired upon or is Dean the one firing, I can’t tell? In this situation he must keep his focus, do I hang up the phone? What if he needs me, what if I can’t get back through? He has other colleagues and business partners who should be helping him but as usual when Dean is on the front-line taking risks, they can often be found sipping wine and counting the profits. Who could I call, there was no one Dean was on his own, I can’t hang up?
As I sat there on the kitchen floor another loud bang comes, this time much closer to me, the kitchen door flies open and a 3-year-old comes running in “Mummy, I’m hungry!” Hungry, wow she picks her moments. Why doesn’t she understand appropriate timing yet? But up I get from the floor phone still in hand, paint on that big mum smile, place my hand over the retriever and ask her quietly what she would like. When you live this kind of life, you have to balance everything, she doesn’t understand what I do and what I’m doing at any given moment in time any more than he doesn’t understands what the other side is like. I have to keep the chaos and the calm as normal as I can for both of them.
I am the mum, wife, businesswoman, housekeeper, peacekeeper, and family accountant, and I have to be all these things, at the same time, while not allowing each role to influence the other, they have to stand together while carrying their individual traits. I should have been given a role on The god damn Greatest Showman. I quickly pull together some snacks with (questionable health benefits) though at this point, I genuinely don’t care. I turn on some back-to-back Peppa Pig in the Lounge and get back to the call as quickly and of course calmly as I can.
I listen for a while, and then hear his voice:
I try to gauge which, bridge, where are they, the gun fire is getting louder, I need more information.
“Dean?”
“They are on their own Alana.
“I have weapons.”
“I can’t leave them.”
A hail of gunfire rings through my ears as the line goes dead.

It was 2014 when the phone rang at Alana Stott’s home. On the other end was her husband, Dean, a member of the UK Special Forces serving in Libya in the midst of a civil war. As the sound of gunfire echoed through the receiver, Alana felt her heart racing as she struggled to gather as much information as possible from him. Moments later, the line went dead.
In a compelling, heartfelt retelling of her epic journey through life, Stott shines an inspirational light on how she navigated through all her personal experiences with candor, humor, bravery, and authenticity. As she leads others through her memories, Stott begins by detailing her childhood where she first learned to advocate for justice, pledged to one day end injustices, and focused on helping others, and then shares insight into her path forward as she traveled the world, married, attained professional success, battled challenges, and eventually summoned the strength and courage to guide her former UK Special Forces husband from enduring life-changing injuries to becoming a world-record breaking champion.
She Who Dares chronicles one woman’s path of self-discovery as she overcame obstacles and challenges to transform into a passionate advocate for positive change.

Alana Stott is a philanthropist and true multi-hyphenate with a unique list of professional achievements that include sales professional, bodyguard, Mrs. Scotland, CEO, Writer, and producer. She is the founder of Wolfraven Inc., a media platform that shares inspirational stories while advocating for causes that improve the world. Alana and her husband, Dean have three children and reside in California. She is also the author of the game-changing business and philanthropy book, “How to Ask for Money;” and a series of empowering children’s books “Mollie’s Adventures”.