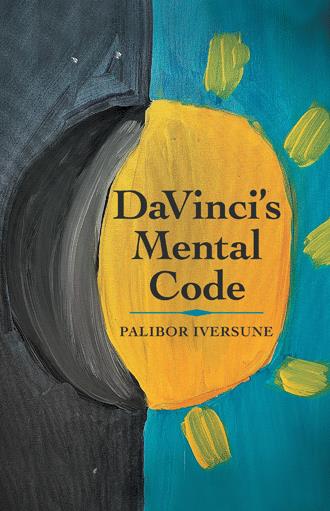 Chapter 5: The Theory The theory presented and detailed throughout this book ultimately works to explain why ONLY the Vitruvian Man’s head was drawn to tilt towards the right half of the large circle within the Vitruvian Man schematic, which is explicitly determinable once the large circle has been dissected—vertically down its centreline—into a duo of equal-sized halves (or hemispheres).
The statement "ONLY the Vitruvian Man's head was drawn to tilt towards the right half of the large circle within the Vitruvian Man schematic" implies that no other part of Vitruvian Man's body is observed to noticeably tilt toward either half of the large circle. This means the torso, the pelvis, the hips, and so forth are NOT materially observed to tilt toward either half of the large circle once it has been vertically dissected into a duo of equal-sized portions.
Also observed is the fact that the Left eye of the Vitruvian Man was drawn to look (or appear) much Darker than his Right eye (where the Right eye seems to have a more Enlightened look). Furthermore, observed is the fact that an inverted Equilateral Triangle (or an upside down pyramid shape) is shaded surrounding the Vitruvian Man’s left eye, while a more Circular shape exists shaded surrounding his right eye.
Based upon the preceding observational facts, the theory thereby considers that (through his creation of the Vitruvian Man) Leonardo da Vinci may’ve been evidently inferring that the duo hemispheres of brain are somehow connected to the duo of polarities of our shared cosmos (as previously discussed)—wherein Dark versus Light is one such approach for conceptualizing as much (further discussed in Chapter 7)—of such a dual nature that can also simultaneously exist within any conceptualized "thing" (of a premise also further detailed within Chapter7).
Such observational facts and consideration may lead one to assume that Leonardo knew (over 500 years ago) that the human brain had a duo of hemispheres—given the scientific work he physically performed on human anatomy—and by DaVinci drawing ONLY the Vitruvian Man’s head tilting towards the right hemisphere (or halve) of the dissected circle that as much may be part of encoded hinting (or cues) related to a broader cryptic message (of such a proposed message further discussed throughout this book).
Resultant to such exposure (or revelation), it’s thereby proposes that the Vitruvian Man schematic (in part) is an artistic commentary on Sacred Geometry identified NOT ONLY within the physical realm—as embodied within human anatomy, as previously determined by the Ancient Roman architect Marcus Vitruvius Pollio—BUT ALSO upon as much within the non-physical realm (specifically concerning Mentalism; term previously defined) whereby such Sacred Geometric patterns could identifiably exist within the shape, state, or condition of human psychology and behaviour.
In other words that by Leonardo, within the Vitruvian Man, recycling the determinations of Vitruvius—over 1,400 years beyond such ancient discovery—that Da Vinci was NOT ONLY paying homage to Vitruvius for such intelligent Sacred Geometrical analysis (hence the honoring name of the schematic) BUT ALSO, by Da Vinci using such an elaborate artistic format for reissuing (and showcasing) Vitruvius's physical realm determinations, that such a design could serve as an ingenious display to embed encoded messaging concerning Sacred Geometrical patterns that he may’ve conceptualized exists as per the less obvious non-physical realm (primarily relating to that of the psychological, or mental).
Any legitimate efforts to determine the reason for why Leonardo da Vinci may’ve deemed it necessary to curiously embed such proposed messaging within the Vitruvian Man schematic perhaps would require an additional book of largely speculative nature.
This Vitruvian Man theory revolves around 4 main notions:
1. Sacred Geometric analysis can be employed towards identifying such non-physical patterns associated to psychology (or within Mentalism), and possibly also applicable within such analysis of resultant shapes, states, or conditions of any related behaviour chosen to be actuated into the physical realm
2. The reason such theorized messaging is embedded within the schematic’s design is, in part, to issue timeless warning upon potentially dangerous elements considered existent (or perpetually looming) within the observance (or cerebral adoption) of a certain philosophical approach (or mental system) identified as constitutionally part of Hermeticism; whereby such a proposed warning would directly relate to why Da Vinci drew ONLY the Vitruvian Man's head tilting towards the right half (or hemisphere) of the schematic’s circle once vertically dissected
3. Once necessary awareness has been established, Dualism becomes more obvious to observe within both the realms of the physical and non-physical
4. Leonardo da Vinci inevitably became to study certain Sacred Geometric approach and perspective
More full technical analysis of the Vitruvian Man schematic, as it pertains to the theory brought forth throughout this book, is found within the section titled "ADDITIONAL NOTE FOUR" (being the final section of this book).


Chapter 6: Hermeticism
The theory proposes that Hermeticism, Sacred Geometry, and Dualism, are 3 philosophical (or metaphysical) approaches of disproportionate importance (furthered below) for the purposes of certain practicing (or practitioner) members of so-called 'secretive societies'; in referring to how as much can be specifically applied within Mentalism.
NOTE: that the term “specifically applied” is considered referable to within a particular seeking and searching (and/or within a sort of science and study) of/for supra-concentrated forms of Mentalism wherein said 3 philosophical approaches can ultimately (disturbingly) be parlayed toward/within keen efforts to discover (or to conjure) potent mental techniques and psychological methodologies associated to Mental Alchemy (term defined within this chapter)
Such aforesaid “disproportionate importance” is meant to be considered within a context of how greatly important these 3 philosophical approaches are proposed to be for these relatively small groups of people, internally to/within such 'societies’, compared to how relatively unimportant these 3 philosophical approaches consciously seem to be for disproportionately larger segments of citizenries (around the world) that socially exist external to such shrouded and esoterically veiled ‘societies’.
For the purposes of this book, Mental Alchemy is defined as:
A comprehensive term for any sort of psychological, philosophical, or metaphysical science designed for/to aid the study, development, and learning of better techniques, strategies, and methodologies for controlling one's own mind and potentially of that of others.
For the purposes of this book, Alchemy solely refers to:
Mental Alchemy.
NOTE: that the term Alchemy historically has also been used in reference to a sort of natural science concerned with the hopeful transformation of base metals (such as tin or lead) into those of greater value (such as silver or gold)

Ancient Greek Paganism revolves around a family story legendarily beginning upon the creation of the universe. Such primordial mythology reveals titanic power struggle within family hierarchy; Cronus the patriarch, Zeus his son, and Hermes (son of Zeus).

As per the story (or myth), Cronus desperately swallowed his baby boy (Zeus) to preserve his own power. This monstrous act was diabolically enheartened by an oracle predicting that the unborn Zeus would grow to overthrow Cronus just as Cronus overthrew his father (Uranus).

Hermes is said to carry a staff—the Caduceus, adorned with snakes and wings—currently serving as an institutional symbol for modern medicine. Is as much potentially troublesome? Should Hermes’s ‘magic wand’ be instituted as an emblem for public health? Have modern symbologists missed something here? Any potential occultic affects (or effects) possibly overlooked?

Hermes is innately of Hermeticism. Hermeticism is regarded as a time-tested metaphysical (or theistic) philosophy that has historically thrived within ‘secretive societies’ of Western Esotericism. Throughout recent centuries, Hermeticism has apparently been conditioned to fade from public consciousness whereby being generally ignored by Establishment institutions seems of mutual design.

The book contains theory contending that whether centuries ago, or today, Hermeticism carries an inherent danger upon which Vitruvian Man (DaVinci’s enigmatic drawing) is proposed to issue timeless warning.

Theoretically, Leonardo grew wary of Hermeticism and created his Vitruvian Man (in part) to help shine light on such a predacious doctrine as it Darkly slithered about Renaissance Italy.

DaVinci’s Mental Code began shaping once Vitruvian Man’s left eye was revealed to look much Darker than his right eye, while the ‘dual’ Hermetic principle seemed philosophically (or conceptually) connected.

Palibor Iversune considers himself a citizen of earth while keeping a national passport. He thinks racism is ridiculous yet carries Human pride. Palibor never authored a book before, but somehow it seemed to write itself. If his character reveals paradox, then the ‘culprit’ may be cosmic duality of force. He ultimately believes in an ideal of the One love.