To Kill a Public Crook 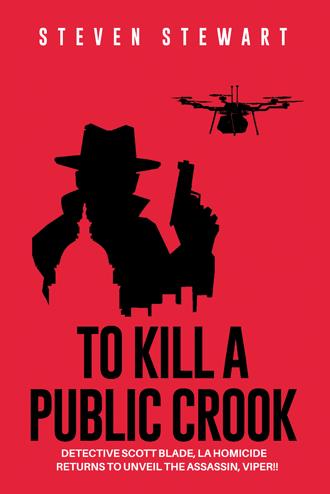 Curt Doyle, AKA Viper, sat in the straight back wooden chair in his hospital room with his bags packed, waiting for his release for what he hoped was the last hospital. After several surgeries and intensive drug therapy, he needed a change of pace. While toying with his coffee, he reflected on the past, a past that was rapidly fading from his memory. The caffeine worked to enhance the anger still raging inside him. He still remembered his aerial combat career and his plan for a fourth tour in Afghanistan – denied by wounds and the powers that be. One of the hospital doctors rejected him because his test results indicated high-stress levels. PTSD became a permanent stamp in his medical file.

Curt had given his all. Now, what the hell was he going to do; take medication and talk to a psychiatrist? The more he thought about it, the madder he got. Finally, Curt Doyle’s programming began to take over all thought processes: We should/could have won that war if it wasn’t for those cowardly goddamn fucking politicians. Someone should cancel their ticket! He sat up straight, reflecting on those thoughts and their implications. He had killed dozens of people in the war and had received medals for his work, but now it appeared that the real enemy was within the United States government – domestic types, politicians. That being the case, where could he start? There were so many of them.

The newly altered man now, Curt Doyle, was being released from the hospital. Mr. Smith introduced to Curt as one of the medical personnel at the secure military hospital arranged to have a furnished apartment in California for Lieutenant Doyle. Twenty-five hundred dollars cash had secured the rent for three months. Doyle would live in this apartment until Mr. Smith completed the purchase of a safe house on the outskirts of town using the governmental funds at his disposal from an offshore LLC. That LLC would pay all expenses in the name of the LLC; thus, no record of a Curt Doyle. Doctor Russ Matt had received higher-up approval to purchase the new house. Mr. Smith would wire the special funds to the California escrow. In addition to the living arrangements, Doyle received a package that contained three separate IDs to use at his discretion.

The man who left the hospital at the Alabama VA clinic in the old body was a new man inside with a different name outside. Curt Doyle sat in the cab’s back seat, headed for the Cairns Army Airport located in Daleville, Alabama. Doyle, AKA Viper, had a flight to catch for Los Angeles, California. Once he was in place and had acted on instructions, their carefully molded puppet would carry out his assignment; to remove public crooks from office.

That evening the phone rang. Curt recognized the unique number. Picking up the receiver, he listened to a distinctive tone lasting several seconds. At its end, the voice of his controller said to him, “It’s time to pick up the evening paper and look at pages A-4. Read the article written by Irene Johnson. Make an appointment to see her, get to know her, use her. She has information that you’ll need to know about Senator McVane. Seduce her, and she will supply the required scheduling information to accomplish your mission.” The voice stopped speaking, and the tone returned for three seconds before the line went dead. Curt slowly replaced the receiver, picked up the evening newspaper, and read the article written by Irene Johnson, political election manager for Governor Catherine Bronson for President. Fascinated by her writing and her photo, he would ask her for a meeting to donate to Bronson’s campaign, thus gaining an inroad into the electoral process. Any information gleaned would help to facilitate his plan. Curt placed the compulsory call to Miss Johnson’s office the following day and volunteered to help get Bronson elected.

The next page of the newspaper revealed Conrad McVane, the presidential candidate groomed by big money syndicates. He’s the senator that took away the money to continue the war in Afghanistan – and put me out of work. I sure would like to see that SOB dead, Curt thought to himself. How could one do the job and not get caught?

The beginning of a plan began to surface. The more he worked on the idea, the clearer his objective became. Inside his head, he knew that he had to kill McVane. That concept was now his sole purpose. But how to do it? What type of device would be best for the kill – a gun, a bomb, a sniper rifle? Curt chuckled to himself as he thought he could fly in and do the job right if he had his Apache helicopter on hand. But he knew that he couldn’t steal an Apache. There had to be a different and better way, one that would let him be elsewhere at the moment of execution, in the right spot at the right time but not exactly there on-site at the right time. Curt remembered a line from Sherlock, ‘Watson; this will be a two-pipe problem. Difficult but not impossible,’ he mused as a vision appeared in his mind of a small flying machine, a drone! 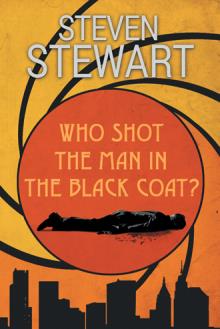 Who Shot the Man in the Black Coat?
Steven Stewart
$19.99

A US senator and his mistress have been assassinated on the eleventh-floor balcony of their hotel room – no witnesses. Detective Scott Blade, LA Homicide is asked to head a fugitive task force to solve the crime. Blade enlists Detective Coraline Steele, Beverly Hills Homicide, his fiancée, to join the hunt for the assassin. Before they get geared up, a second senator from another State is assassinated in his boat while fishing alone –no immediate body.

FBI agent Tomaso Girardi is sent by presidential assignment to meet with the detectives to gather pertinent information about the murders. Their investigation reveals a sinister plot inside the executive branch to overthrow the current president.

Professor Stuart, a brilliant engineer/Astronomer calls LA Homicide describing a long-distance photo his students took, showing what clearly looks like a drone whizzing past the hotel at the time of the first senator’s death.

Paralleling the murder investigation, another story begins to unfold – that of an ex-Army pilot that seems to have changed names and is the potential killer. Driven by mind-altering drugs and evil government manipulators, Curt Doyle, aka Viper, is on a mission to annihilate corrupt politicians. But will he stay true to his directives? He begins to wonder who is controlling him and why.

As Doyle’s mind clears, he decides to defy his “orders” and use his drone one more time…

The search begins for Viper and his drone. The ‘game is afoot’ for both parties.